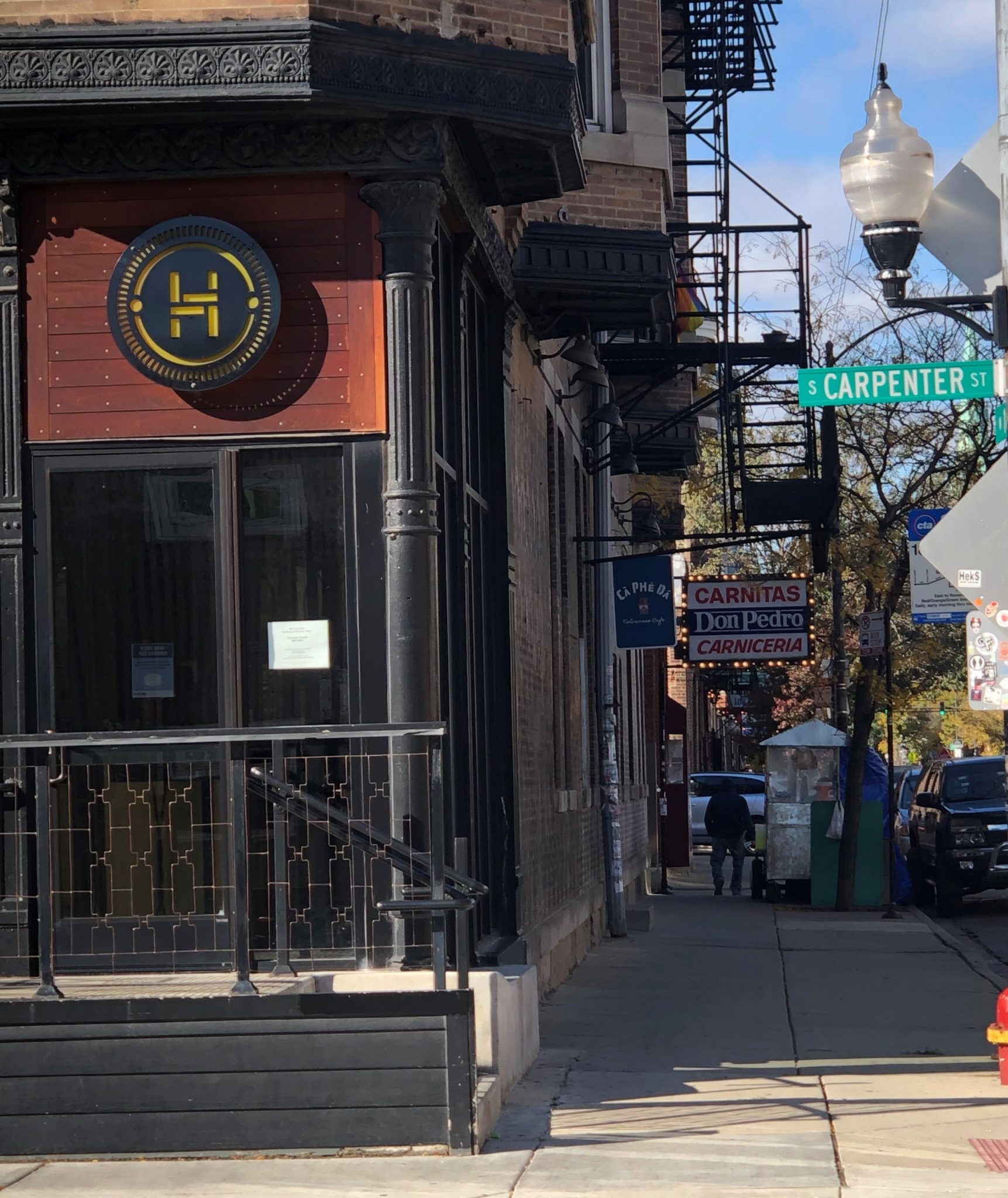 On an especially chilly morning in late October, Thai Dang bounded up the stairs to HaiSous after returning from his trip to the local market. Dang dressed for the weather but pulsed with energy—the thirty-six-year-old has lived here long enough to know what to expect.

2020 was a challenging year for restaurants across the country, and the coming months look grim for the industry, with indoor dining prohibited, for now, and the weather getting too cold for outdoor dining. But Dang has overcome adversity throughout his successful career, and is meeting the challenges with characteristic energy and a smile on his face.

In the winter of 1990, Dang was a six-year-old in Champaign-Urbana, Illinois. He was the youngest member of a newly arrived family of eleven Vietnamese refugees. Now known as “Chef” to most, Dang owns and operates the Michelin Guide-listed Vietnamese restaurant HaiSous, and the attached cafe and bar, Cà Phê Dá, in Pilsen, with his wife and business partner, Danielle.

Dang was born in Vietnam in 1984, in the wake of the war. Vietnamese is his first language, but he speaks English at a rapid pace. He’s self-conscious about dropping the “s” off his plurals at times.

“My mom always made sure we spoke Vietnamese at home,” Dang says. “My brothers and I would argue in English and she would say, ‘That means you’re talking shit about me, it’s disrespectful!’”

The Dang family relocated to Northern Virginia from Champaign-Urbana in 1992, when Dang was eight years old. While his family lived there, Dang learned how to cook around age ten from instructions that his working mother would leave so that dinner would be ready by the time the family got home.

“We always ate together around the table,” says Dang. “There were no ifs or buts. You waited until dad sat down, said grace and boom, everyone ate together.”

At the beginning, the tasks were simple. As Dang grew older and proved to his mother he could handle more, he learned intricacies like frying chicken—a skill that serves him and his customers well at HaiSous, where he plates up his famous wings with caramelized fish sauce and chilis.

After a lazy high school career in Virginia, Dang took culinary classes at a local community college, and went on to enroll at the now-closed L’Academie de Cuisine in Gaithersburg, Maryland where he studied French cuisine and techniques.

“I excelled in it naturally because I already loved it,” Dang says about cooking. “I had a passion for it.”

Dang put his newly sharpened skills to the test throughout the Washington, D.C. culinary industry from 2004 to 2009, where he met Danielle, then an architect. The two moved to Chicago in 2009 when Dang was offered a position at the now-closed L20, where he helped the restaurant earn three Michelin stars.

At the age of twenty-six, chef Dang and Danielle partnered In 2012 with Attila Gyulai and his wife Komal Patel to open Embeya, a modern take on Southeast Asian fusion cuisine. A year prior to the closing of Embeya, after firing Danielle, Gyulai fired Dang as well. The tumultuous saga and closure of Embeya was well documented by Chicago’s media in 2016 and the fallout was difficult for Dang. Gyulai and Patel disappeared after the restaurant’s closure and left Dang and his brother with massive debts.

As he and his brother continued to pay the loans, Dang was looking forward to opening a new restaurant, but also found himself in an emotional malaise.

“Things all crumbled down—it sucked,” says Dang. “I didn’t know my self-worth. One day, I had the hottest restaurant, I was in Esquire, you know? Then, one day, it was me, reading about myself being fired from my own company. It was dark days of just loneliness, sad times.”

“Embeya was dear to my heart,” Dang says. “It means ‘little one,’ which was my nickname growing up. But sometimes, you have to let go. But I was holding onto it. It was very painful.”

The normally bubbly chef was disappointed after being fired but found solace in returning home. Dang and his wife would visit Vietnam for a few weeks or a month at a time to “get inspired again.”

In opening HaiSous and Cà Phê Dá, Dang says he wanted to change the way people perceive Vietnamese food. He delights in watching patrons try something new and finds even more happiness when Vietnamese customers visit.

“The beauty of what we created is that Vietnamese people will come here, and they’ll say, ‘This is not Vietnamese food,’” Dang says. “They’ll put up a barrier, but once they eat it, that barrier comes crumbling down.”

Dang exudes energy while he speaks about cooking. Danielle Dang says he’s like that all the time.

“He wakes up like this,” Danielle Dang says. “Sometimes I wake up and I think, ‘We have to do it again?’ But Thai is just like, ‘let’s go.’ He’s a stand-up guy. No matter what, you get the same Thai, every day.”

Bryan Rodriguez, a sous-chef who has worked at HaiSous for three years, sees Dang in a similar light.

“Whatever you just experienced right now, that’s Chef at all levels, at all times,” Rodriguez says. “He’s very amicable and likes to accommodate you if you want to explore something. This is who he is, his attitude never changes.”

While his attitude may not change, Dang has proven adaptable in the face of calamity. For the second time in a year, Chicago has prohibited indoor dining, but Dang hasn’t given up hope. After pivoting from the reduced-patron tasting menu that HaiSous was serving to follow Chicago restrictions, the team introduced a $40-per-person dinner and cook-along experience.

Rodriguez says he admires his head chef’s drive and level of respect for everyone around him. “He wants to better himself as a person and as a chef.”

This is evident when watching Dang in the kitchen, as he races his chefs in cooking challenges like breaking down a side of beef or filleting a whole fish. With speed and accuracy as the objectives, shouts of “I told you so” ring out from the open-air kitchen as seconds are shaved off records.

Rodriguez also says he admired Dang for hiring all Pilsen natives to work in the restaurant when it opened. When the pandemic hit Chicago in March, restaurants were forced to shut down. HaiSous used their perishable items to provide free meals to Pilsen families in need.

Since opening in June 2017, HaiSous and Dang have been involved in conversations about gentrification amidst a rapidly changing Pilsen neighborhood.

In 2018, ChiResists, an activist group in Chicago, organized a boycott of HaiSous after an Instagram story posted by Dang drew criticism. (The organization did not respond to a request for comment.)

Dang is puzzled about the negative feelings toward him and his restaurant in Pilsen.

“I’m an immigrant. Daddy didn’t give me a million-dollar loan. This came from losing everything and rebuilding again,” Dang says. “HaiSous came from a place of love, of compassion. We want to help people in Pilsen earn a livable wage when they work here… it’s about finding ways to connect to the community.

“Empathy is a powerful thing,” Dang says. “Whatever we do, we do it from our hearts, and we just keep going.”

Great article! In depth reporting reveals awesome character and depth about Mr. Dang and his wife. Makes me want to drive to Chicago (from Michigan) and camp out at HaiSous for some great Vietnamese chow!