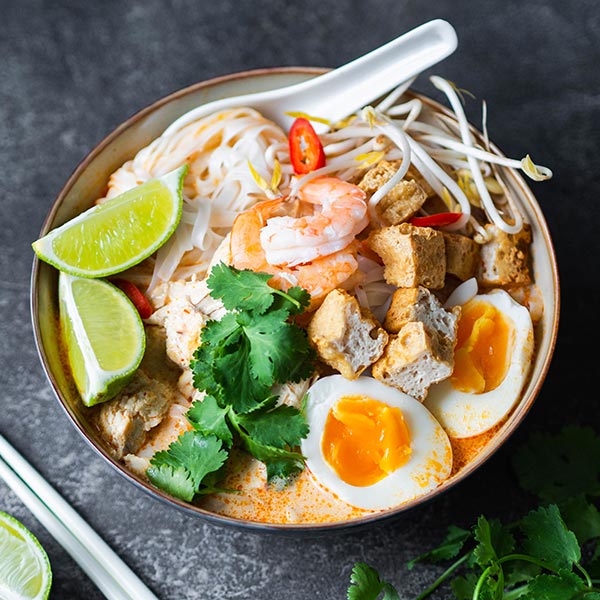 Peranakan food is found in Malaysia, Singapore, Indonesia and other Southeast Asian countries where Han Chinese have migrated over the centuries. These immigrants integrated with their newfound communities, and Peranakan food represents a marriage of Chinese cuisine with the unique foodways of the regions where these settlers found home.

Kapitan opened in Chicago in late December 2020 at 2142 North Clybourn, and it’s serving Peranakan food for takeout or delivery. Starting from a base of Chinese ingredients and preparations, Peranakan food has, over time, been modified to suit the tastes of the many regions where the Han Chinese settled.

Sometimes you see a new food and just want it, immediately. The first time I spotted couscous, it was the early seventies. I saw this now-common-to-America food served from steaming troughs at a French student cafeteria. Just looking at the couscous, I knew I would love it, and I did. I got the same tingle the first time I saw Otak-Otak, which I had for the first time at a Singapore hawkers’ market a few years ago: a mixture of minced fish and spices, steamed in a pandan or banana leaf, very moist and flavorful, love at first bite. Otak-Otak is served at Kapitan in smaller portions, and we greatly enjoyed the layers of flavor, with acidity coming from kaffir lime, slight sweetness from coconut milk, and the savory fish, all seasoned with chili, turmeric, lemon grass and betel leaf. Ingredient availability is always a challenge with Peranakan food, and Kapitan owner Victor Low says “The betel leaf was the hardest ingredient to find in Chicago, but we found what we needed at a Vietnamese market on Argyle.”

Murtabak is a contribution from the Peranakan who settled in Java. The Murtabak at Kapitan is flatbread topped with egg and beef, suitable for breakfast, lunch or dinner. All three daily meals are served at Kapitan, which offers its full menu all day.

The Nyonya Curry Laksa Lemak was our favorite of the dishes we ordered. This soup contains fried tofu, shrimp, chicken, fish balls, hard-boiled egg and mushrooms in a coconut-milk-based broth spiked with chili paste. The cool creaminess of the soup is perked up with the chili heat, and sipping the soup makes different parts of the tongue come alive with the richness balanced by spice, and textural variation provided by the contrast of the crunchy crouton-like fried tofu cubes and the softer textures of the fish balls, egg and mushrooms. “In Malaysia,” Low says, “our Laksa Lemak is less spicy than other parts of Asia, and more creamy. The noodles are also a little different than rice vermicelli or egg noodles; they’re very close to spaghetti noodles, but not so starchy. They’re a little slippery, and they dissolve in your mouth.” 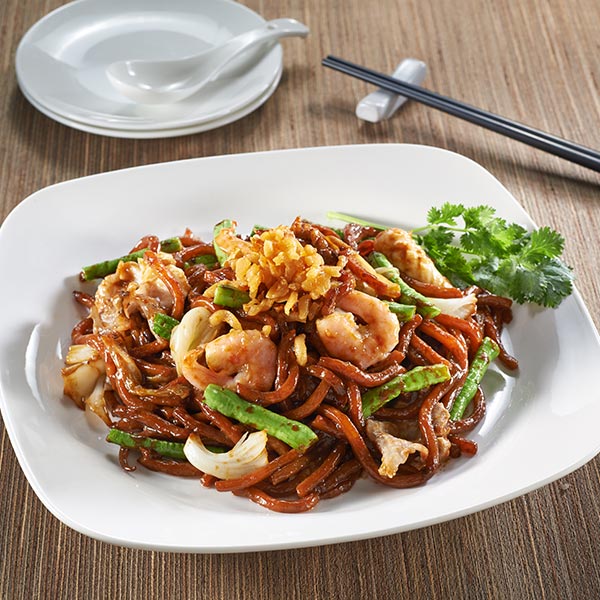 The Hokkien Char Mee is a dish that eats like other noodle dishes you’ve had in Chinese restaurants: a bed of noodles topped with vegetables and protein. While it originated in China’s Fujian province, there are regional varieties from Penang, Singapore and Kuala Lampur. Kapitan offers the Kuala Lampur version and the noodles are thick and browned from braising in soy sauce.

Hainan Chicken is on the menu, and it’s another good example of how a Chinese dish can be modified to suit the local population. We had our first taste of Hainan Chicken on Hainan island, China, and when it was brought to our table, we thought there must have been some mistake: the very white, poached chicken was neatly sliced and beautifully presented with the skin removed, but the chicken was surprisingly blood red at the bone, something you don’t see often in the States. At Kapitan, the chicken skin is “crispy golden brown,” and it’s cooked through-and-through. This could be the way it’s eaten in some Southeast Asian countries inhabited by the Peranakan, or it could be another modification to the cuisine demanded by the local environment. Can you imagine Chicagoans being fed bloody red chicken? Me neither. This is not the Hainan chicken served in Hainan, but as Low says, “There are many kinds of Hainan Chicken.

“Peranakan food goes back to at least the 1400s,” Low continues, “and it represents an intermarriage and intermingling of cultures; it brings people together, which is especially important right now. [Low and I spoke the day after the assault on the United States Capitol.] The Peranakan people learned to get along with the people of different countries, and that union of different types of people is represented in the dishes. In Peranakan food you see the harmony of cultures coming together.”

The variability of Peranakan food stymies those who may seek out markers of authenticity to confirm their judgement of a restaurant’s quality. Authenticity is always a slippery standard, perhaps no more so than with Peranakan food, which, by its nature, transforms itself and mutates to match the region where groups of Peranakan immigrants have settled. Perhaps more than any other restaurant we’ve visited, Kapitan asks you to suspend your need to assess authenticity and enjoy the food, accepting it as Malaysian Peranakan, Singaporean Peranakan… Or even Chicago Peranakan.