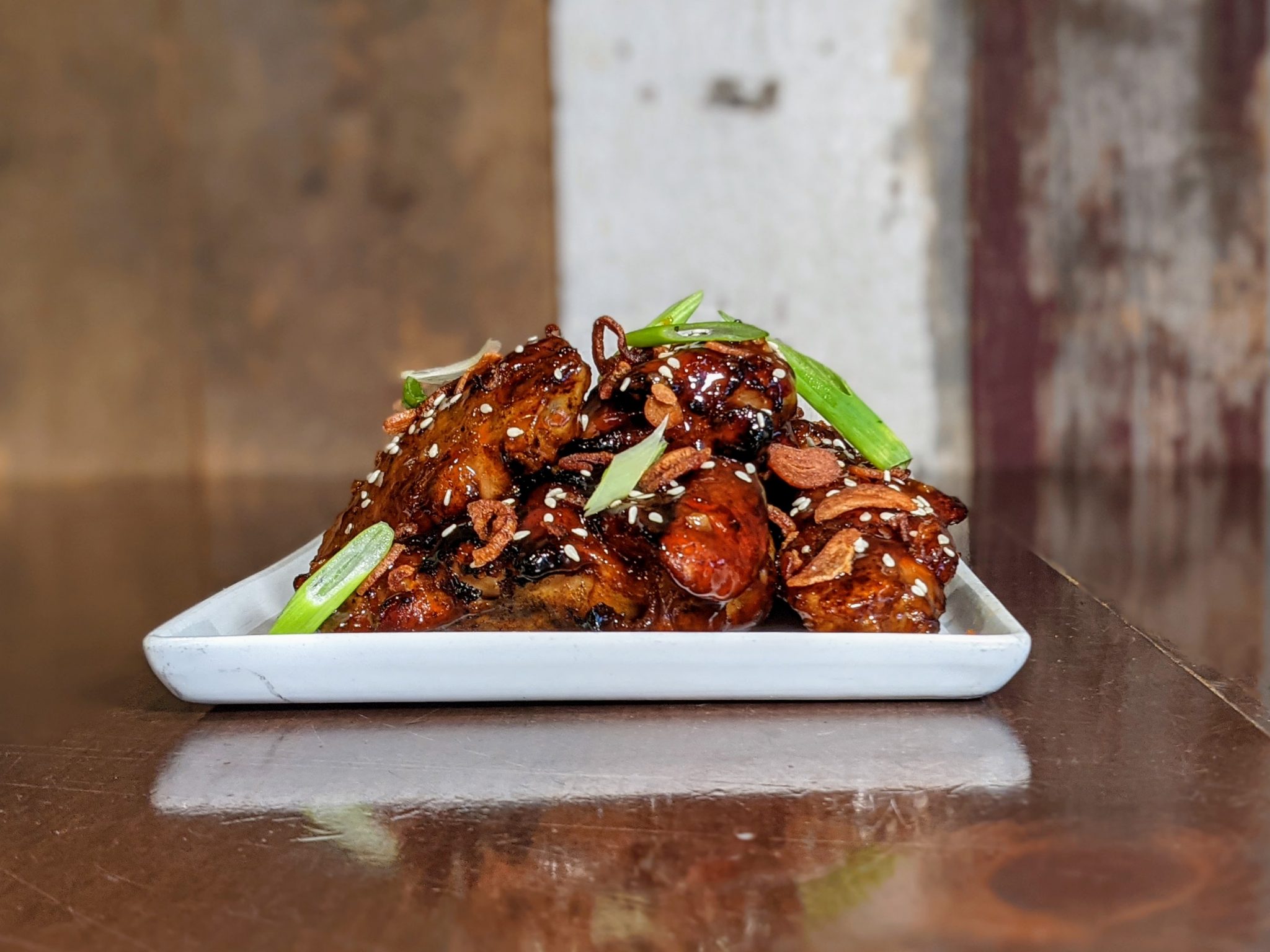 With many of the chickens we’ve roasted over the years, the wings seem to get ignored, stored in the refrigerator until, uneaten, they go into the bag of bones we use to make stock. The wings, like the back and neck, got no respect in our house.

That was then. Now wings are a hot item. Restaurant News reports that Americans ate about one-and-one-half billion wings during Super Bowl LV.

That’s up two percent from last year. “There are several reasons for the uptick,” says National Chicken Council spokesman Tom Super. “If you think about it, restaurants like wing joints and pizza places were built around takeout and delivery, so they didn’t have to change their business model that much during the pandemic. Wings travel well and hold up during delivery conditions. Plus, they align with consumer desire for comfort food during the pandemic. Chicken production remained steady in 2020, and as long as people are sitting around watching TV and maybe drinking a beer, wings will remain in the game.”

Alas, the downside of this upsurge in chicken wing love is shortages, and the Washington Post announced right before this year’s Super Bowl that “we’re running out of chicken wings.”

Given the popularity of wings during the year’s biggest football game, it’s no accident that Charred Wing Bar in the South Loop (1150 South Michigan) opened right before Super Bowl Sunday.

Wings, to me, hold an attraction just slightly above the potato chips and pretzels that might also be served at a Super Bowl Party. They’re tasty enough, but they’re not very… interesting.

Charred Wing Bar changed my mind about wings. In the hands of good chefs, there’s no reason why wings can’t be just as delicious as a leg and thigh (my personal favorite chicken piece). 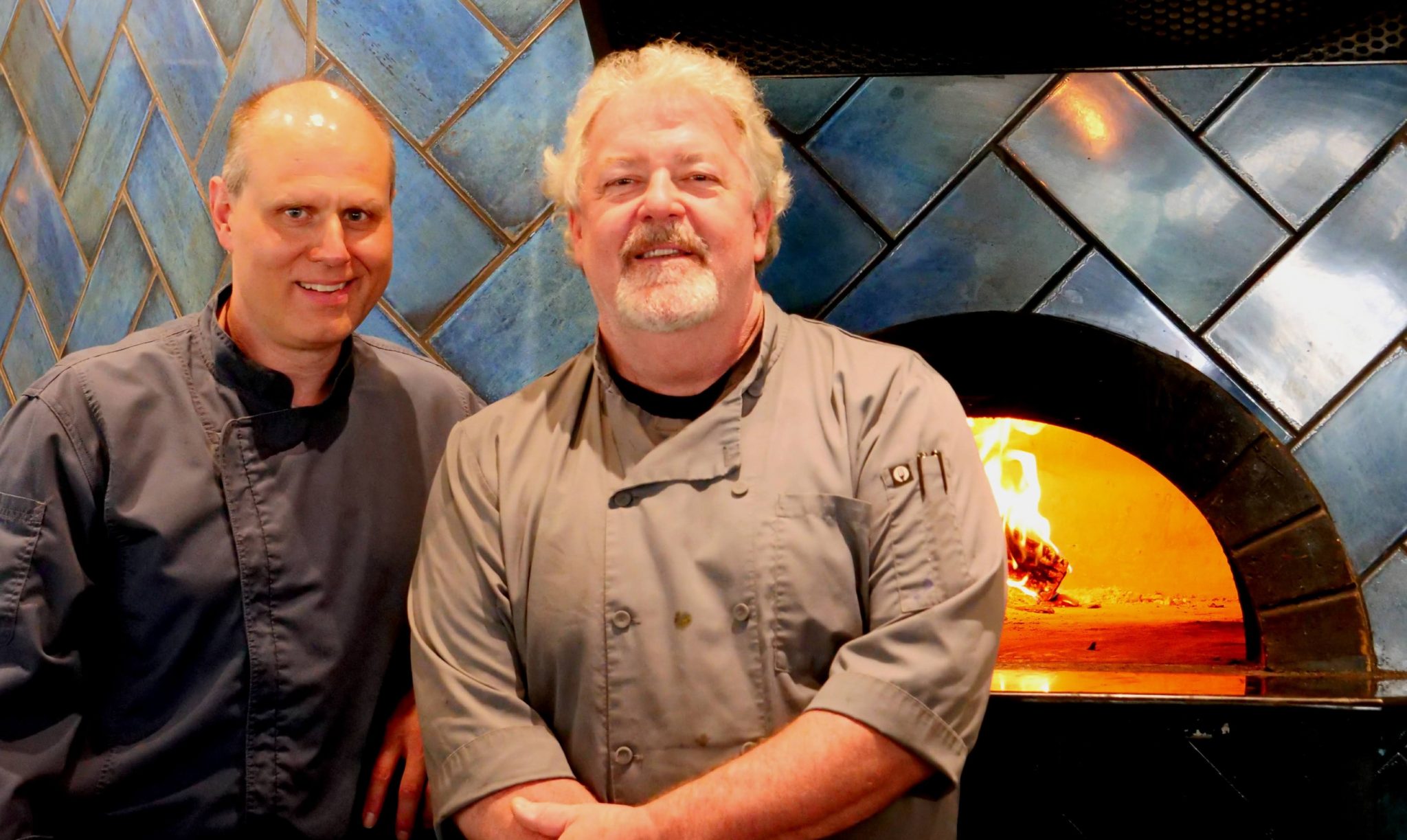 At this ghost restaurant within Burger Bar (with two Chicago locations), chefs John McLean and Martin Murch serve eighteen different preparations of wings, which is around sixteen or seventeen more than I’ve seen offered at places like Buffalo Wild Wings. As the name Charred Wing Bar implies, these wings are not fried, as at other wing-centric restaurants like Wing Stop.

Grilling means the wings “are healthier and moister with less fat” in comparison to breading and frying the wings, says Murch. “Fried wings are less healthy, dry out the poultry in the fryer, and are usually coated in breading that becomes soft and pulls flavors from the taste of the wings. And we’re using a premium product, all fresh jumbo wings, and we are curating them on the grill, tending them carefully so that they don’t overcook.”

“We’re trying to create an elevated version of wings: ours have always been grilled, not fried, and our proprietary rubs and marinades make our wings special,” adds McLean. “Over the years, at Burger Bar, we’ve come up with some recipes that have been inspired by our travels, things that we’ve seen and tasted over the years. On our menu at Charred Wing Bar, you’re going to see a lot of global influences.”

That international focus struck us as what’s most interesting about Charred Wing Bar. The wings at many restaurants have a sameness to them, tasty enough, but edging on the monotonous.

Charred Wing Bar has a range of preparations that reflect the global influence. Here are three:

Thai Red “Curry Fury.” McLean has traveled in Thailand, and so have we, and I’m guessing none of us had wing preparations quite like this in Thailand. It seems, however, that the intent with these wings is not to duplicate a Thai preparation but rather to use certain elements of a traditional Thai preparation (chilies, peanuts, limes) in the service of a wing richly sauced with coconut curry.

Korean “Glazed Goodness.” A mess to eat, the Korean culinary contribution to the Charred Wing lineup is sauced with a slightly sweet glaze, as are some versions of Korean wings. The basic recipe for Korean wings allows for considerable variation, so this kind of Korean-inspired dish is likely to trigger self-appointed aficionados of Korean cuisine to say that it’s not “authentic.” Baloney. When you have traditional recipes, it’s inevitable there will be national and international variations. These were very tasty wings, with Korean signifiers like gingery tamari sauce, garlic and sesame seeds. 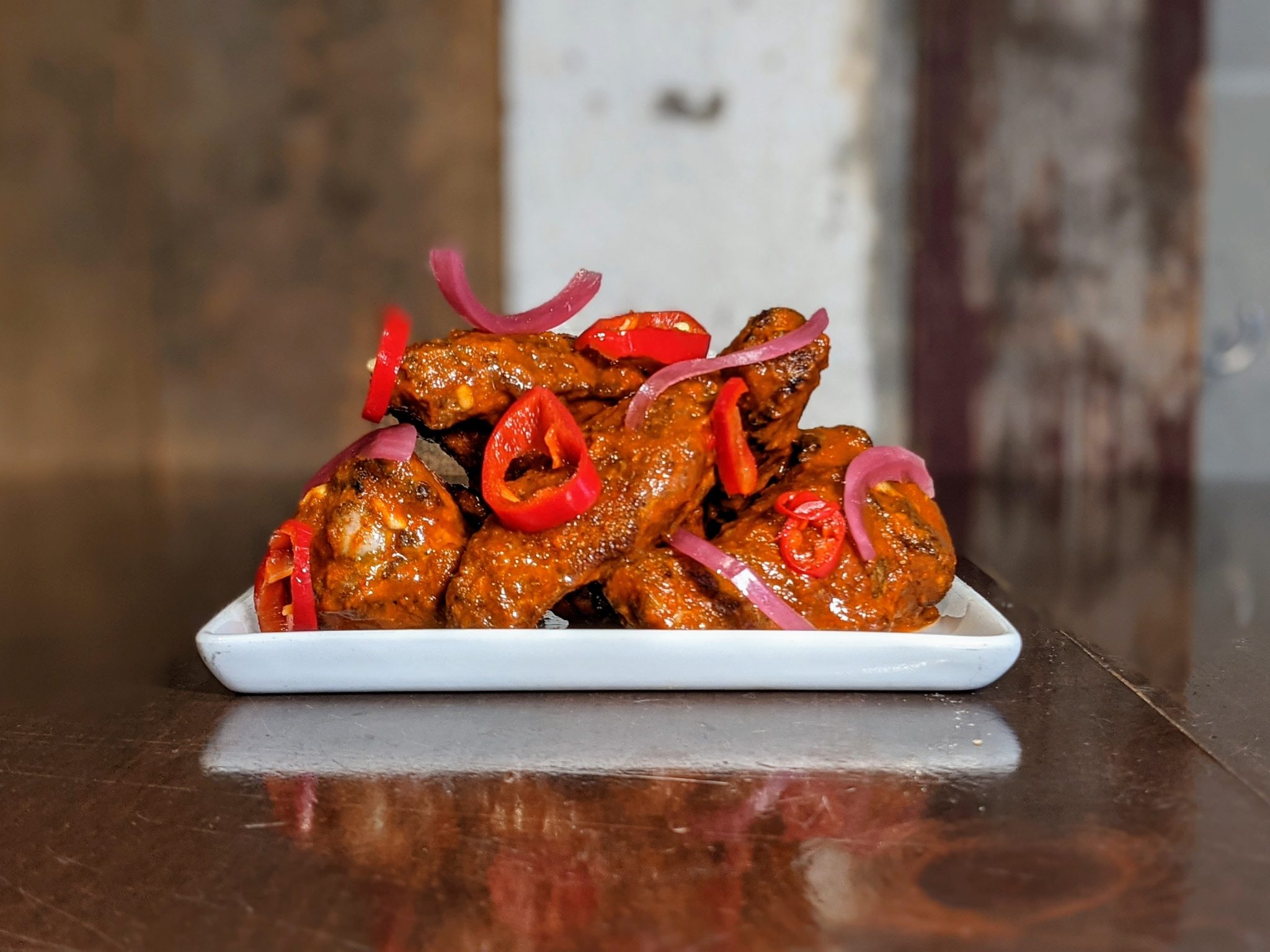 Peruvian “Aji Panca Pepper.” The Fresno peppers and pickled red onions make an order of these wings—McLean’s favorite—look more like a composed plate of food than the usual mess o’ wings. There’s a smoky chili citrus glaze, and as with other types of wings at Charred Wing Bar, the heat is dialed down on regular orders, although you can have the chef amp up the capsaicin quotient if you like, or simply add one of Charred Wing Bar’s more incendiary sauces. There is, McLean says, a “whole lot of flavor going on there.” He’s right; there is.

With all charred wing preparations, the sauces are crafted in-house, not purchased in a bottle, so again, the final product has a curated feel that you won’t find in other wing platters. “The viscosity of the sauce holds to the wing very well,” says Murch, “so when you take a bite, you get a taste of the moist, marinated chicken and the sauce.”

Considering that your main course is the “healthier-than-fried” charred wings, you will feel less guilt about Charred Wing Bar’s fried sides. The Tobacco Onions are exceptional, thin cut onion circles—think French’s, only way better—battered with a touch of cayenne and fried super-crisp. The French fries, though, are magnificent, with a thin fried “crust” and a moist, pillowy interior that spills out when you bite into the delicately fried potato. Though sometimes an automatic add-on that comes out of a frozen bag, the hand-cut French fries at Charred Wing Bar are about as good as they can be. Even if I just had lunch in the South Loop and was walking back to my car, if I walked by Burger/Charred Wing Bar, I’d be tempted to stop in for an order of these outstanding fries and maybe a beer, like their exclusive 1837, a red ale upon which McLean and Murch (unsurprisingly) put their own distinctive twist.

Of course, fried items do not hold up as well during the takeout and delivery process; “with a breaded and fried wing,” McLean has found, “once you put it in a container and seal it, five minutes later, it’s just terrible, it gets all mushy.” The grilled and charred wings reheat well at home, much better than a fried wing, which will never be as good as it was just out of the fryer.

Incidentally, don’t let the word “charred” throw you: these wings are lightly touched with tones of brown and black around the edges, but they’re not heavily carbonized, which is a good thing. These wings are treated with respect, which they’ve always deserved.