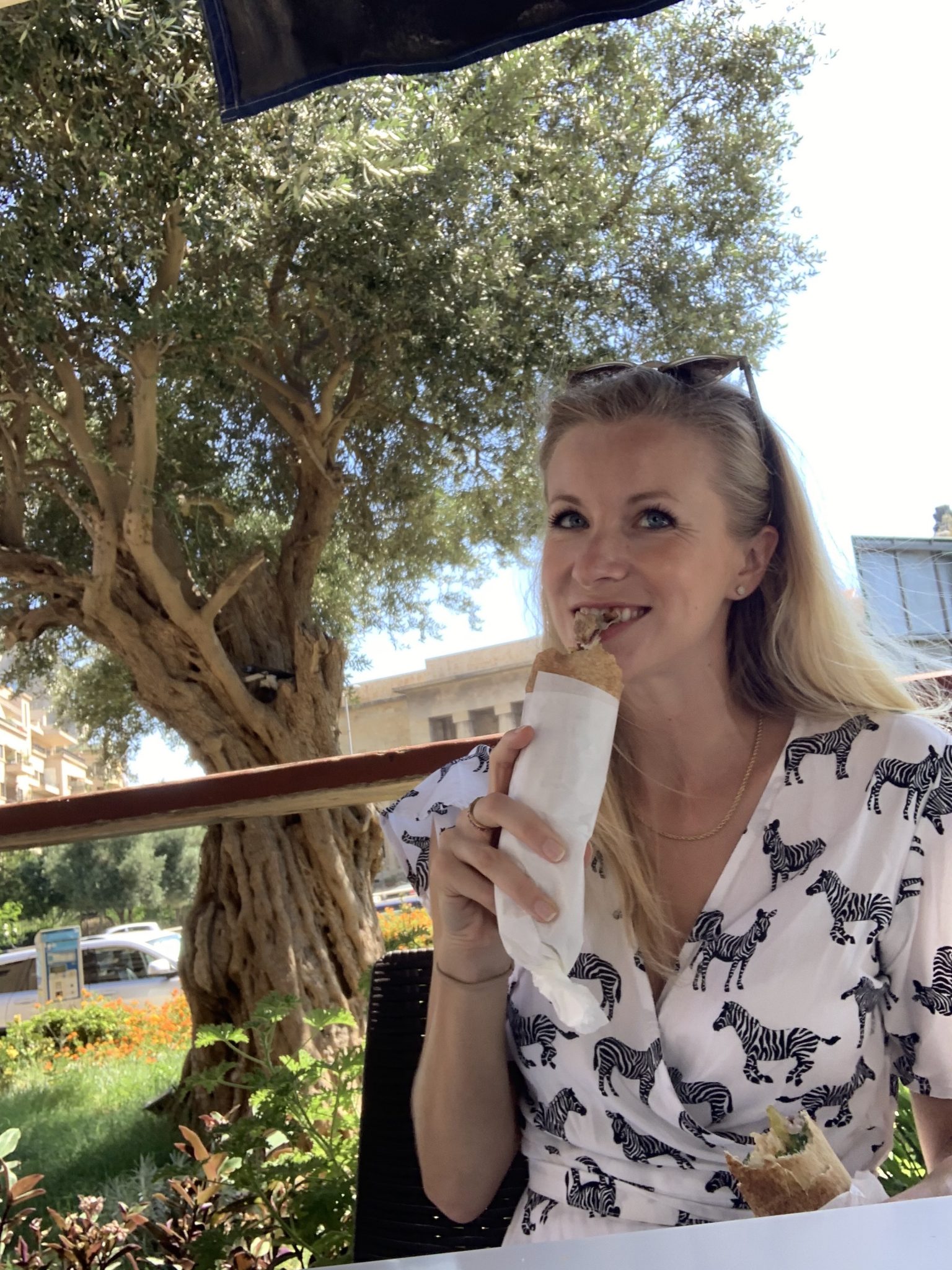 The first time I had shawarma I was twenty-one, studying abroad in Irbid, Jordan. Each day on the way home, my classmates and I would stop at the small shop on the corner where a man working quickly, expertly, shaved marinated chicken off a spit and wrapped it tightly in pita with a garlic sauce called toum, and pickled vegetables and shatta, a spicy red pepper sauce. At around $2, it was a staple in our day and something we missed dearly when we moved home.

The Ottomans first developed the method of grilling meat vertically on a spit in the nineteenth century, giving birth to döner kebab, shawarma, gyros and even al pastor tacos (Lebanese immigrants brought the cooking method to Mexico). While gyros and tacos veer from the original, döner and kebab are similar. The main differences are the spices and what people choose to put in the sandwiches.

For the past decade or so, I’ve been living between Chicago and other parts of the world, mostly different countries in the Middle East, eating all the shawarma I can get my hands on in Turkey, Jordan, Lebanon, Iraq, Egypt, Oman and the UAE. Sometimes the sandwich is grilled after it’s wrapped, then sliced into pieces perfect for dipping in extra toum. Sometimes it’s wrapped with French fries, or at trendy joints in Amman, melted cheese. It can be wrapped in a thin lavash bread or in a thicker pide, a Turkish flatbread. The marinating spices can include cinnamon, cloves, allspice, turmeric, coriander, cumin, sumac, cardamom and black pepper. Some veer sweet, toward baking spices, while others are more savory. Toppings vary, too. In Gaziantep, Turkey, the sandwiches include red cabbage, onions, sumac, and even toasted chickpeas. In Erbil, Iraq, shawarma is often served in samoon, a pillowy eye-shaped bread, and topped with a heap of pickled vegetables such as cauliflowers and peppers. Almost everywhere includes thin Middle Eastern pickles, which use smaller cucumbers than American pickles, and they’re less sweet, more sour and crunchier.

When I moved back to Chicago, I decided to attempt to try take-out from every shawarma joint in the city. Why not? We’re in the middle of a pandemic. I made a list of the places I knew, asked social media for recommendations, and scoured articles and Yelp for mentions of shawarma. My list now holds eighty-seven restaurants, but I’m sure I’m missing a few. I started in Lakeview, where I live, branching out a few miles in every direction. So far, I’ve tried twelve places. I should be further along, but a favorite popped up early so I’ve become a regular.

It’s hard to find a shawarma I don’t like, but there are elements that I consider make-or-break. The chicken must be well-marinated, thinly sliced and crispy. There should be more than a few extra-charred, fatty pieces in there. In the United States, shawarma often includes large chunks of chicken, nicely cooked but not thin or crispy. They taste good, but it’s not what you find in the Middle East, and it’s not the way I prefer the chicken to be served. Pickles are another must. Whether the crunchy and sour cucumbers or pickled turnips, parsnips or radishes, pickles are abundant in Middle Eastern cuisine. They’re not as popular here, for whatever reason, and it seems fewer make it into shawarma sandwiches. Toum, that thick garlic, oil and lemon sauce, is essential, as is shatta (although this is a divisive matter as not everyone loves spice). Each bread variety has merit and depending on where I am and my mood, my preference differs, but when I think of a classic shawarma, I’m thinking of a lavash tightly wrapped and grilled. It should also be noted that I’m talking chicken shawarma here. The original is lamb or beef, but chicken shawarma or döner is ubiquitous worldwide, and that’s what I typically order. 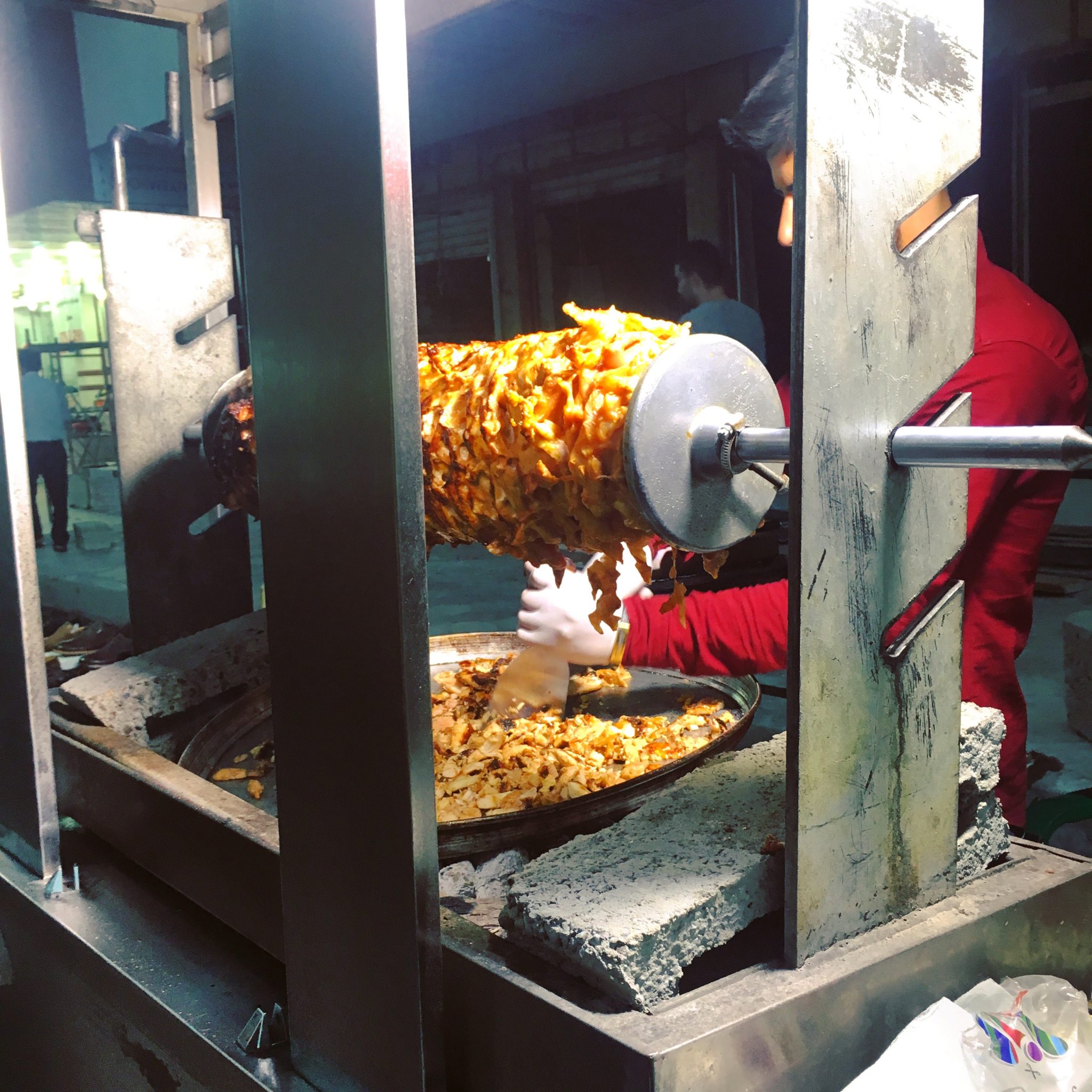 At Taste of Lebanon in Andersonville, the spices are on the sweet side and the sandwich is wrapped nice and tight. They use tahini instead of toum, with shatta on the side. I love this restaurant, and its lentil soup and falafel are some of the best, but I wish there were pickles in the shawarma. At Zam Zam Middle Eastern Grill, there are lots of pickles and purple cabbage, which adds a nice crunch. The marinade is a little spicy, a nice touch, but the chicken could be thinner. Worth noting: their fries are incredible.

I have a soft spot for Taza Cafe, on Devon, where they serve shawarma in samoon, the Iraqi bread that’s hard to come by in Chicago. The coating for the chicken is saucy and cinnamon-y, and the sandwich is stuffed with pickles, tomatoes and lettuce. Libanais, down the street, has some of the crispiest, most charred chicken of the restaurants I’ve tried. Their sandwich is lightly grilled and has excellent, tangy pickles. Cedar Palace makes a similar sandwich, another favorite, with some of the most thinly sliced chicken on my list, marinated evenly and with a good ratio of pickles and toum, plus onions, a welcome addition.

Shawarma Inn includes pickled carrots in its sandwich, which I liked, but unfortunately the chicken doesn’t seem freshly cut and came in large chunks. That said, I would eat the kibbeh Mosul every day. At Tiba Restaurant, the chicken also seemed pre-cooked, and was doused in so many spices it was almost grainy.

At Pita Inn, a Chicago favorite and home to my personal favorite falafel, the shawarma spices are on the savory side. The chicken is evenly coated in a yellow marinade and stuffed in a pita pocket. There’s no toum or any other sauce, and no pickles. Good chicken, but I found myself adding toppings and sauce at home. It does come with lettuce and tomatoes, like almost every sandwich on this list. Tomatoes are not a staple in shawarma across the Middle East, and in winter in the Midwest they’re generally bland and mushy, adding nothing to the sandwich.

Dawali Jerusalem Kitchen does not include tomatoes in their sandwich, or lettuce, a plus in my book. The chicken is lightly marinated and more on the cinnamon side, and could be crispier, but overall, this is an exceptionally good sandwich.

But I find myself ordering from Falafel and Grill over and over. The chicken is evenly marinated and a perfect mix between the sweet and savory spices. It’s sliced thin, with crispy, charred pieces in every bite. The toum is evenly spread, the pickles have a tangy bite and are bite-sized, which helps when eating, and the lavash is high-quality and lightly grilled. I order shatta on the side.

There are still so many shawarmas to try all over the city, and I know from experience, some of the best are out in Albany Park and Bridgeview. I’m planning to get to them all by the end of the year and would love to hear about your favorites and any recommendations that might not be on my list. Send me a message at @rebeccaleeholland on Instagram.