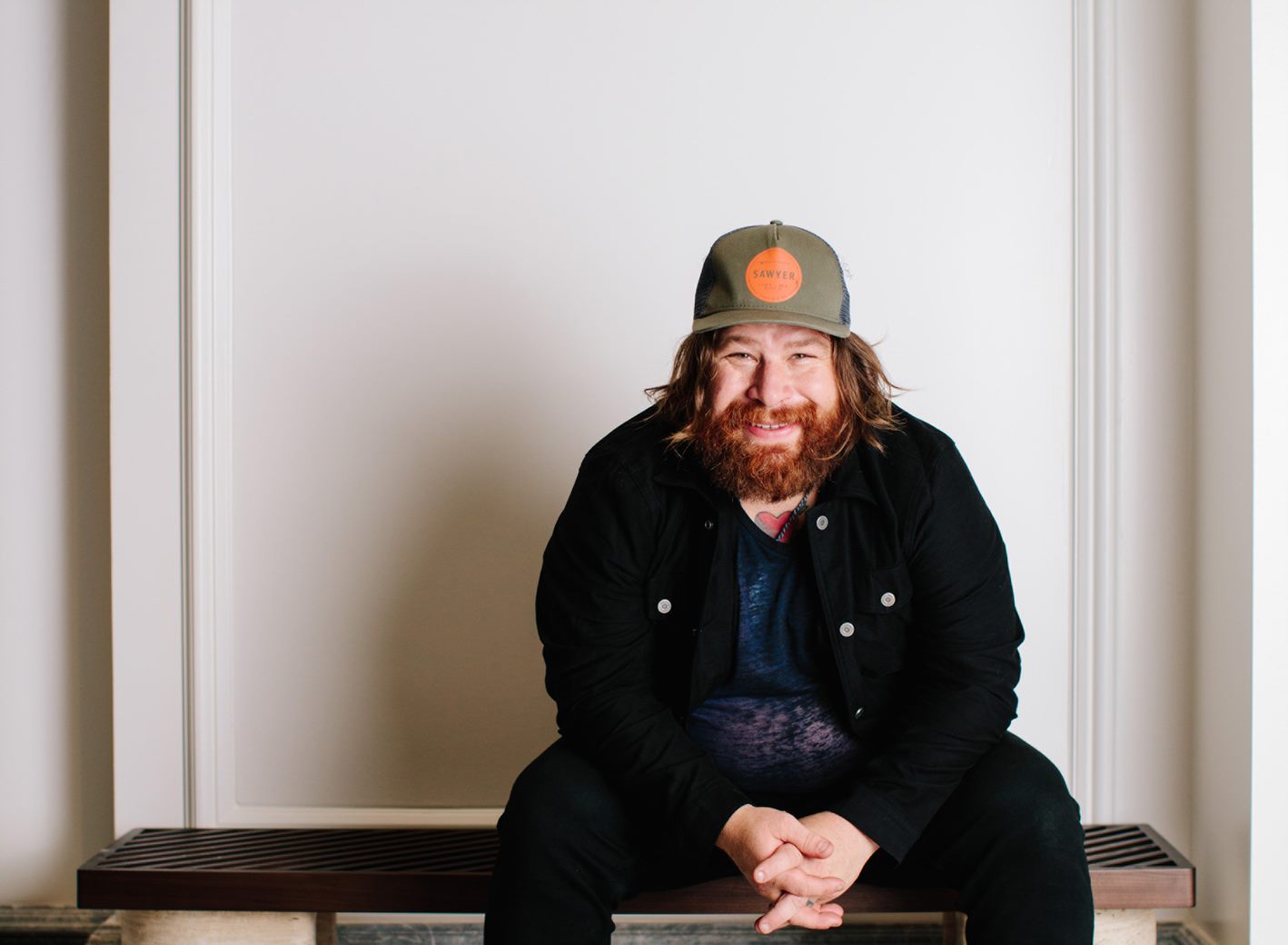 “Surprise and comfort are both parts of our ethos,” says Chef Jonathon Sawyer, of the reopened Adorn in Chicago’s Four Seasons, which launched in October 2020, only to be forced a few weeks later to close its doors.

Born in McHenry, Sawyer returns to Illinois from Cleveland, where he earned James Beard recognition as Best Chef Midwest, based on his work at Greenhouse Tavern.

You can spot Sawyer’s dual focus on his menu, with surprises popping up at the start of the menu and the comfort food-type options resting quietly in the entrée section.

During a recent dinner for local media at Adorn, we started with the bread and edible candle service. “This dish goes back to me being a nerd,” Sawyer says. “I was looking up the history of how the sandwich was invented, and some sources trace it back to poor people’s food, where you take two-or-three-day-old bread and soak it in warm water or warm fat. Mariners used to do something similar, when they’d burn their candles of whale, lamb or beef fat and they would dip their bread into all that warm fat. I thought it was amazing that no one had ever thought of edible candles, and I started buying candle-making supplies, like molds and wicks. Now we use unbleached butcher’s twine for the wicks. We render the fat from the meat trimmed in our kitchen—a combination of wagyu and grass-fed beef—then clarify it, put it in a ramekin and let it cool. After it’s served, it takes about eleven to seventeen minutes for the candle to melt onto the plate.”

If this sounds gimmicky, well, maybe so, but in the words of the late Homaro Cantu of Chicago’s groundbreaking Moto, “What’s wrong with gimmicks?” We go to restaurants for many reasons, and one of them is to be entertained, so if a surprising starter is set before us, cool, we’re into it. Of course, it must taste good, and we were delighted to dip Publican Quality Bread into the melting beef fat, luxurious and flavorful, made even more delicious with a sprinkling of coarse salt.

My father would recall the lard and bread sandwiches he ate while growing up in Hamtramck, Michigan. Sawyer tells us that when he was a kid, he was similarly inspired to use such “fifth quarter” meat products. “I grew up in a family of Eastern Europeans, with powerful matriarchs who gardened and didn’t throw anything away. I came from those early experiences with a love of simplicity, an appreciation for ingredients, and an understanding of hospitality, entertaining and feeding people in their homes.” 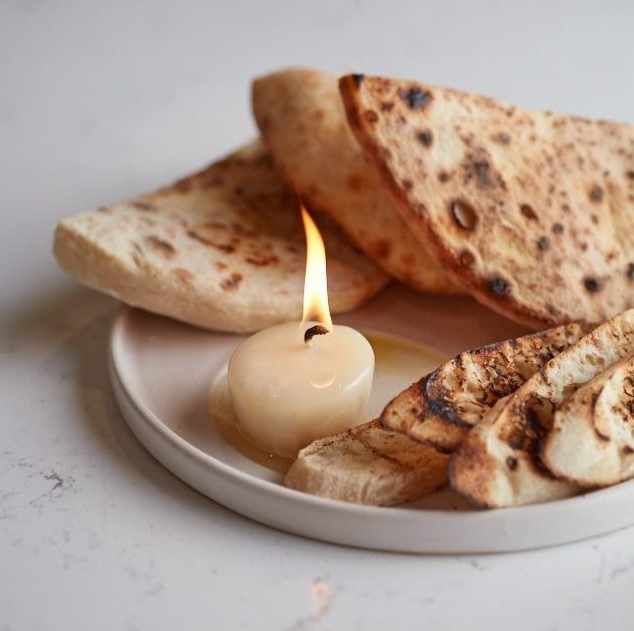 Sawyer digs deeper into his origin story: “When I was being born, it was a long labor, I was a big baby, and my dad left halfway through the labor to get a sandwich. All of a sudden, here I come! So, when he comes back, he grabbed me for the first time, and a dollop of mayonnaise fell from the sandwich and anointed my forehead. Anyway, that’s the family story.”

Because Sawyer was excellent at math, his dad wanted him to be an engineer, but Sawyer recalls that “I’d been cooking since I was thirteen, just to have a job, and I loved the energy and the immediacy of serving people and making people happy through food and conversation. So, I’m in my second year at the University of Dayton, I was working in a kitchen where we had a traditionally trained French chef—you know, pan-throwing, swearing, super-mean. He was a caricature of the chef you’d see in sitcoms. One day, I was making a vinaigrette, and he grabbed me by the arm and said, ‘You know Jon, you are not a bad cook,’ which was huge; it was the first compliment I’d ever heard him bestow on someone. I just said, ‘Yes, Chef,’ but inside I was smiling from ear-to-ear. I was already questioning my career choice as an engineer. It was so dreadfully boring. I didn’t think I could do forty years at a desk. That compliment from the chef came at just the right time to help me make up my mind. I dropped out of college and went to culinary school. Twenty-seven years now I’ve been in the kitchen, and I love being a chef.”

You can spot the influence of this early training under a tyrannical French chef—as well as Chef’s enduring playfulness–in such dishes as the Crispy Confit of Chicken Wings. “Wings prepared ‘our way,’” Sawyer says, “were revolutionary in that they combined the French bistro practice of duck confit with the Americana of the Buffalo wing. We get the wings in, we cure them in a mix of juniper, black pepper, balsamic, bell pepper, bay leaves, sugar and coriander. Curing seasons the chicken all the way through, and it loosens the skin a little. We let the chicken sit in that cure for twenty-four hours, and then we confit it at 180 degrees for six-ish hours. We pull the chicken out and let it air dry, so it forms a pellicle [a kind of cuticle over the skin]. When we drop it in the fryer, the fat crisps the skin, but it never penetrates the interior, so the meat stays tender and falls off the bone, like on a confit duck.” 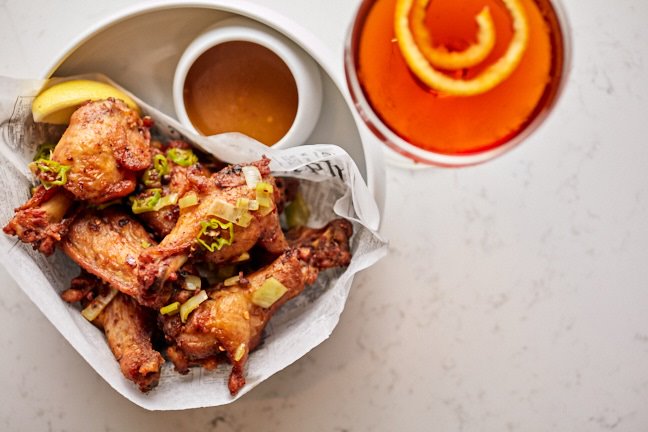 Biting into the skin of Sawyer’s chicken wings, the flavor explodes outward, released from beneath the pellicle to reveal soft, super-lush meat beneath. There’s a slightly hot chili sauce on the chicken, balanced with fresh crudités and umami-rich blue cheese.

As part of the hotel restaurant, Sawyer’s kitchen will be responsible for brunch and soon, breakfasts, where he has some fun planned. “During quarantine, my kids got into the food videos on TikTok, and they were bugging me to get onto it. I actually did find some inspiration there, and now we’re doing our take on the teeny tiny cereal craze. We make miniature laminated-dough croissants—finger-rolled—and then we glaze them in cinnamon sugar. We put about thirty-seven teeny-tiny croissants in a bowl of cereal. For milk, we make an in-house blend of oat milk and pea blossoms, so the milk comes out robin’s-egg blue.” 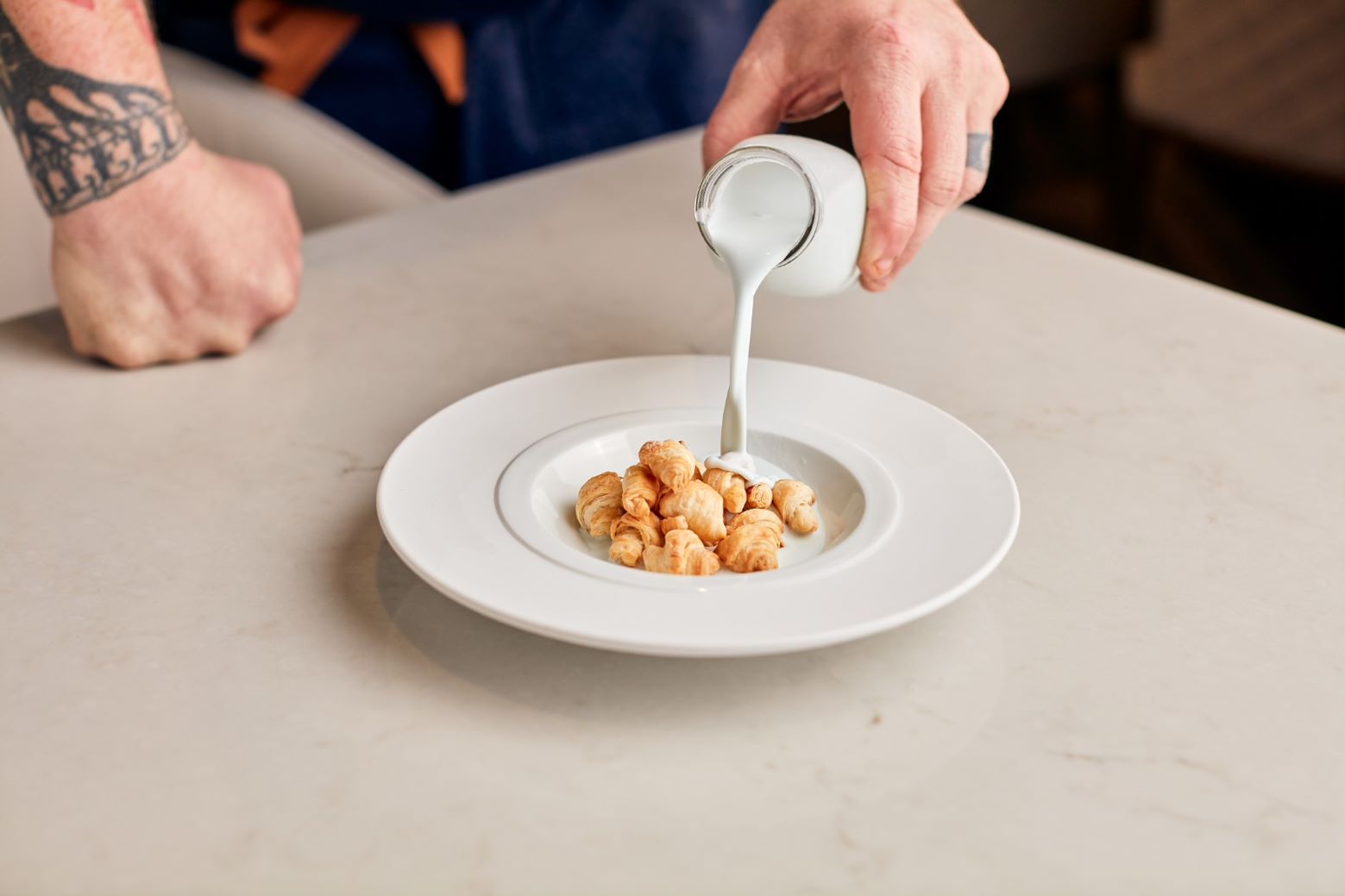 In addition to fun foods like the edible candle, confit chicken and teeny-tiny croissants, Sawyer’s menu has comforting standbys like a dry-aged prime beef burger and the “Lobster & Spaghetti “Joe Beef” Style,” which is a petite, powerfully flavorful portion of the crustacean and bucatini, with lardons, basil and cognac butter, just fantastic. We also enjoyed the Pickle Brine River Trout, with cauliflower, capers and gummy-bear raisins, a solid preparation of a well-sourced fish. Like many of Chicago’s best chefs, Sawyer procures his produce from local producers including Klug, Gunthorp and Victory Farms.

In these strange times, as we tentatively emerge from the darkened caves of our hibernation, you may tend toward the entertainment or comforting ends of the Adorn menu; or both, as we did; either way, it’s a good time.