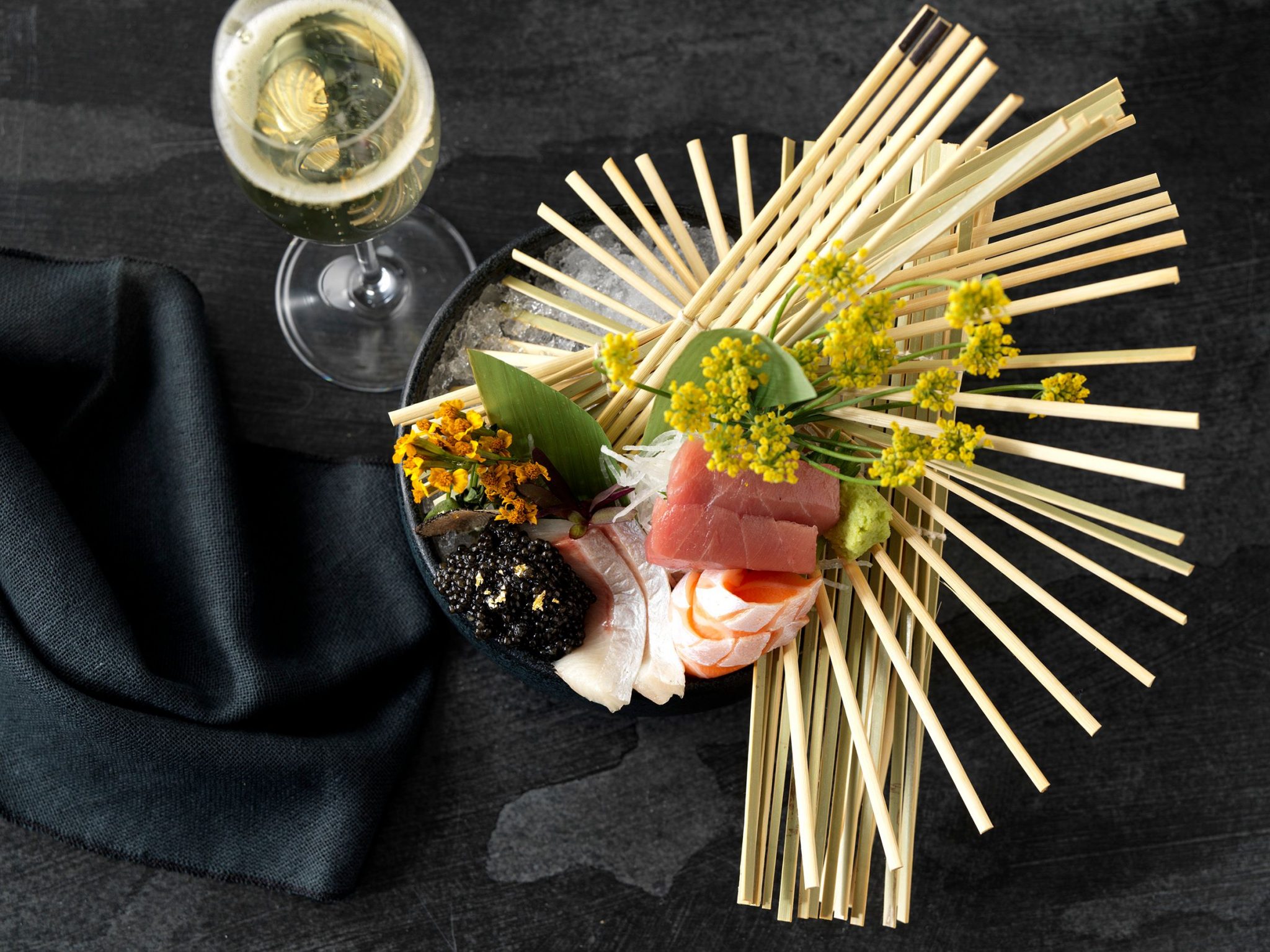 Five or six years ago, at a street market in Bangkok, we bought a container of what looked like clusters of green caviar but which were sea vegetables—we weren’t sure what the heck they were. I posted a photo of these mystery edibles on Facebook and asked if anyone knew what they might be. Rod Markus of Rare Tea Cellar cleared it up for us, almost immediately posting back that what we had there were sea grapes, and that he could source them from Okinawa, should we want them. As it was, these sea grapes, which the vendor at the market told us were “salad, just salad,” were the most expensive item we purchased that morning, coming in at about $3.50 for maybe four ounces. We very much enjoyed these sea grapes, which popped in the mouth to release a marine blast of salty deliciousness. We doubted we’d ever see them in Chicago, where the price would likely be much more than what we paid for them in Bangkok.

Sea grapes—provided by Markus and Rare Tea Cellar—are on the menu at Mansion on Rush, which opened May 15, and which we checked out at a media event a few days before. Chef Chris Traynor, formerly of PL8 in Barrington, told us that he’s going to introduce the sea grapes as a garnish, which is probably the right way to go: if people dig them on the side of the plate, they can get a whole order of them. 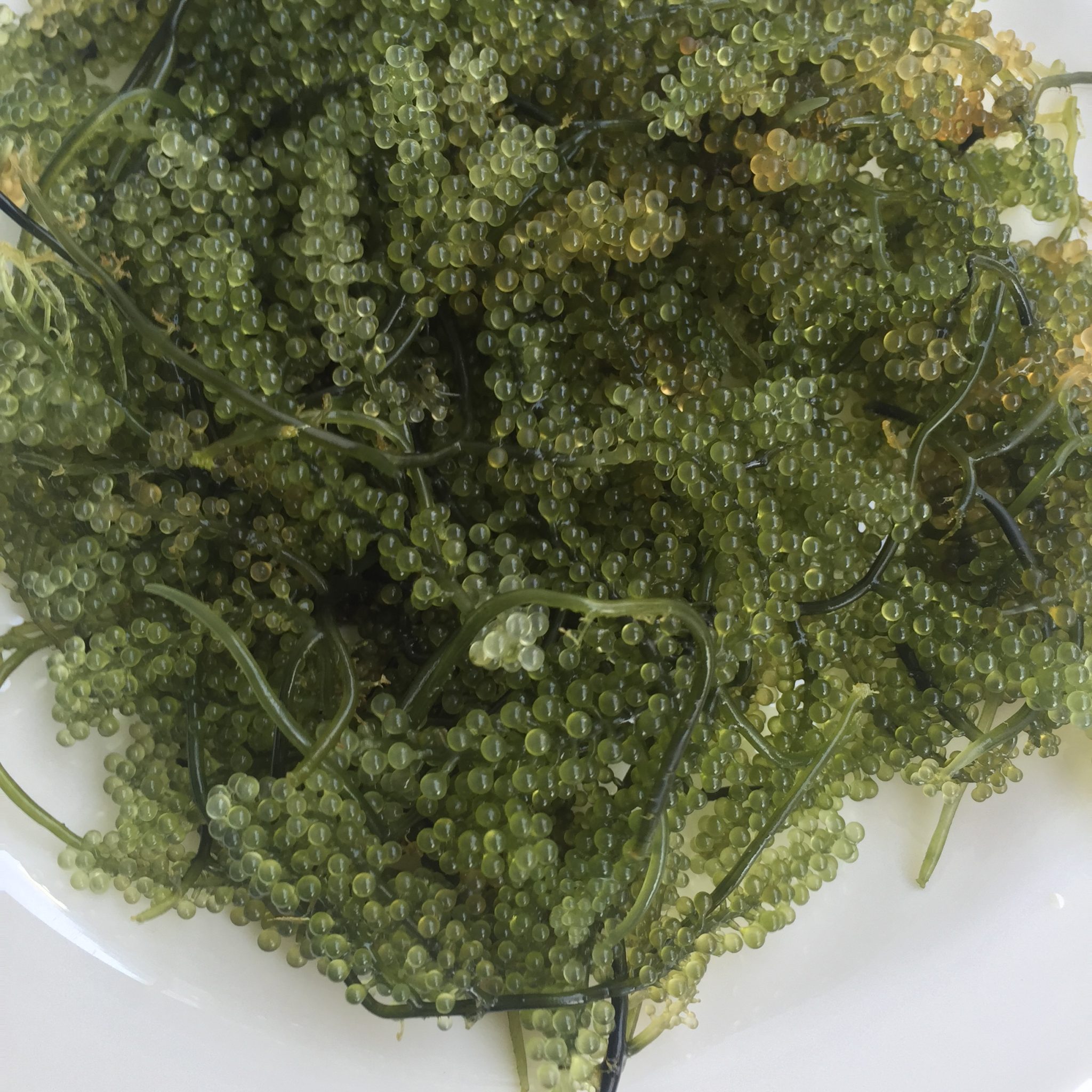 Mansion on Rush specializes in high-end menu items, and when the ingredients are rare, our preference is to keep things simple. Case in point: caviar. What sets Mansion on Rush apart from other high-end dining places on Chicago’s North Side is the large range of caviars and roes, including sturgeon caviars like Emperor’s Beluga Hybrid and Golden Osetra, and among the roes, Golden Rainbow Trout and Lake Superior Smoked Whitefish. To accompany all the fish eggs, Chef Traynor prepares several sauces, including crème fraiche, which is excellent, although when eating such costly foods, I prefer to go commando, with minimal accoutrements—just a slight dap of sauce, the better to savor the wonderfulness of the food.

“The concept as I developed it,” says owner Rodrigio Ferrari, “was to have a restaurant that served Japanese cuisine with a Latin influence,” and that dual focus is evident in the spicy kampachi. This is a relatively simple preparation of yellowfin on a chili salsa with smoked soy, ponzu pearls and micro cilantro. Though there was a little heat in the salsa and saltiness from the soy, the excellent flavor of the fish came through cleanly. We liked it so much, we ordered a second helping of the spicy kampachi for dessert. The chili salsa reflects the Latin influence of Chef Alberto Padilla, who came to the Mansion on Rush kitchen to work with Traynor after many years at La Scarola. 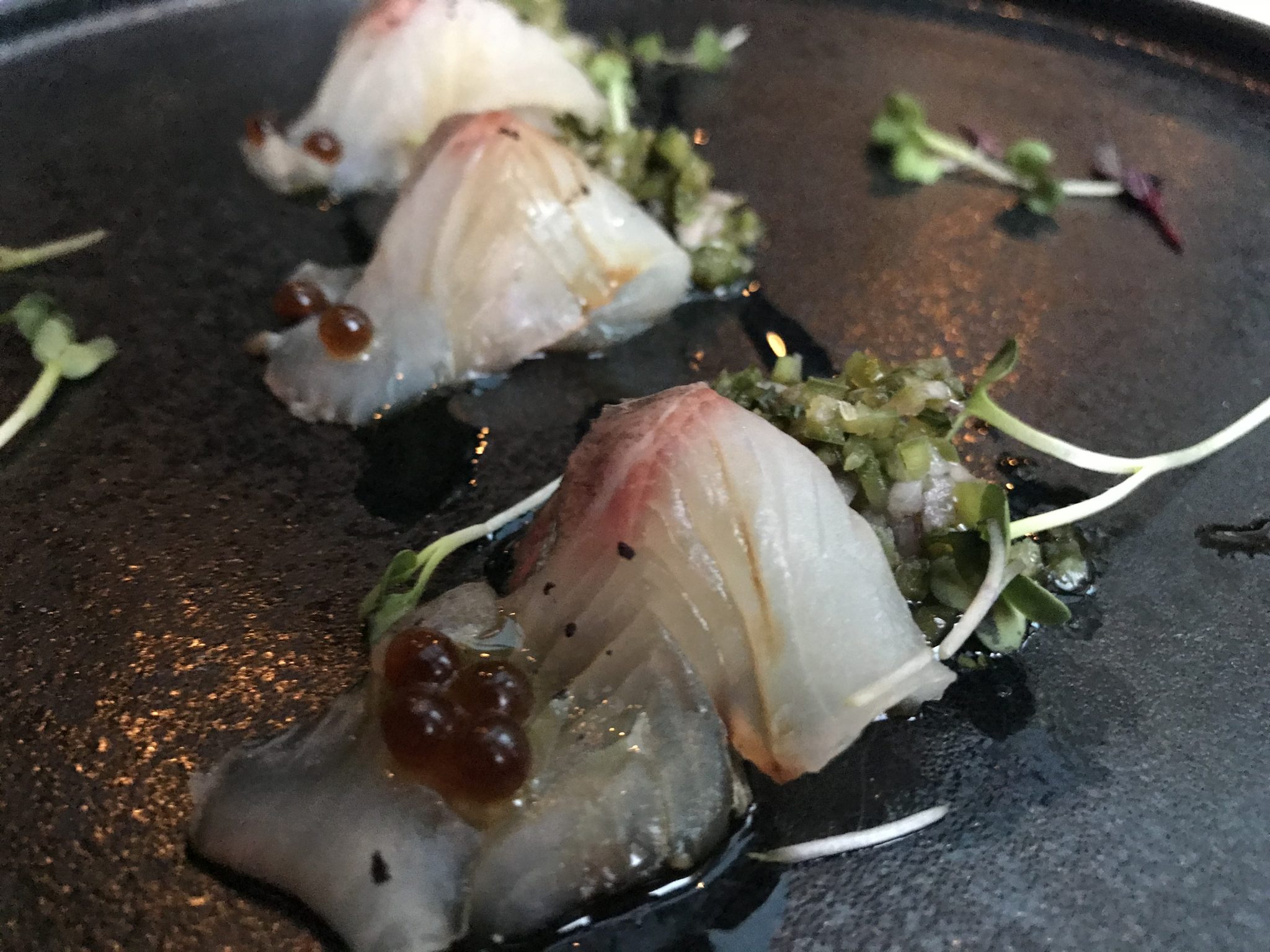 Traynor points to the octopus with roasted red pepper coulis and roasted tomatoes as one of the dishes most representative of the Japanese-Latin cuisine at Mansion on Rush. “It’s the first dish that Chef Padilla and I collaborated on, and it’s a combination of his octopus and my sauces, a good example of how we both came together to create something delicious and different.”

The pesto pasta presented scallops and shrimp in a basil pesto over squid ink noodles. I face a conceptual hurdle with squid ink, which I attribute to an early fascination with the 1954 movie version of Jules Verne’s “Twenty Thousand Leagues Under the Sea.” In a classic scene from that movie, the giant squid—larger than Captain Nemo’s Victorian submarine—shoots out its murky and sinister-looking ink, which gave me nightmares and which at that age I would never dream of eating. I still am a little hesitant around squid ink, but this pesto pasta was a fantastic preparation, and the deliciousness of the carefully sourced shrimps and scallops made this dish another hit at our table.

Every now and then I’m served something in a restaurant that makes me sit back and wonder, “What a great idea! Why didn’t I think of that?” Such dishes are usually amazingly simple and incorporate ingredients that are readily available in a home kitchen. Such a dish was the roasted avocado, just the fruit, scored, drizzled with truffle oil. The charring and warming of the avocado, which is so often served cold or at room temperature, gave the simple fruit a luxurious mouthfeel, and it has earned a place on our summer grill. I am sure that when we serve it, our guests will be surprised that avocado can be cooked, and that it’s so wonderful when it is. 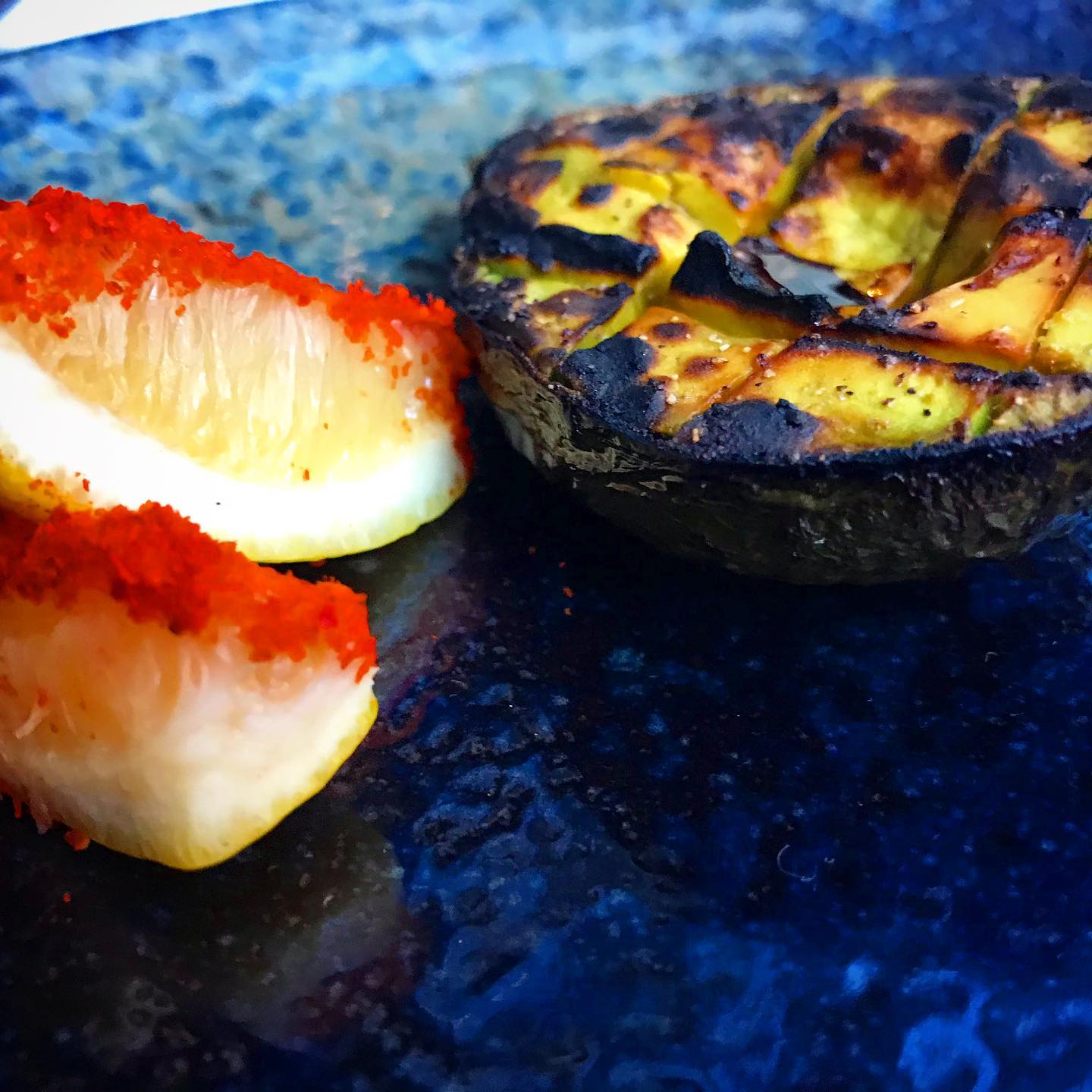 Ferrari has big plans for Mansion on Rush, which as the evening draws on will feature a DJ in a more club-like atmosphere. The kitchen will stay open until the early morning hours to fuel Rush Street revelers, and much of the food (like the spicy kampachi as well as several maki rolls) will furnish the bites appropriate to a party atmosphere.

Ferrari is understandably proud of the space he’s created, which like his restaurant’s dress code might be described as “polished casual,” with comfortable and stylish furnishings and an airiness provided by the enclosed patio, which Ferrari told us will soon have a retractable roof, making it a good place to chill on a summer evening. To create the right vibe, the menu makes it clear that Mansion on Rush’s “tailored experiences are not ideal for younger guests.” I would agree.

As the Chicago location of Mansion on Rush gets its final touches, Ferrari is looking ahead to this next location in Dubai, which is already in the works.