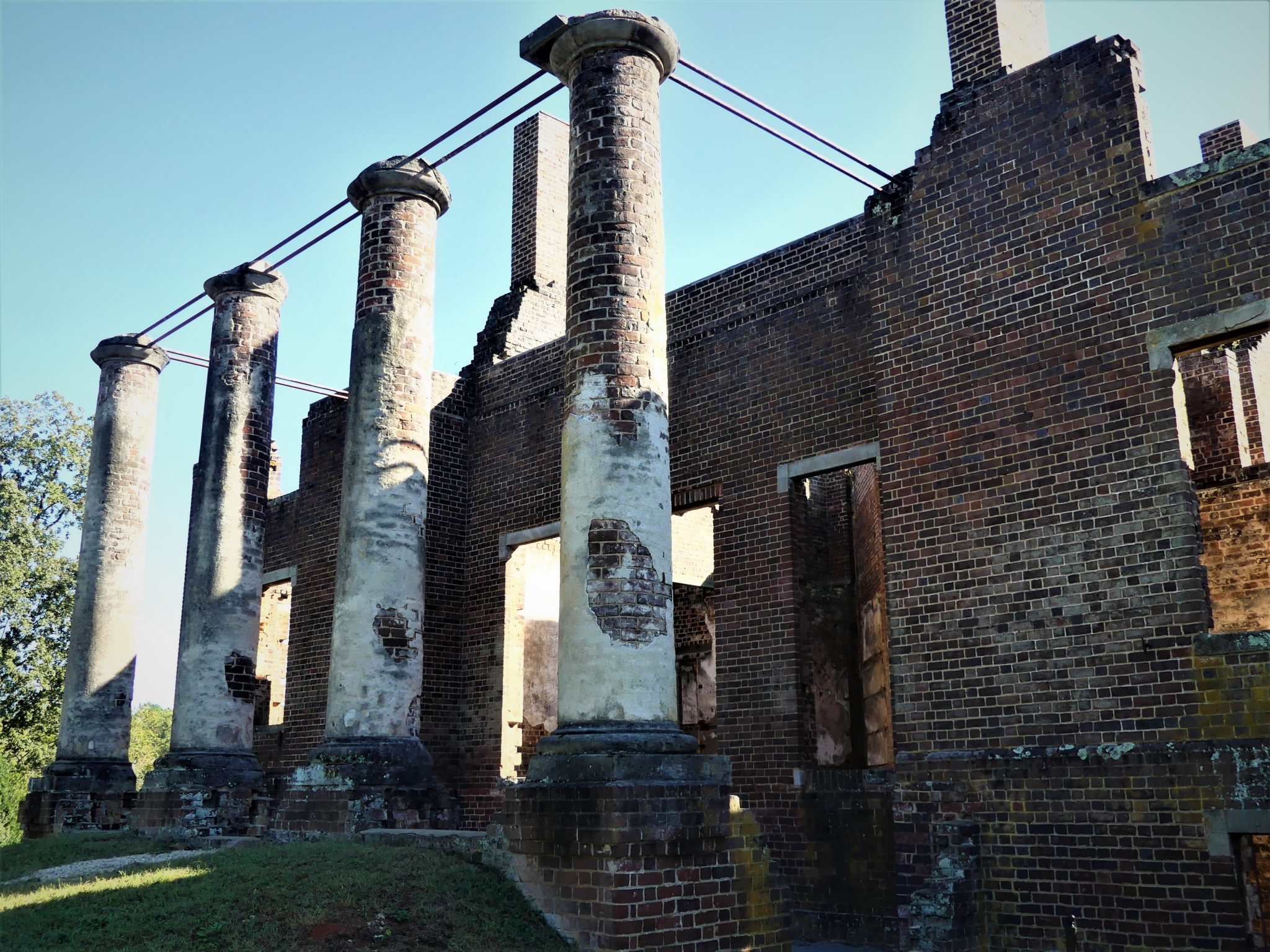 Before the pandemic, we had just visited Thomas Jefferson’s Monticello, where the third President had attempted, not always successfully, to grow grapes and produce wine. Jefferson had hired an Italian winemaker to help make his wine, and things were looking up right as the Revolutionary War intervened. After the war, Jefferson tried again to make good wine, but phylloxera, the native insect pest, killed many of his European vines.

As unsuccessful as he was as a winemaker, Jefferson did better as an architect, and in addition to his own Monticello, he designed a mansion for James Barbour, governor of the Commonwealth of Virginia. Barbour’s stately manse burned, although the outlines of the old building are still standing, and while they’re impressive, the main reason we visited Barboursville was for the wine.

Virginia has produced wine for centuries, and although the Commonwealth is in the top ten wine producers in the United States, the wines of Virginia account for less than one percent of the wine produced in this country; compare that to California, which produces over eighty percent of U.S. wine.

Although Virginia has a long way to go to approach California’s level of production, the fact that it is an “emerging” wine region means there are values out there. Napa wines are, notoriously, too damn expensive; wines from Virginia, which have yet to gain the cachet enjoyed by California wines, are still reasonably priced, and there are a lot of very good Virginia wines.

Last summer we tried a bottle of the Barboursville Winery’s Vermentino. It blew us away. This white wine is perfect for the warmer months; light, but with jaw-dropping dimension and minerality; it encourages contemplation and it’s so much more than a mindless summer quaff. Dry and crisp, it is excellent with crab and other seafood, and has an almost flowery nose, very pleasant on a warm summer night. Barboursville winemaker Luca Paschina tells me that “I used to drink Vermentino with my father when I was younger. The Vermentino grape is renown in Liguria for producing very fragrant and refreshing wine, and the grape favors a warm, hot climate, which is why I planted it here in Barboursville.” After one bottle, I immediately ordered a case from Wine.com, where shipping turned out to be free and cost per bottle came to only about $20, a particularly good price. It’s probably best, though, to order directly from the Barboursville Vineyards because, as with most food and drink delivery services, the maker of food or drink loses revenue if a third-party brings the goods to your door. 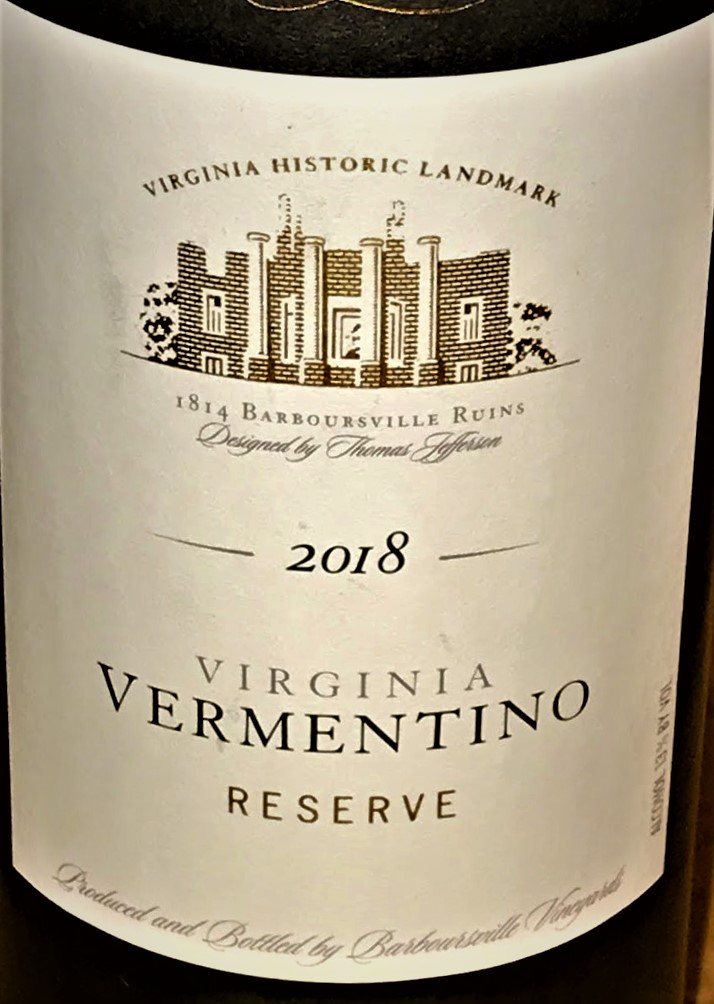 The 2016 Octagon is pleasantly soft, made mostly of Merlot (forty-six percent), along with Cabernet Franc (thirty-eight percent) and Petit Verdot (sixteen percent); all these grapes, Paschina tells us, do very well in Virginia’s clay-heavy soil. Octagon, named after the Jefferson-designed octagonal chamber in the Barbour mansion, shows a lot of vibrant red fruit, spice and tannins, which suggests a few years of aging will pay off—right now, says Paschina, “it’s a bit shy.” A bottle of Octagon comes in around $55, which is a reasonable price for a wine that gets a ninety rating from Robert Parker’s “Wine Advocate,” where the wine is described as “a beautiful expression of fruit and pungent aromatics. It also has a more rounded feel to it than some high-end Virginia wines. That’s not to say that there is no power—there is plenty. Still, a Barboursville trademark is the ability to seem complete and perfectly balanced while still aging well. All that said, this is hardly ready to drink; it does need a couple of years of cellaring to come into even better balance and show more expressive fruit. It should certainly do both.” We couldn’t wait; we enjoyed Octagon with a beautiful grilled ribeye, and it would pair well with much of what we eat during a summer barbecue. 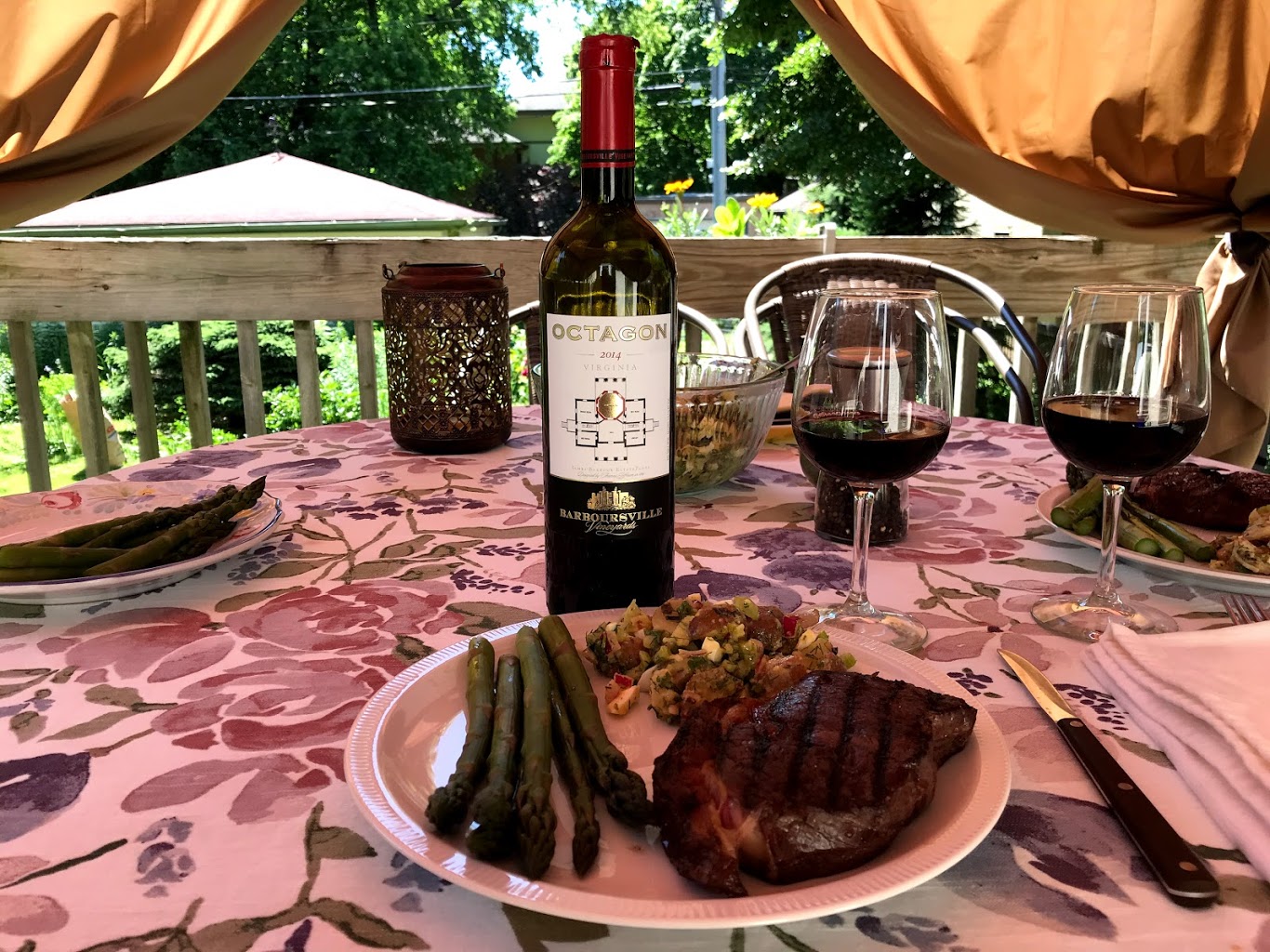 The big #1 winner of the Governor’s Cup was another Barboursville wine, the 2015 Paxxito. This is a dessert wine with eye-opening dimension: sweetness is just one element of the sip, and the sugars are well balanced with acidity, so the wine is not at all cloying. Paxxito is made through a traditional process of drying and raisinizing the grapes for a hundred days or more, while they continue to ripen and the sugars increase; when the sugar concentration reaches the desired level, 41 Brix, the raisins are crushed, rehydrated, fermented and then barreled for up to two years. Says Paschina, “The process of raisinizing concentrates the flavors in a grape cluster by four times,” which may account for the levels of flavor in a glass of Paxxito. The result is a perfect wine for starters like pate or a chocolatey dessert; at $60, this is also an exceptionally good price for such an excellent wine. For warm-weather sipping, we mix the Paxxito with a light spritz of seltzer.

Just as Jefferson brought over an Italian winemaker to help him at Monticello, the Barboursville Vineyards brought over Paschina from Torino to help coax the best wine from grapes grown in Virginia. For the Paxxito, Paschina told us he has racks of grapes drying out: “we find it better to let the grapes dry naturally, not because naturally is necessarily better, but because letting the grapes dry slowly has historically proven to be a good methodology, and it gets us the results we want. Those aromas in the grapes, you could not release them if they were dehydrated too quickly. As with the Parmigiano Reggiano cheese, it takes months for the cheeses to release water, for the flavors to concentrate, and for the cheese to become so intense and beautiful.”

Wines from Barboursville Vineyard can be found around Chicago at many restaurants and wine stores, including Roka Akor, Shaw’s Crab House, and newly minted Michelin two-star, Ever. You can also pick up bottles to go from House of Glunz (Chicago’s only nineteenth-century liquor store, deserves a visit). This year, we ordered another case of Barboursville Vermentino, direct from the vineyard, and it was about the same price as we paid through Wine.com… but the vineyard gets more of a cut, which it most certainly deserves.