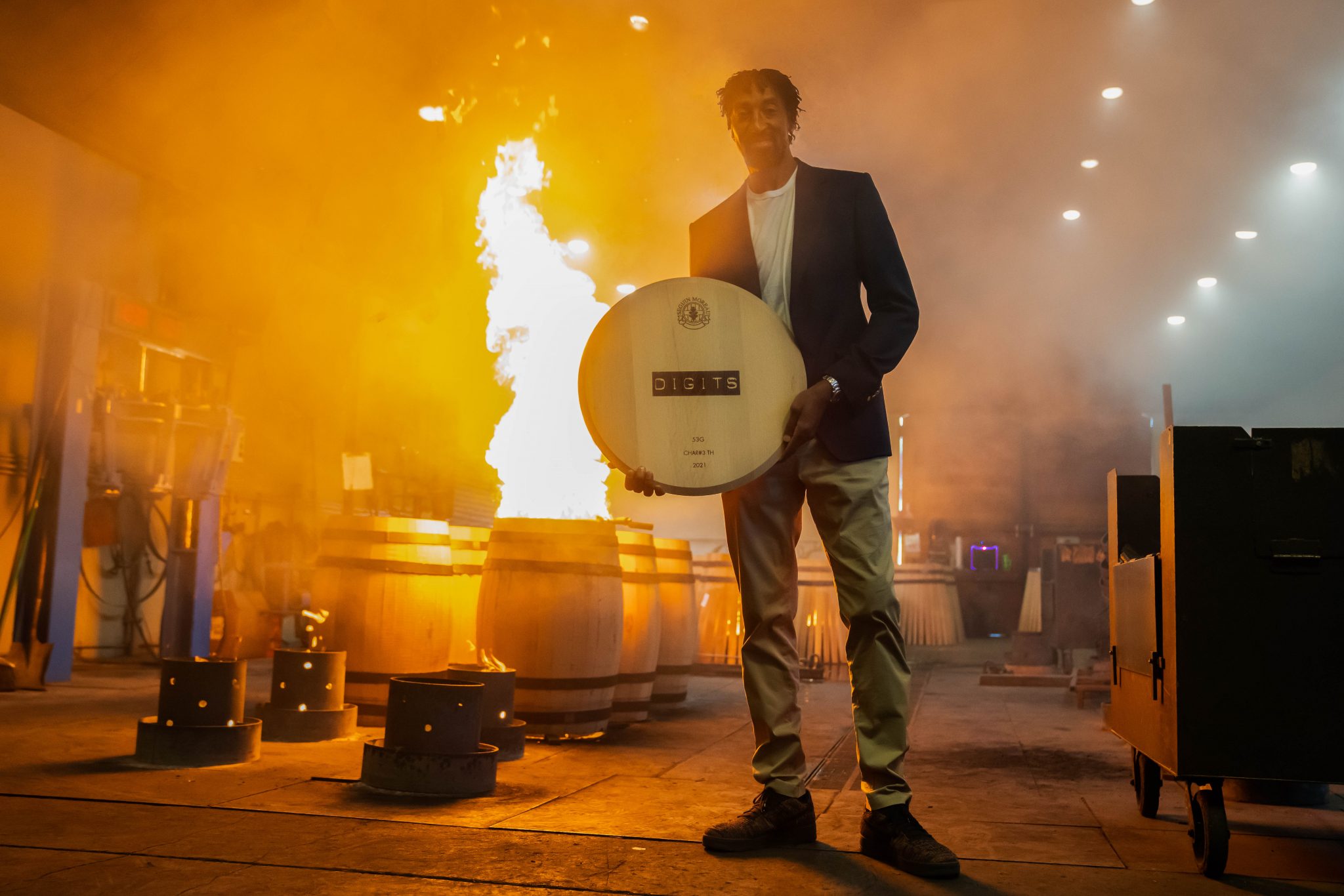 Scottie Pippen and the charring of the barrels/Photo: Margaret Pattillo

June 24 is the official launch of Scottie Pippen’s Digits, a bourbon from the man who helped win six NBA championships with the Chicago Bulls and who now joins the club of celebrities who’ve become spirits makers, like George Clooney (tequila), Jay-Z (Cognac), and Ryan Reynolds (gin).

Pippen was in Chicago earlier this week to lead a special bourbon tasting with friends, family and members of the spirits industry at The Clayton hotel. We weren’t invited, but we caught up with Pippen afterwards. We wondered whether he enjoyed any other brown spirits that might have served as models for his bourbon. “Well, during the pandemic,” Pippen says, “I drank a lot of Whistle Pig,” a rye whiskey known for being a smooth sip. Digits is all about the smooth.

But why launch exclusively in Chicago?

“Chicago is the town,” Pippen says, “where everything got off the ground for me. So, it just made sense to start here. Chicago is a great city, and there’s no other place like it. This is my stomping ground. It’s special to me, so it made sense for me to start here, where there are so many people who’ve been behind me for years, and there seems to be no other place on earth that has so many great bars and restaurants.”

Digits gets more than just an endorsement from Pippen because it’s his spirit, and he took a hands-on approach to its creation. “I sat down with Dave Phinney,” the Napa Valley winemaker and owner of Savage & Cooke Distillery, “and he brought me different bourbons to taste. I picked a few that I liked a lot and that’s what we went for with Digits. I was looking for a bourbon that would be easy for men—and women!—to drink. I didn’t want anything that was too strong or that gave you the burning sensation that people find with some bourbons. I wanted something that was smooth and soft, with an easy flow.” 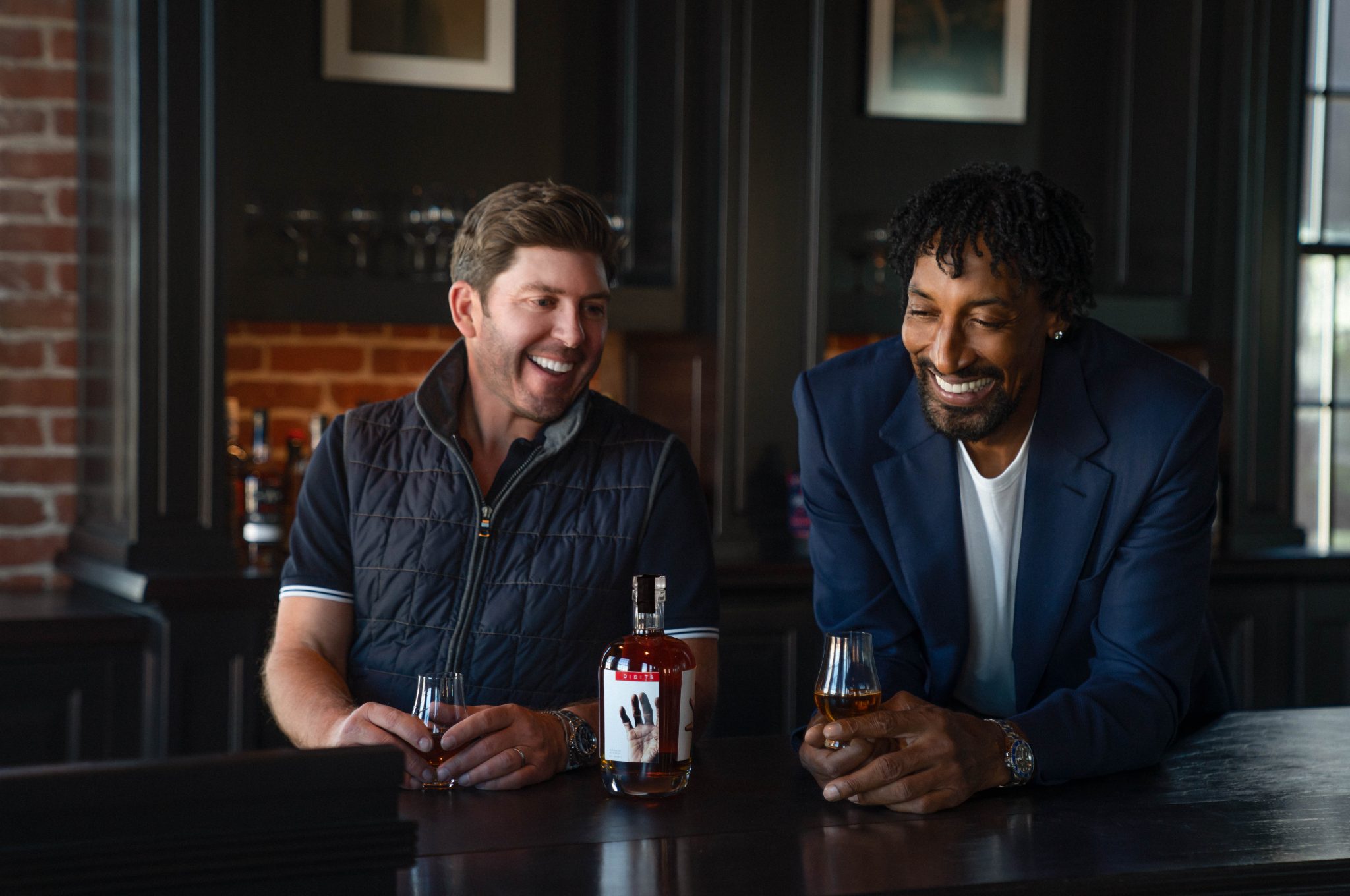 Although Digits is undeniably gentle on the palate, it has flavor notes that Pippen identifies as “cinnamon, nutmeg, black and white pepper and vanilla. Overall, it’s smooth.”

When it comes to making a bourbon, you can’t just decide to make a bourbon today, start distilling and then have a bourbon ready to go to market in anything less than two years. With vodka, for instance, you can make it today and drink it tomorrow; with bourbon, you must age it. Whiskey brands frequently use spirits that have already been barrel-aged and are ready, or almost ready, to be blended, bottled and called a bourbon. The Federal Standards of Identity for Distilled Spirits specify that for a spirit to be called bourbon, it must meet certain specific criteria. For instance, bourbon must contain at least fifty-one percent corn, be stored in new charred barrels, and then aged for at least two years. The bourbons that were blended to create Digits had been aged for at least five years, which means they used some bourbons that had been soaking up the good wood flavors and getting ever more mellow—and smooth—since the time Obama was president.

Pippen’s hands are all over Digits, even graphically. He worked to develop the flavors he wanted in this bourbon, and he also helps bottle the spirit, going so far as to help put labels on the bottles— making sure they’re straight—before they go out the door. “This is not just a celebrity endorsement for me,” says Pippen. “It’s my brand. I’ve created something that is a part of me.”

Images of Pippin’s famously dexterous hands are also pictured on four sides of the bottle, looking almost abstract against a white background, which should make the bottle stand out on the back of bars or on liquor store shelves. “Dave Phinney is my extremely creative partner,” says Pippen, “and I was sitting across the table from him when he looked up at me and said, ‘Wow, you have some amazing hands.’ So, we decided to use my ‘amazing hands’ as the artwork on the bottle.” 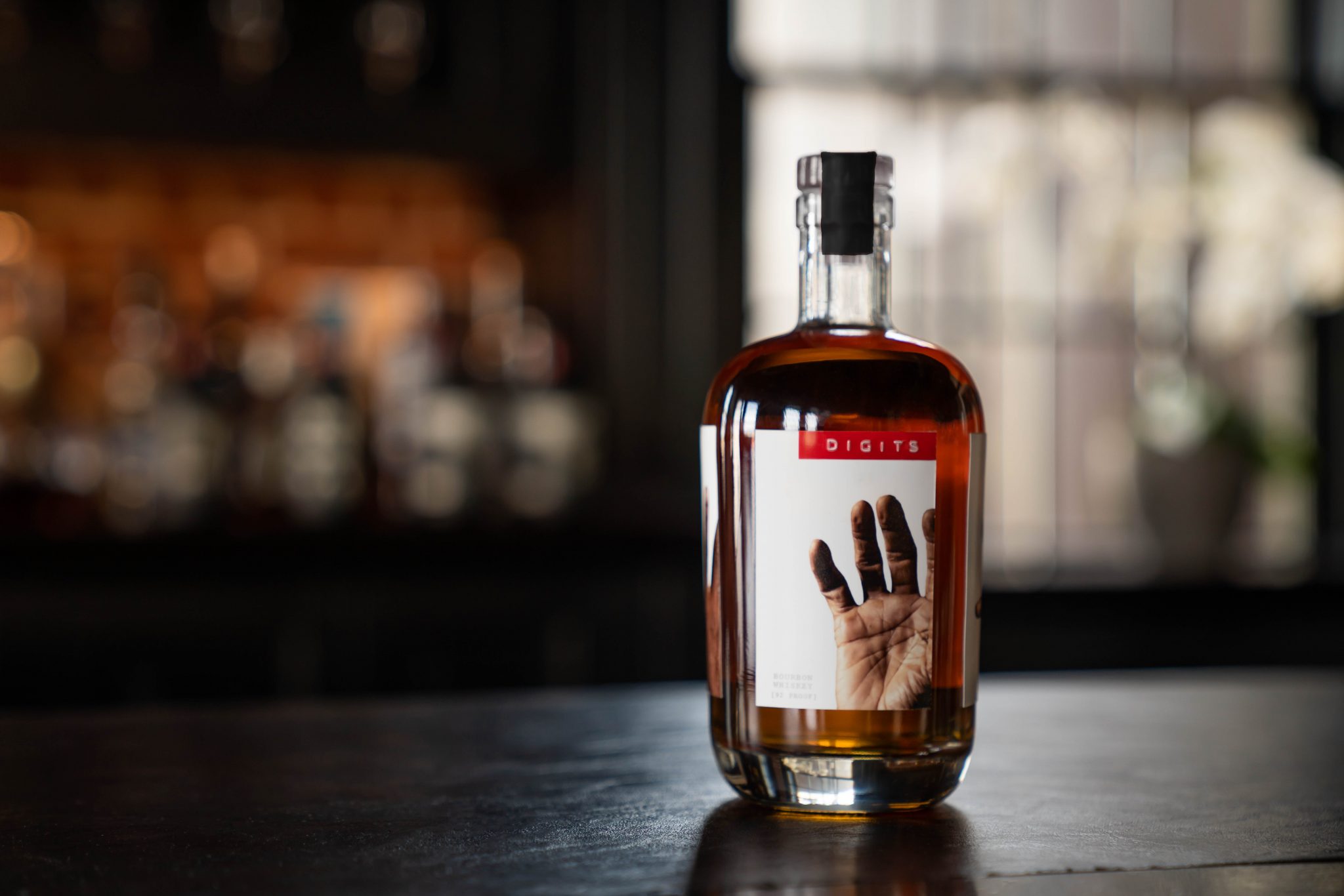 Digits is certainly an easy-drinking bourbon; not at all aggressive or burning, enjoyable on ice or in a cocktail. Though Pippen seems to take his bourbon mostly straight or over ice, he says he does enjoy a mixed drink: “If I have friends over, I first serve it straight so they can get a taste of the bourbon. And if I have plenty of the bourbon, then I like it in a mixed drink, like a whiskey sour with lemon juice and egg white.”

Starting with just a straight sip is probably a good way to go, and that’s how I introduced myself to Digits: first in a glass with just a little water to release the flavors, then in a cocktail. We used Digits in a Manhattan, where it took its place alongside the vermouth and bitters, assisting but not dominating or forcing its way to the foreground, a good team player.

Digits is currently available at Jewel-Osco, Mariano’s and Binny’s, and retails for $69.99. If you’re a fan of Pippen, you’ll also want to know that he’s got a “superfood popcorn” coming out soon, and a biography, “Unguarded,” due out later this year.