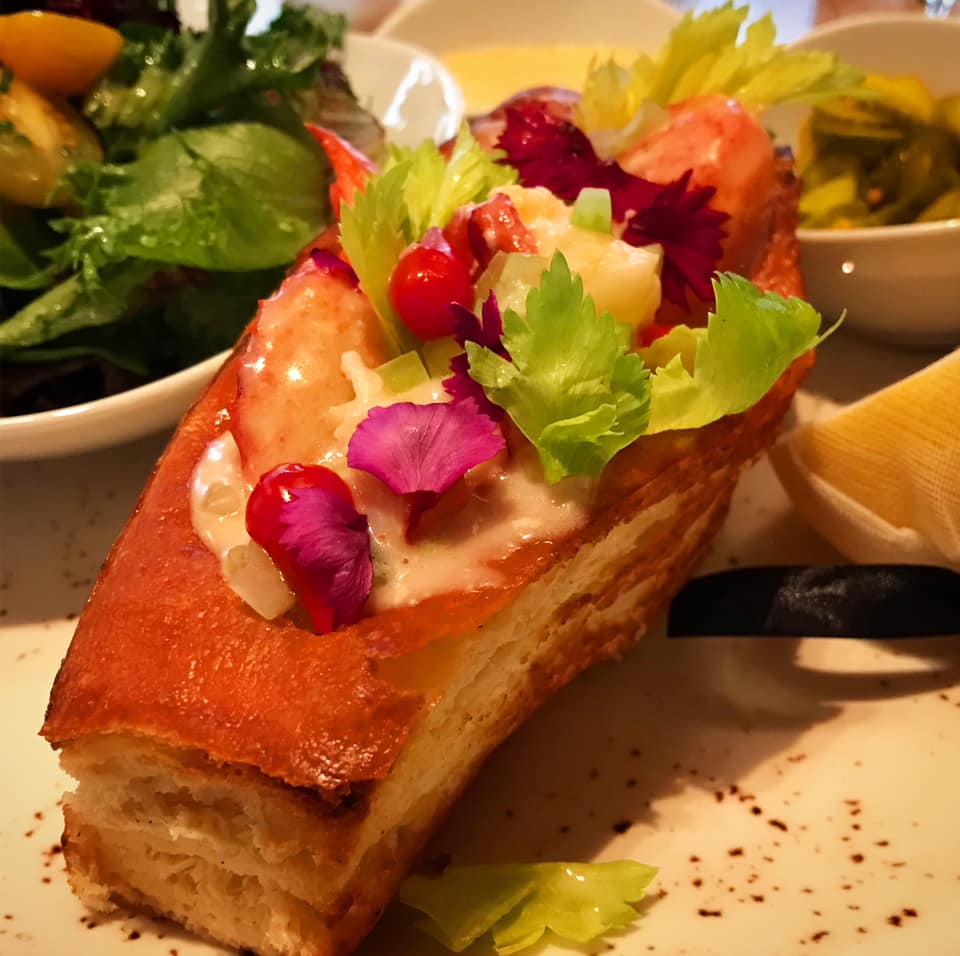 A lobster roll is usually precisely equal to the sum of its parts, those parts being a roll, lobster and mayo or some other creamy condiment. I like rolls, lobster and mayo, so putting them together is just fine with me, but I’ve always had the feeling that the lobster roll was a low-effort production, a dish with unrealized potential, good stuff thrown together to make an okay dish. It could be so much better.

Tracing the origins of the lobster roll is not nearly as challenging as tracing the origins of, say, the Chicago Italian beef sandwich or the Chicago hot dog. Many sources, from Wikipedia to the prestigious Encyclopedia of American Food and Drink, concur on where, when, by and for whom the lobster roll was first invented. According to the encyclopedia, the lobster roll “may well have originated at a restaurant named Perry’s in Milford [Connecticut], where owner Harry Perry concocted it for a regular customer named Ted Hales sometime in the 1920s. Furthermore, Perry’s was said to have a sign from 1927 to 1977 reading, `Home of the Famous Lobster Roll.’”

The first time I enjoyed a fine-dining lobster roll, we were having bar snacks at Acadia, Ryan McCaskey’s currently closed Michelin two-star restaurant in the South Loop. At that time, McCaskey told us he was shipping in his lobster rolls from his home state of Maine, and, of course, the lobster was served chilled, not warmed. It’s possible that during our earlier visit to Acadia, chef Qi Ai [Cee-Aye] was in McCaskey’s kitchen, fine tuning the chef skills she’d picked up at Kendall College. Before arriving in Chicago for culinary school, Qi, born in China, received her Chinese Language and Literature degree from Peking University. In addition to working at Acadia, Qi spent time at Boka and the now-closed Sixteen. In 2015, she was a National Finalist of San Pellegrino’s “Almost Famous Chef” Competition.

Now at Travelle at the Langham, Qi presides over the open kitchen in the dining room, and it was in that dining room that I was served the prettiest lobster roll ever.

Travelle’s lobster roll was, indeed, split down the top, and it was plated at an angle, rising to rest on the lip of a bowl of sweet pickles, the better to show off its colorful ingredients. The roll itself was beautifully browned, and it was possible to make out the delicate, flaky laminations of the roll, something you don’t expect to see in commodity lobster rolls. The usually uniform beige of the creamy sauce was studded with tiny edible flower petals, giving the otherwise neutral appearance of the creamy lobster little bursts of brilliant color. “We have a farmer come by every week to drop off flowers,” Qi says, “and we always pick the ones that are the closest match to the color of the lobster.”

Adding to the sandwich’s attractive appearance are tear-shaped red peppers, and, in a nod to tradition, a few celery leaves are positioned around the edges, adding color and a little bitterness.

Of course, appearances aren’t everything—not nearly!—and it doesn’t matter how pretty the food is if it fails to please the palate. This lobster roll did please, and a critical difference between Travelle’s lobster roll and the traditional model is that Qi uses a brown-butter hollandaise, which adds sweetness to the mix that matches the sweetness of the milk bread roll (for the record, it seems that Perry’s, the place the lobster roll was allegedly invented, uses a hamburger bun for its lobster roll: again, low effort). “We make the bread in-house,” Qi tells us, with an understandable touch of pride, “and there’s a whole lobster in there.”

Also contributing to the flavor dimensions of the lobster roll is, as Qi describes it, “a brunoise of vegetables, to add crunch and freshness to the sandwich, and a little dill, which goes well with lobster.”

The lobster itself was excellent. “We bring them in alive from Maine,” Qi tells us. “Many places where I’ve had the lobster roll use frozen lobsters, but we steam fresh ones to preserve the flavor inside the lobster [shell].” 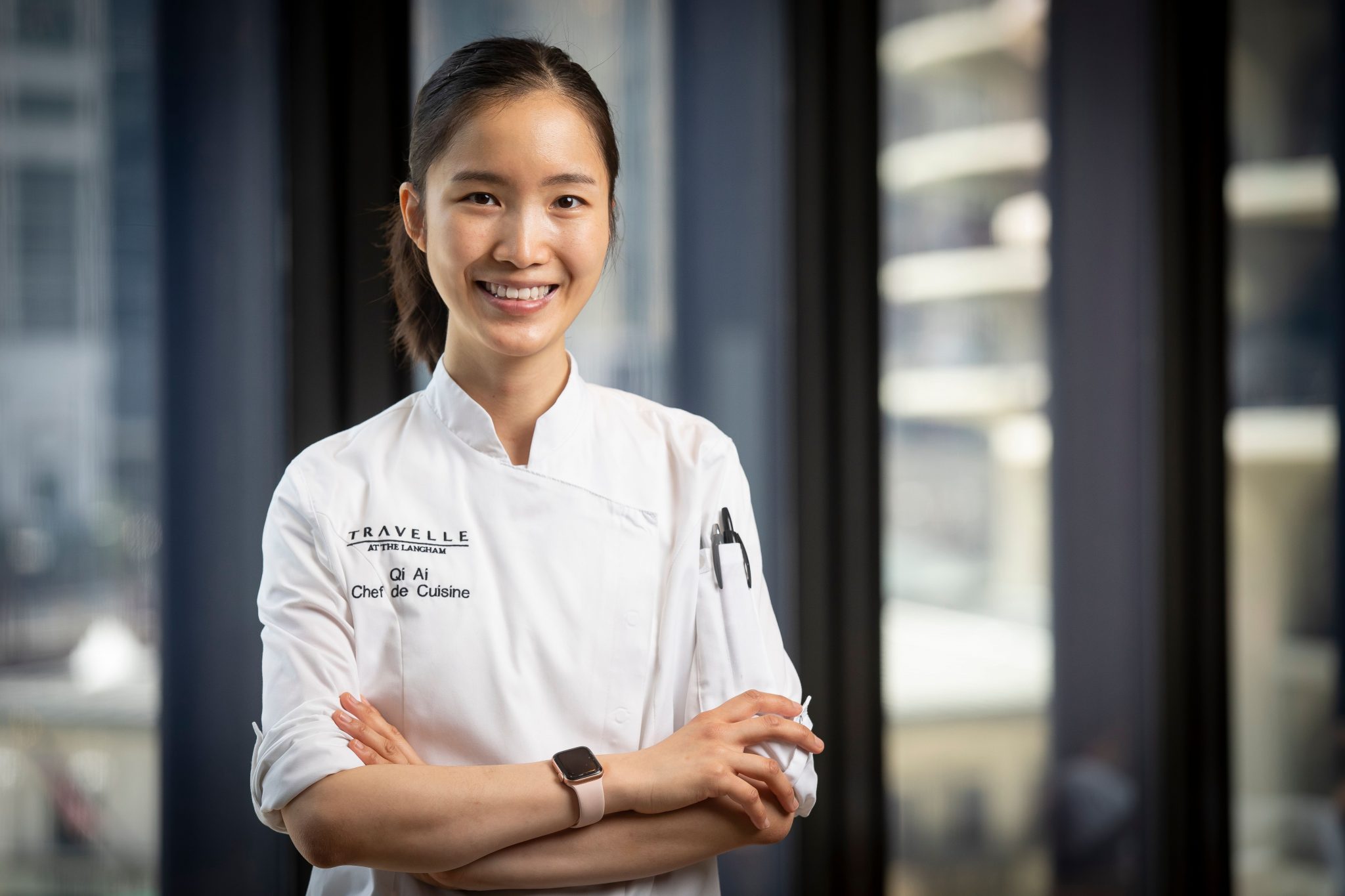 Qi Ai/Photo: Travelle at the Langham

There’s a reason why mayo is the sauce of choice for most lobster rolls. Lobsters were, until relatively recently, not fancy food, and many of us have heard the stories about how laws had to be passed to forbid feeding convicts and enslaved peoples too much of the stuff: a steady diet of lobster was deemed intolerably inhumane. Now, of course, lobster is paradigmatic fancy food, so rather than slathering on the out-of-the-jar mayo, it seems right to dress this sandwich in a high-toned sauce, like the brown-butter hollandaise.

This special treatment for the lobster roll is in line with Qi’s approach, which she describes on Travelle’s website: “When I create a new dish, I try to look at the timeless, classical dishes and flavor pairings, then work with seasonality and gorgeous presentation while showcasing intriguing flavors and unique textures.”

In places along the Eastern Seaboard, where lobsters are plentiful, they are considered more commonplace, and  receive a more commonplace preparation. Here in the Midwest, lobsters are luxury items, and rising in price (as with lumber prices, blame it on the pandemic), so perhaps they deserve more respectful treatment.

Of course, a fancy-pants version of what was once a humble sandwich is going to command a hefty price. At Perry’s in Connecticut, the lobster roll is a little over $16, and at Travelle, it’s more than twice that. However, as Lance explained to Vince in “Pulp Fiction,” when you try it, “you’ll know where that extra money went.”