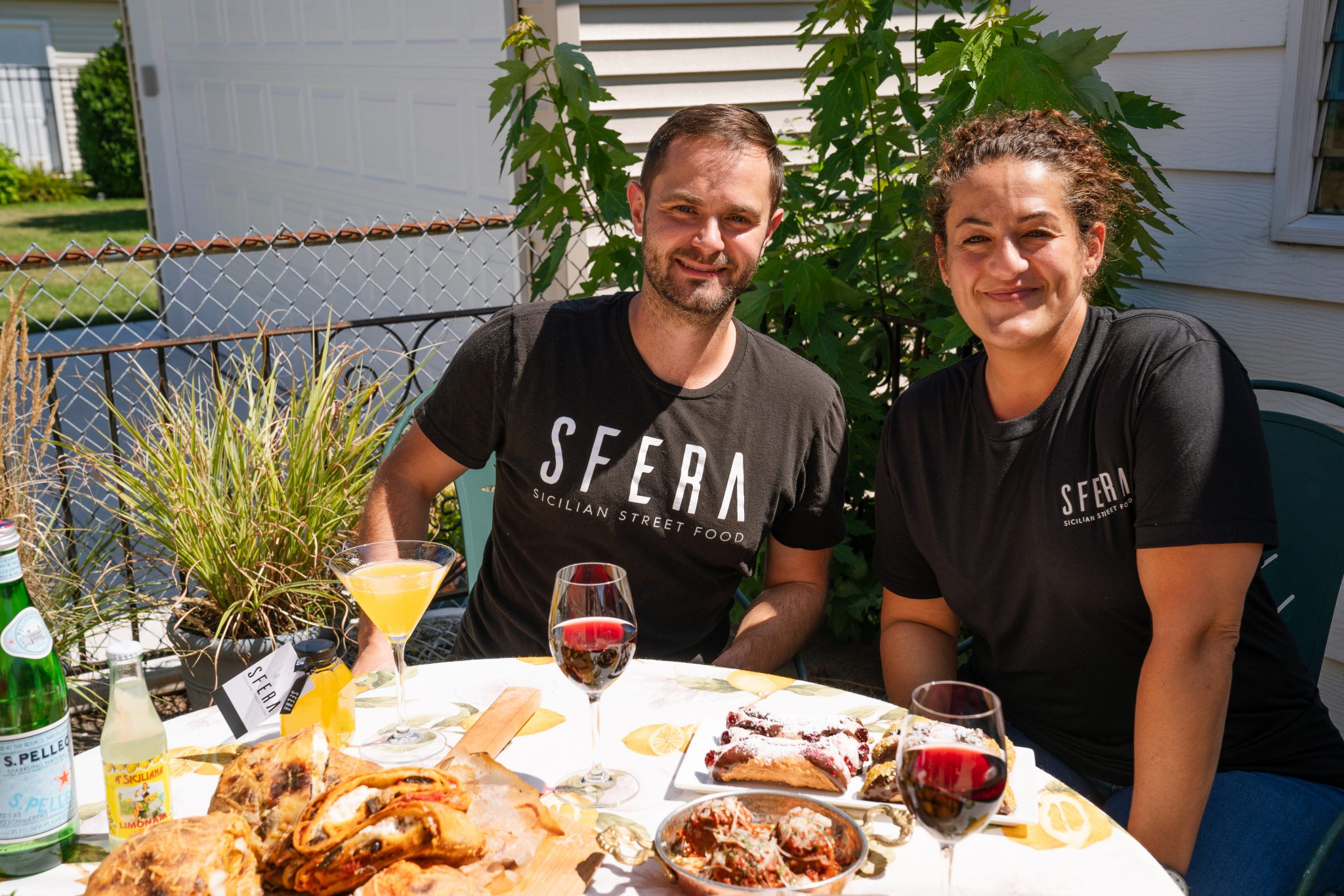 “We started at farmers markets about three years ago with our arancini-stuffed risotto balls—which is our specialty,” says Daniela Vitale, who runs Sfera in Avondale with her partner, Steven Jarczyk. “My family is from Sicily, and I spent every summer there from the age of sixteen to twenty-five. Starting at farmers markets [in Logan Square, Wicker Park and Portage Park] was a very good experience, because we could figure out what people liked and then a lot of people who supported us at the markets started ordering from us at the ghost kitchen. We moved to the ghost kitchen, in part, because COVID forced us to.”

Arancini, the fried gold balls that look like oranges, are Italian snacks known to many and seen at places like Caputo’s grocery store or the annual Taste of Melrose Park, although they’re less frequently seen in Italian restaurants. When I go to Caputo’s or Taste of Melrose, I usually get an arancini to eat on the go. One can see why it’s a popular street food: the orange globes catch the eye and they can be eaten without tableware, while walking and talking and even gesticulating wildly with the hands (because… Italians, get it?).

The most common failing of arancini is that the balance is off between the filling (frequently meat, sauce, cheese and sometimes peas) and the risotto. Sfera’s arancini are a little smaller than most of the ones we’d had, and the filling is generous, so you can get a taste of the filling and the risotto in each bite. The exterior is rolled in panko, the large Japanese breadcrumbs, which crisp up nicely and create a crunchy exterior on each orange ball. “We have a few secrets to our arancini,” Vitale tells us, hesitantly revealing, “We do use panko, but we don’t use eggs, which a lot of people add to their arancini.” 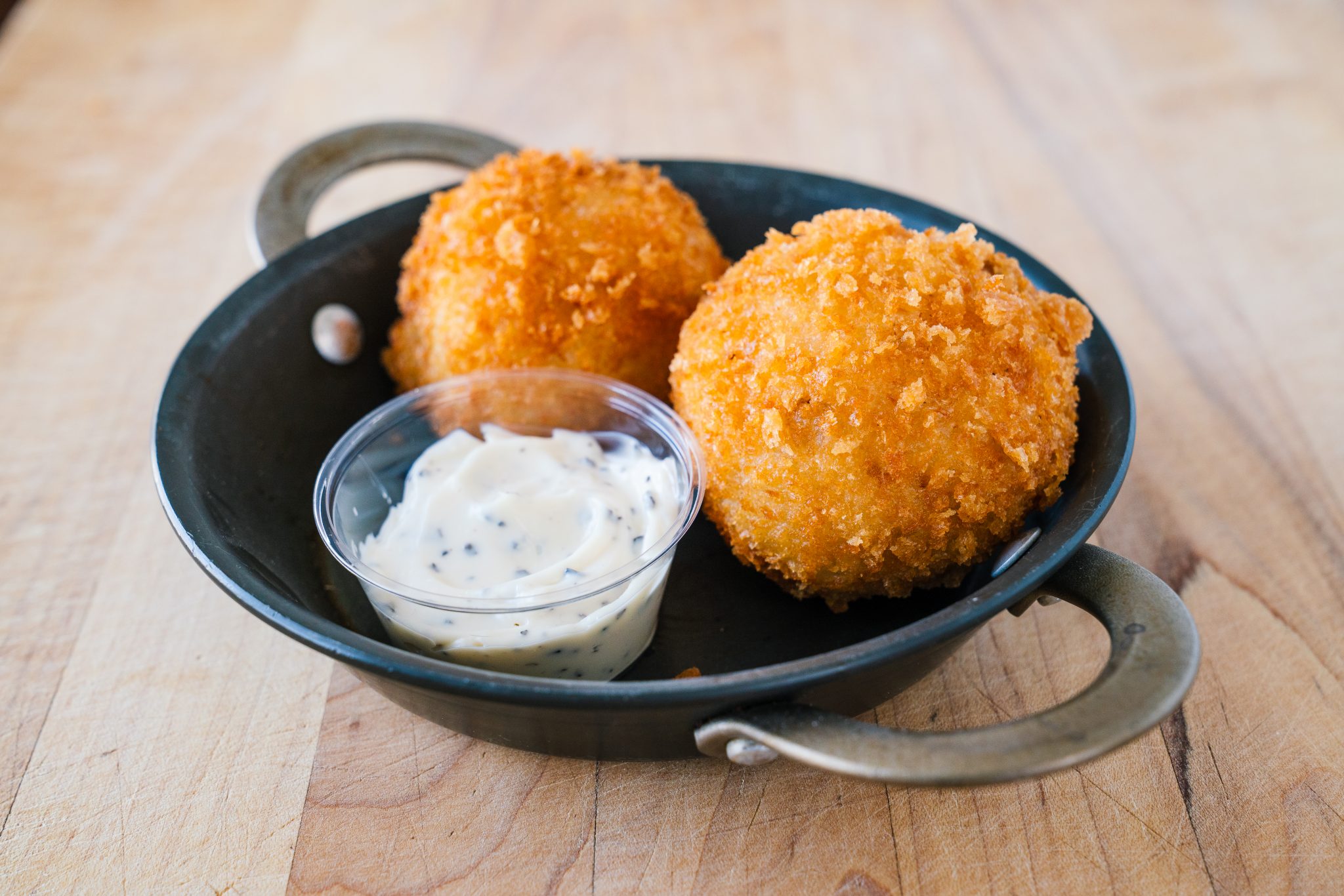 Sfera’s arancini was a hit at the farmers markets because, as Vitale tells us, “it was easy to cook on site.” They’re also delicious, and they look… fun.

Scaccia, which is perhaps more common at Sicilian bakeries than at street stands, became a menu item when Sfera moved to the ghost kitchen, where they have access to a professional oven.

Scaccia is a kind of semolina pizza, folded in half so that in the center, the thin threads and laminations of dough look like noodles. That’s why, Vitale tells us, “some people refer to it as lasagna pizza.” Some might also call it a calzone, stromboli or even an empanada, but unlike any of those turnovers, scaccia is folded into a moist origami of layered dough that creates the trademark noodle-like effect inside the crusty breading.

Like arancini, scaccia looks like something you’d really want to eat… right now. Whatever the filling (and there are several to choose from), cheese oozes deliciously around the craggy crust, and it looks like a large, overstuffed, luscious and gooey sandwich. There are dipping sauces included, which is a good thing, as the best way to eat scaccia seems to be to cut it into strips about an inch or two wide and then dip those strips into the sauce.

“I haven’t met a person yet who didn’t love the scaccia,” says Vitale, and part of the reason for that instant love is that scaccia looks familiar, a little like pizza, and Chicago (as Steve Dolinsky confirms with his books) is a city that loves pizza.

“Coming into adult life,” says Vitale, “I realized I had always wanted to do something of my own. I always loved being in the kitchen and I love my culture. While I was trying to figure out what to do, I met my business partner, Steven, and he’d been to culinary school. So, we snapped our fingers and did it.” 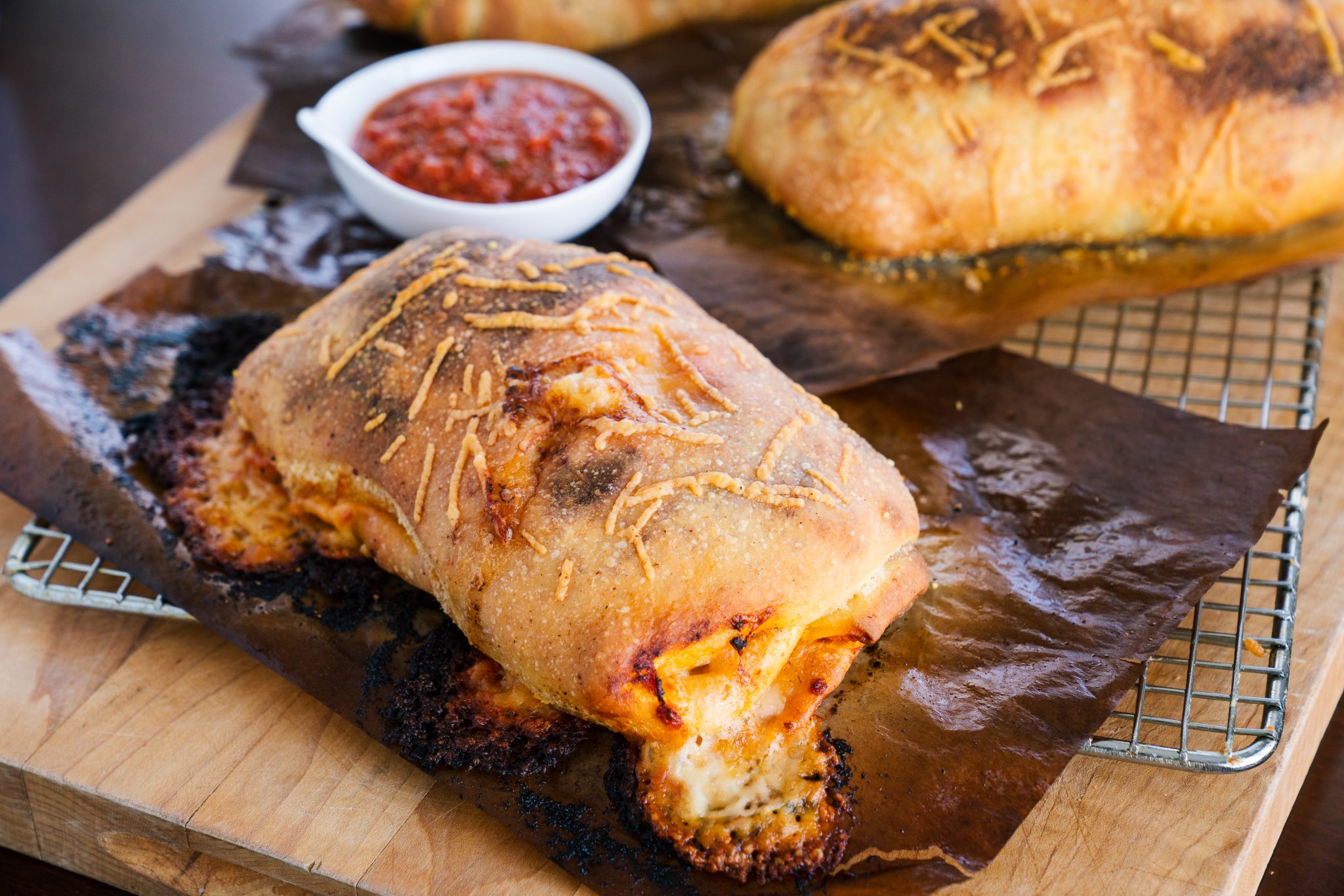 Vitale also offers a Chicago-style scaccia, which contains Sfera marinara, mild Italian sausage, green peppers, mozzarella and mushrooms. For another fifty cents, you get a container of Italian chili and herb dipping oil, and you’ll want to get that as it helps lighten the formidable carbo-load of scaccia. And here’s another pro tip: each scaccia is probably enough to feed two people with moderate appetites. But the stuff heats up very well, so it might be best to get a little more and have it for breakfast the next morning (as with regular pizza, scaccia is very suitable eaten cold for the bleary-eyed first meal of the day).

Though the menu is solidly within the Italian tradition, Vitale says she also “wanted to reflect the Midwest, so we’re working with farmers in Wisconsin and Illinois.”

Vitale plans to offer sfincione, a type of Sicilian pizza that’s much thicker than the traditional Chicago tavern-style pizza, with a breadier base, like what you get at Pizza Friendly Pizza.

Sicily, being an island, must have a lot of fish, and although cooking fish might present problems in a ghost kitchen with its pickup and delivery arrangement, Vitale is thinking she might like to serve “a beautiful Mediterranean octopus salad.”

“How about snails?” I ask, knowing that snails are big in Sicily. Vitale is understandably hesitant to serve such dishes, as they may be hard for Americans to swallow. “Sfincione, for instance,” she explains, “usually has breadcrumbs on top, and sardines.” That would be a hard sell to some customers, but we’re very interested in seeing what other little-known Sicilian foods might come out of the Sfera ghost kitchen, and honestly, if Sfera ever starts offering some of the edgier Sicilian specialties, we’ll be first in line.