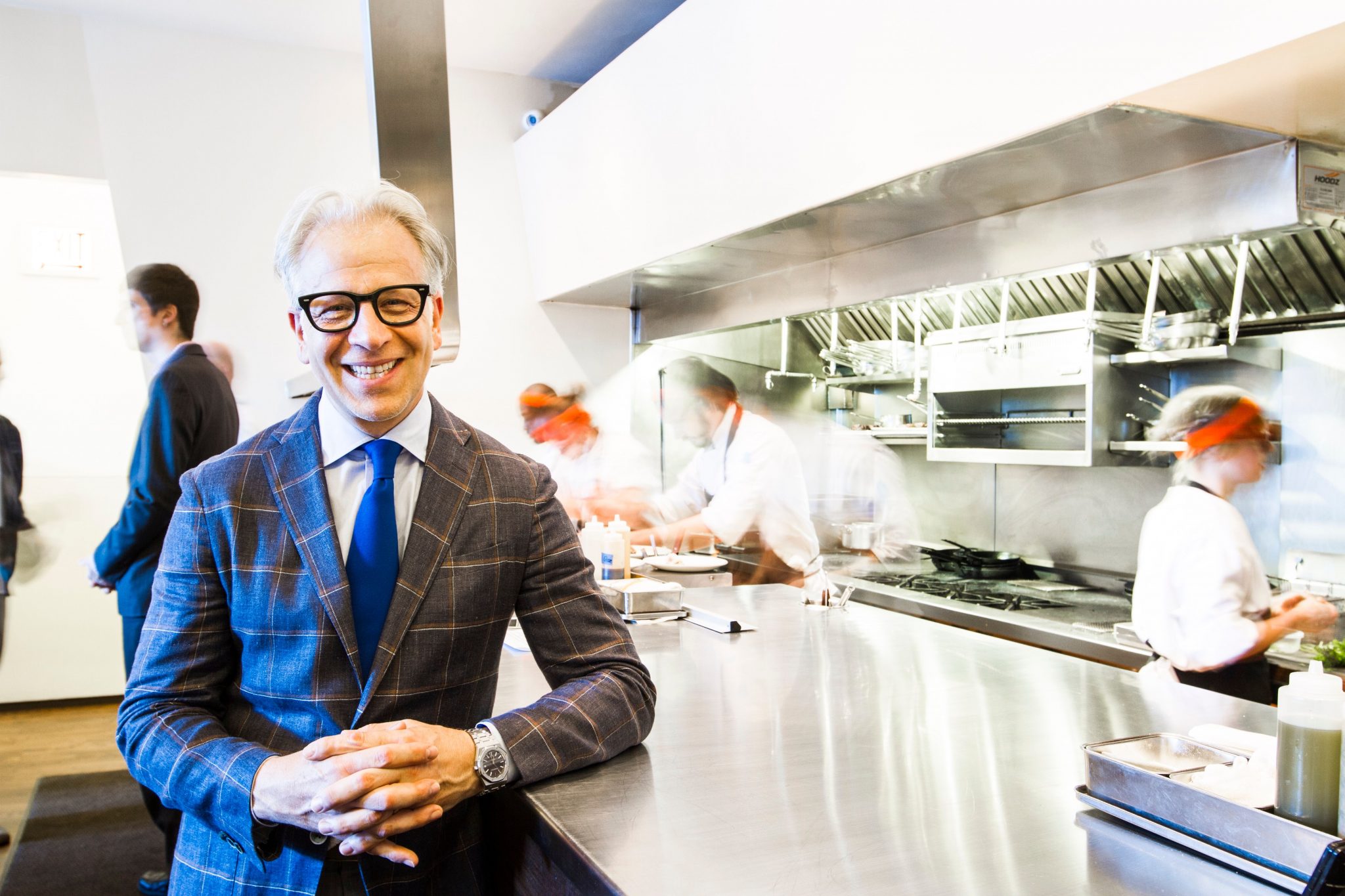 During the past two years, there were moments when each of us felt gobsmacked by the realization that the pandemic was going to change our lives. For some, it might have been the moment we learned of a friend or family member taken ill, or when our employer said we wouldn’t be needed in the office until further notice. For me, it was when I heard that Blackbird was closing. Blackbird was at the forefront of the Chicago restaurants that started people talking about our city as a culinary destination. Anthony Bourdain visited Blackbird to eat and hang with Chef Paul Kahan during an early episode of “No Reservations,” and just walking in the door during those early days, one couldn’t help but sense that this place was a harbinger of bigger things to come for dining in Chicago. When it closed, it felt like we were losing more than just a restaurant.

In addition to Blackbird, One Off Hospitality has brought other breakthrough restaurants and bars to Chicago, including the thriving avec, avec River North, The Publican, The Violet Hour and Big Star.

Madia and I met in the dining room of avec River North, which opened earlier this year in the space previously occupied by his Pacific Standard Time, which closed during the height of the pandemic. I wanted to learn what transformations—aside from closures—have been wrought upon One Off Hospitality by the health catastrophe. Common themes emerged in the communication as well as the newfound sense of community among restaurateurs in Chicago and across the country during our shared national trauma.

Getting Politicians to Listen

Early in the pandemic, remembers Madia, “Everyone was going into a survival mode. Day One, we had maybe twenty people on a call, Tom Colicchio, Andrew Zimmern and others, and on that day, we found a certain amount of money to hire a lobbyist, who is still with us. The common thread throughout this pandemic has been, ‘How are our independent restaurants going to survive and persevere?’ We kept working the phones, working our political friendships, and for the first time, we had the fortitude to negotiate and put a lobbyist on our side and work with us. Having a lobbyist also helped the Illinois Restaurant Association and the National Restaurant Association, because now everyone is covered from the smallest mom-and-pop restaurant on 49th and Pulaski all the way to the top-tier restaurant groups across the country. Within eight months or so, the original members of the Independent Restaurant Coalition went in front of the President and sat with him to tell him what restaurants needed. We were able to shape the PPP, and we explained that we needed a stable stimulation fund to get us through this pandemic. Political people now had an idea of what restaurants go through, how under the name of a famous chef there might be one-hundred employees, and these people have families, so there may be 500 people connected with that one restaurant. Now they’re informed, they realize that restaurants are the largest private-sector business in the nation.”

Communication among restaurateurs and with elected officials has changed for the better since the pandemic struck, but there have been smaller, logistical and operational changes that have transformed the business of One Off Hospitality.

Publican Quality Bread is a subscription service for the exceptional baked goods produced by head baker Greg Wade (who won recognition as a James Beard, Outstanding Baker). Delivering Publican Quality Bread to the lower forty-eight states is becoming a reality, and One Off at Home makes it possible to enjoy the food of their restaurants, delivered to your door. There are a range of delivery packages to choose from, including Kahan’s Perfect Publican Meal Kit (pork and duck rillettes, a marinated farm chicken with potatoes and summer sausage, dessert); from avec, chorizo-stuffed Medjool dates (if you’ve been to avec, you’ve had them); from The Violet Hour, a box of “home bar essentials.” All their packages, spawned in the wake of the pandemic, deliver restaurant-quality food and drink to people who hadn’t stepped inside a restaurant in months.

“Our subscription series for cocktails,” Madia says, “has been wildly successful. This program is a direct result of the pandemic, and it helped propel The Violet Hour through the hardest times of the pandemic. And even though Blackbird, which was the foundation and cornerstone for the entire group, was a casualty of the pandemic, the former Blackbird space is being used for One Off at Home, so it’s also become a positive.”

One of the reasons that Blackbird closed early on in the pandemic was that it was just too small to permit six feet of social distancing between tables. Having everyone so spread out didn’t work; as Madia recalls, “There was room for like ten people in the dining room. Where’s the energy, where’s the vibe? Lunch was always so vibrant and so full. I was married in the alley between Blackbird and avec, and the celebration was inside Blackbird. Julia Child had a 2002 dinner there during the housewares show. There are some beautiful memories there.”

I hear Madia’s voice break, just slightly, when he says, “There’s some fond memories of Blackbird, but you know at the end of the day, maybe we sacrificed that restaurant so the other restaurants would be able to go on and flourish. Blackbird was something near and dear to us as it was to the hundreds of staff members that we employed over the course of twenty-two years.”

Adjusting to a Changing Business Environment

For many restaurants, one outcome of the pandemic was the reduction of menu offerings to minimize waste and focus on those foods that were the most popular or that had the best profit margins.

I ask Madia if he’s felt the need to reduce the size of the menu and the kinds of dishes they offer to streamline the food preparation process and gain some efficiencies. His answer was clear: “No. In fact, avec has a bigger menu than before. And we’re not going to use QR codes either: nobody wants to use QR codes to read the menu. Our menus are going back to paper, unlaminated menus; if they’re soiled, they get thrown out.”

Disposable menus may be a small thing, but it’s all part of the larger effort to ensure the safety of guests and staff. “Helping people feel safe is our job,” Madia says, and that’s why he wears a mask whenever he’s in one of his restaurants; he wants to lead by example. “Our job,” he believes, “is making people feel safe. In the summer of 2020, before we had the vaccinations, I made sure that I measured every table to be six feet away from any other table. My job is to take care of people. There’s no CEO mentality here, there’s only one mentality and that’s to be hospitable and to take care of people, our customers and the community.” 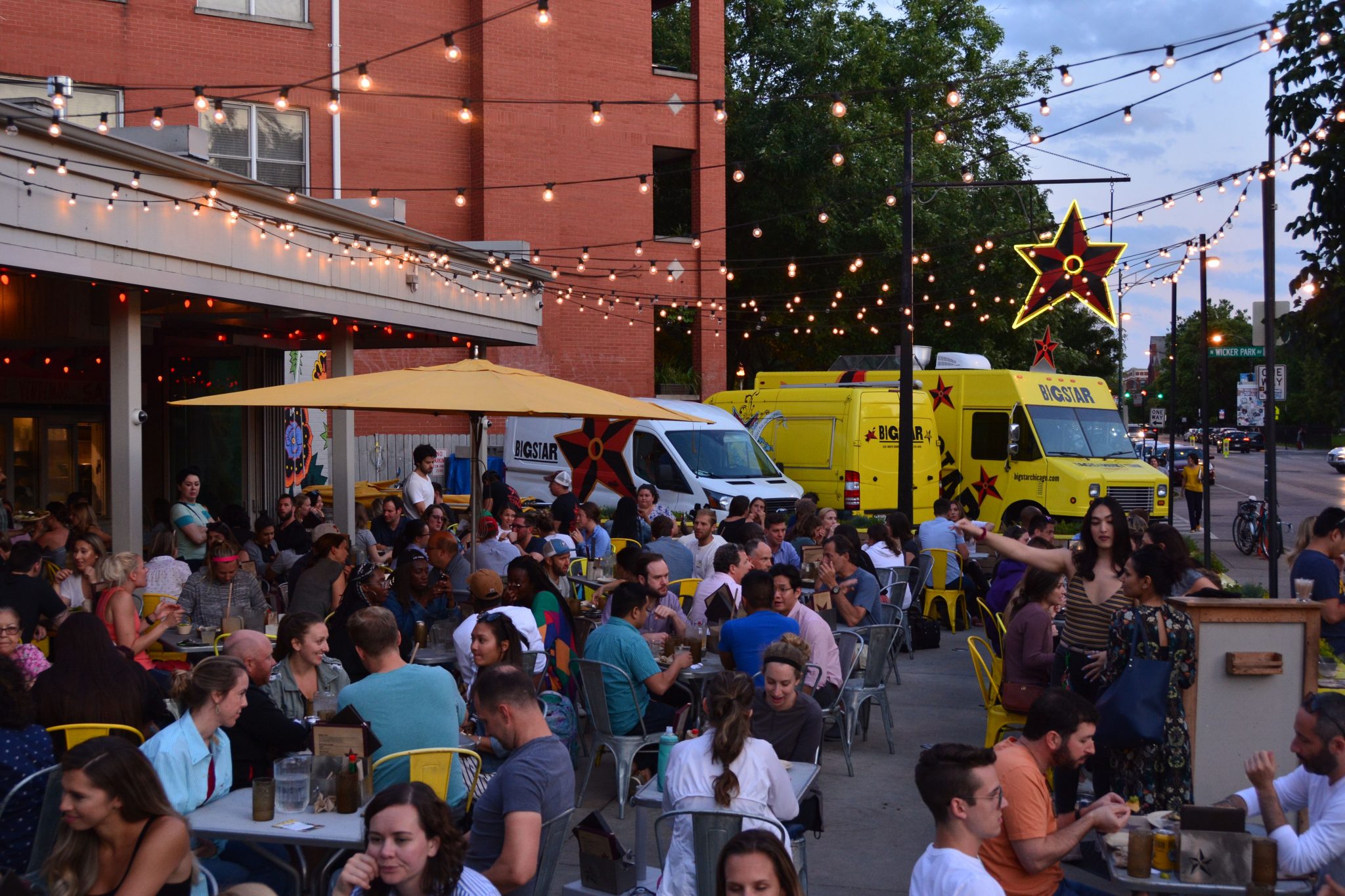 Big Star patio/Photo: One Off Hospitality

A New Sense of Community

“There’s a feeling among chefs and restaurateurs,” Madia says, “that you have to keep going, you have to persevere, you have to think about our suppliers, farmers, fishermen, wood workers, architects, everyone that’s involved in making a restaurant. And you have to think about what those people go through if a restaurant doesn’t make it, if it doesn’t survive. The ripple effect is immense, and I’m just glad that we had the fortitude to engage Congress and the Fed to help us. It’s up to them now. We need another $65 billion to refill the Restaurant Revitalization Fund, because there are a lot of restaurants out there that need this funding and didn’t get it yet.”

“One of my goals,” says Madia, “is to have a ‘vaccination bus’ pull up in front of our restaurants and offer vaccinations to our guests, but also members of the community. Anyone who wants a vaccination can get one. Scott Weiner is doing that at West Town Bakery, and I’d like to do that at our restaurants. We want our staff to get vaccinations, but we want to make vaccines available to the community as well. We’ve also made vaccination buttons to help in that effort, and we’ve made it clear to our guests that we’ll all be wearing masks, because we want everyone to be safe.

“Based on my involvement in the Independent Restaurant Coalition, I’ve tried to reach out to others in the restaurant industry, maybe smaller restaurant owners who weren’t involved in the IRC, and I’ve discovered that restaurants have to be involved in the larger, nationwide community, not just their local neighborhoods, and that we need to support each other. There’s always been a competitiveness between, for instance, the Boka Group and One Off Hospitality. The pandemic compelled us to leave all that behind. Now we’re talking together and working together for the good of the whole restaurant community. We’re sharing information, and that just didn’t always happen before the pandemic. In the past, we might have kept information to ourselves and executed it ourselves. Now, we share new information, we call others in the industry, and we let them know about it. Because of this pandemic, we talk more together, and we work more together.”

One point that kept coming to the fore in Madia’s words was the need for communication, thinking hard about how others are affected by the pandemic. In answer to the larger question, “How has your business transformed itself?” Madia has one word: “Empathy. Our business has transformed itself through empathy, through an understanding of what people are going through right now and an understanding that we—restaurateurs, staff, and the larger community—are in a different world.”