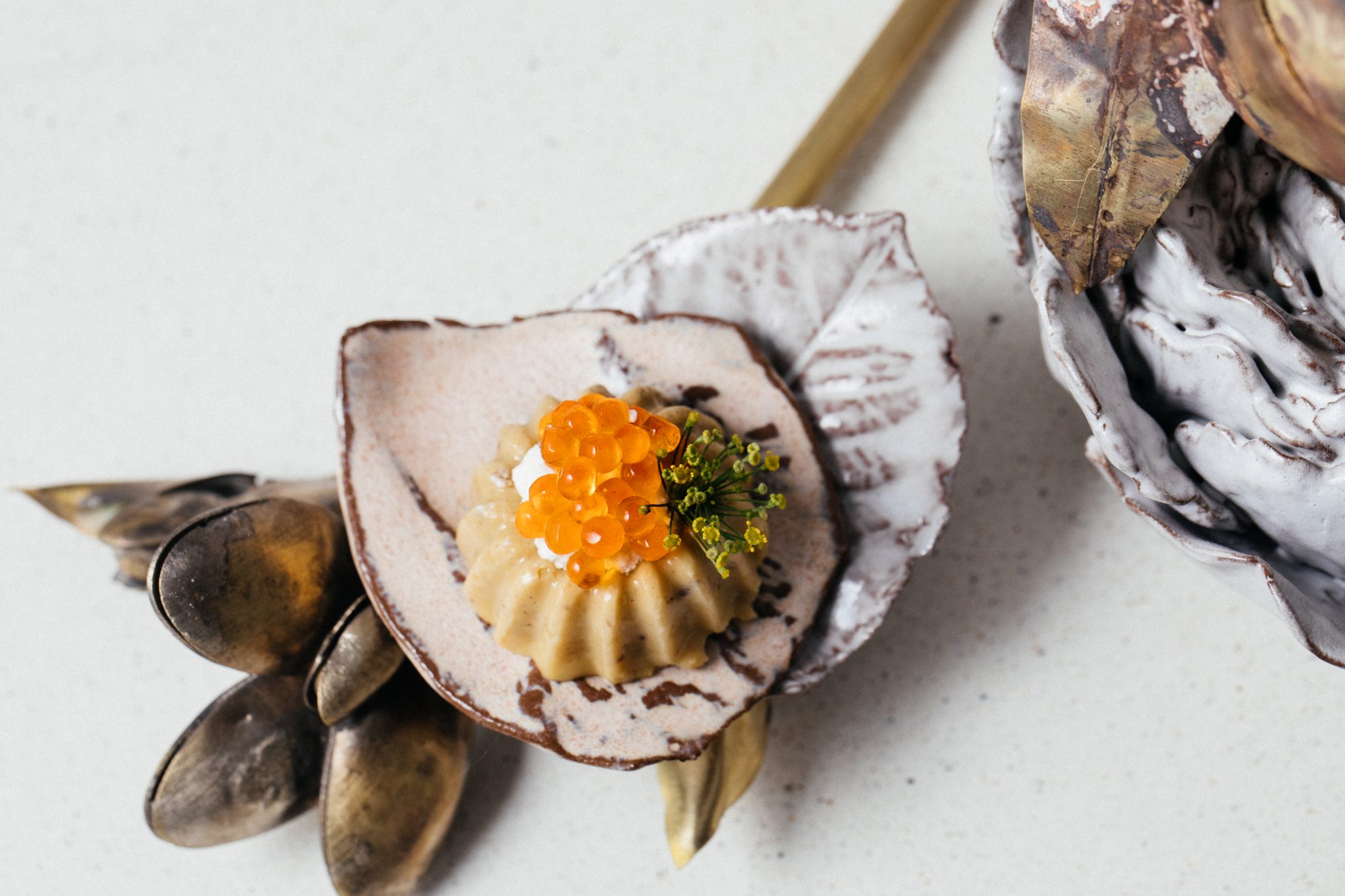 When Jenner Tomaska set out on his own after seven years at Next, he knew his new venture would have to be “more than a restaurant.”

“How can we merge our passion for the arts, and I think cooking is an art as well, but also our passion for helping others, contributing to our community?” says Bravo, who was an art major and worked in marketing for Alinea Group.

They came up with Esmé, a community-focused art space and restaurant that will support philanthropic projects.

The restaurant features a bar on one side and on the other, a fine-dining restaurant with a tasting menu. Aron Fischer of Fracture Goods designed much of the ceramics, glass and brassware in the restaurant. Bravo says Tomaska finds joy in sourcing interesting vessels for his food, something he began at Next.

“He’ll look online for things, find people and reach out to them like, ‘Hey, I’m a chef and I want to use your work,’” she says. “Those relationships have become more than just people who are making us things, but also our creative collaborators.”

A longtime art enthusiast, Bravo seeks out up-and-coming artists to feature in the restaurant, like Amanda Rivera, who goes by Raspy Rivera, and who Bravo calls “someone to discover.” Rivera created a custom wallpaper for the bar and will be featured in an upcoming collaborative dinner.

Perhaps the highest-profile artist working with Tomaska and Bravo is Chicago-based photographer Paul Octavious, who produced a video for the launch. Octavious raises money for photographers who might not have access to cameras and other gear, and he shot a video showcasing Tomaska’s creative process in the kitchen. Tomaska and Bravo credit him with inspiring other artists to get in touch. “He’s a connector,” Bravo says. “People see we’re working with him and that we take it seriously. These artists have reached out because he made this stunning video, and they want to participate in this endeavor.”

They’re also working with Kitchen Possible, a program that teaches kids critical thinking skills and life lessons via the kitchen. Tomaska plans a series of classes with the kids where they learn how to make a few dishes and then they come into the restaurant for a dinner; ticket sales for that dinner benefit the organization. 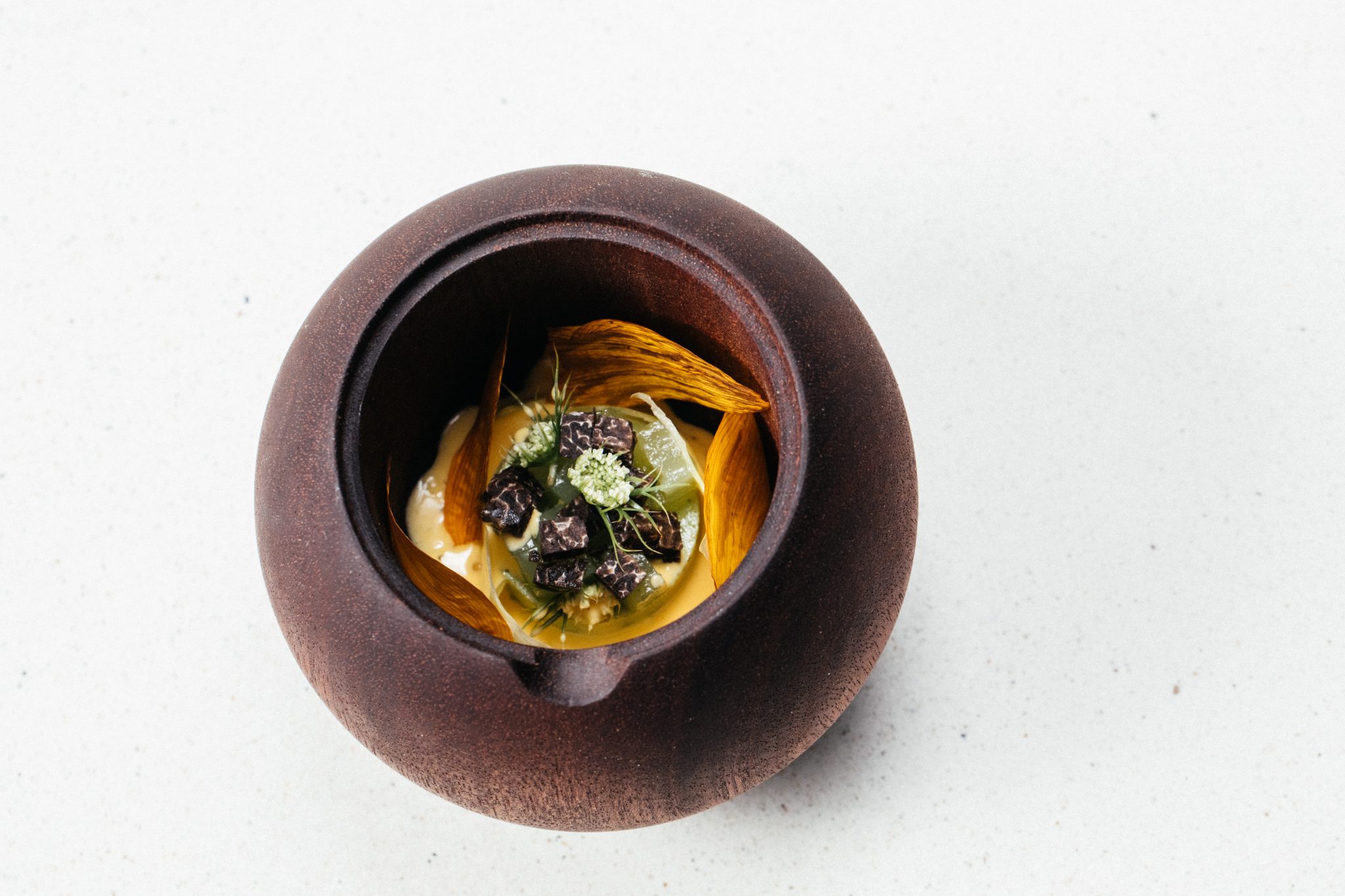 Tomaska says he wants to shift the narrative to “de-emphasize the food,” but Esmé is, of course, still a restaurant. Diners can expect twelve to sixteen courses that change seasonally. Dishes on the opening menu include a carrot dauphine with rye-spiced ricotta and smoked trout roe; oyster and grilled and fermented poblano mignonette; raclette pierogies with burnt onion consommé and truffle; a sablefish with squash blossoms, bagna cauda, artichoke and zucchini barbajuan; and a wagyu éclair with salted strawberries, pine and parsnip.

Tomaska is looking to artists to inspire the menu. For example, Fischer crafted a brass and ceramic nature landscape with leaves and flowers that fit together like a puzzle. Tomaska loved it so much he created a block of canapés inspired by the tray.

“The conversation has always been led by artist-driven work that’s inspiring the food,” Tomaska says. “The food will be in the style of a tasting menu, but the art side of it comes first.”

He’s especially excited about the wine list from wine manager Tia Barrett, who also worked at Next and The Office. About seventy-five percent of the wine and liquor list features winemakers who are women or people of color, or who have a philanthropic tie. “My mission,” says Barrett, “is to tell these stories.”

On the opening wine list, one of Barrett’s favorites is the Michael Lavelle Iris Rosé. “I chose this wine first because who does not want to crush rosé on the patio in the summertime in Chicago? This wine also checks off all of the criteria that one looks for: not too sweet, a just-right light pink almost golden hue, crisp minerality and it easily stands up to food,” she says. “Then the deeper reason: it’s a wine that needs a platform. This is the only wine produced by four men of color from Chicago in California’s Central Coast and Paso Robles—all things that are not common when you speak of rosé. Finally, their wine directly gives back to The Roots Fund, a nonprofit whose mission is to support, educate and provide for people of color in the wine world.” 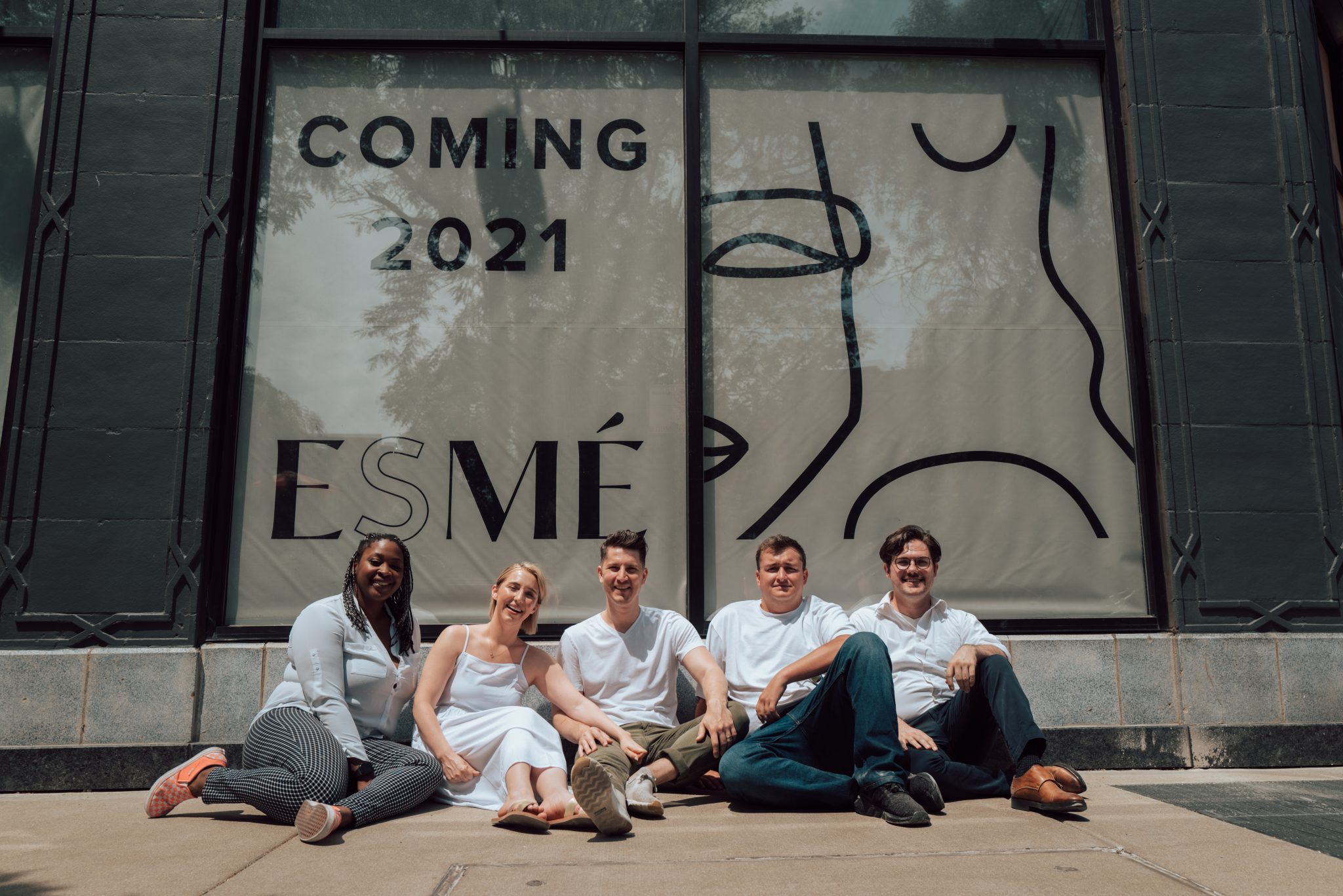 Even Esmé’s water has a mission. The restaurant will serve Agua de Piedra, a natural spring water from the Huasteca basin in Nueva Leon, Mexico, characterized by a stony, mineral flavor. The family started the water company as a brewery (you need good water to make good beer) and branched into water in 2003. Agua de Piedra uses transition bottles. When a glass manufacturer changes the color of the bottles in their manufacturing plant, the change happens gradually. As a result, thousands of what are known as “transition” bottles are produced and typically end up going to waste. A portion of Agua de Piedra proceeds also go back to the laborers in the Huasteca basin.

This fall, Tomaska and Bravo plan to hold dinners with local artists. The artists’ pieces will be exhibited throughout the restaurant, highlighted during the meal, and will be available for purchase. Proceeds from the meal will support the artist’s philanthropic endeavors.