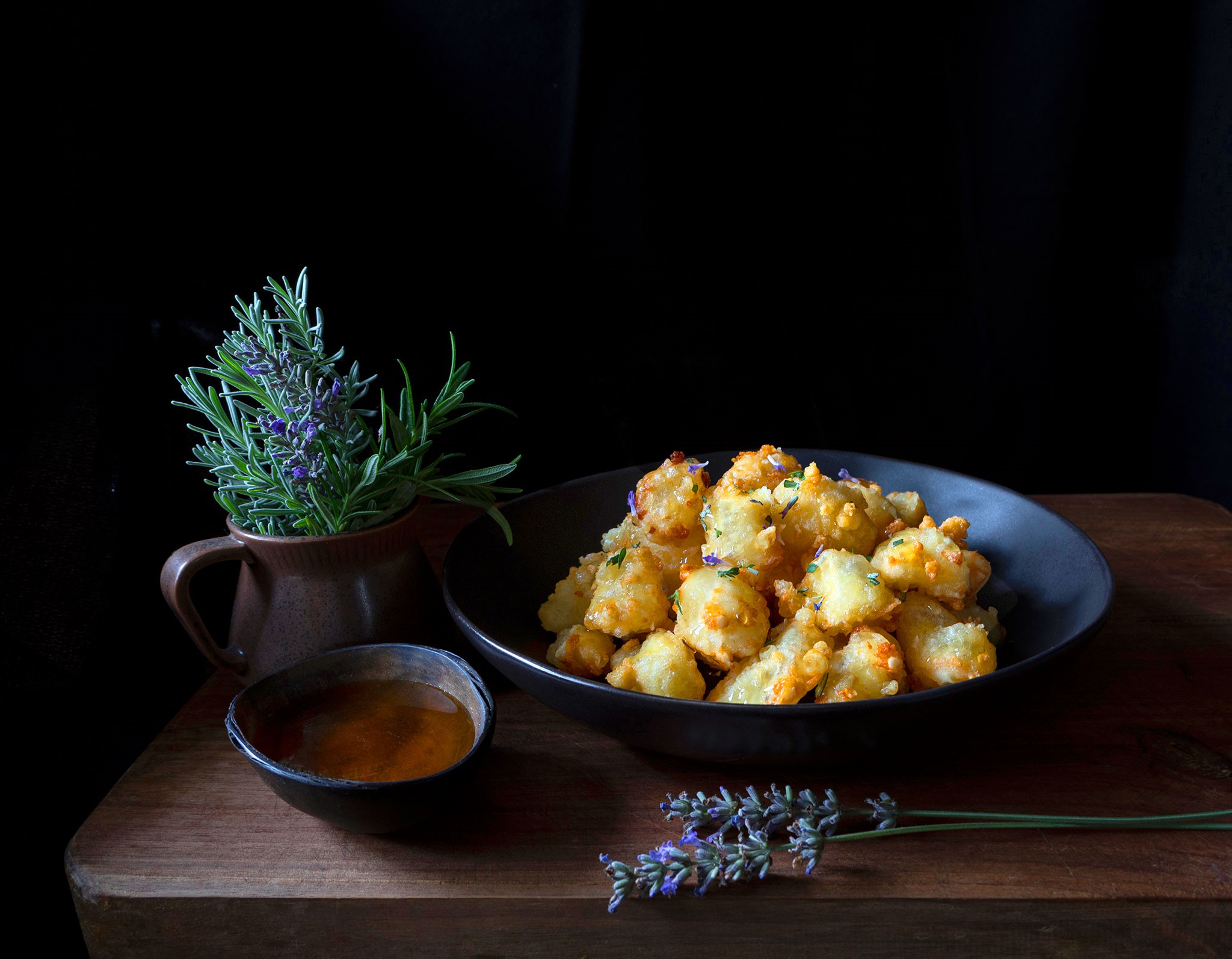 Fresh out of the cheesemaking vats, cheese curds squeak when you bite ‘em and they have a milky, mild flavor that’s hard to resist. Traveling anywhere near the scads of dairies in surrounding farmlands, Chicagoans will pull off the road for bags of the little nubbins to eat out of hand. They’re hugely popular in restaurants and bars, too, coated in batters and deep fried, or they can be topped with French fries and a thick blanket of gravy in variations on the classic Québécois poutine. You’ll find curds menued from Prairie Grass Café on the North Side, to The Duck Inn on the South Side, where they come with housemade Bloody Mary ketchup and hoppy mayonnaise sauces, a throwback to Chef Kevin Hickey’s college Sundays in Wisconsin, “eating fried curds with a Bloody Mary that always came with a beer back.”

But with so many varieties of cheeses made, I couldn’t help but wonder: Why are most cheese curds cheddar?

“The shape and texture of cheddar curds works well for deep frying, and the taste is very popular,” explains master cheesemaker Chris Renard of Renard’s Cheese and Rosewood Dairy in Door County, which sells a million pounds of cheddar cheese curds each year. “Some makers add flavorings after the curds are made,” says Renard, “and a few sell other varieties of curds, but I think cheddar curds are better-eating.”

But even cheddar curds can have subtle differences in taste, depending on everything from the quality of the milk, to what the cows were eating, to the microflora that exists in every cheesemaking facility.

Bigger flavor differences come from the style and make of the cheese—especially, if another animal’s milk is used, such as goat’s milk.

As much as the Midwest might wish to claim provenance for the snack, that distinction goes back to the ancient Romans. The oldest surviving work of Latin prose, “De agri cultura” (On Farming), written by Cato the Elder in 160 B.C., included a recipe for globuli, little globs of cheese curds rolled in flour, fried in hot fat, drizzled with honey and sprinkled with poppy seeds. Since the Romans much preferred milk from goats and sheep over cows, it’s likely globuli were made using curds from those non-bovine milks.

And so it was that armed with a few pounds of goat’s milk curds from LaClare Family Creamery in Malone, Wisconsin, and cheddar curds from Renard’s, I set out to create both a version of the ancient dish and a tasty poutine.

I was skeptical about goat’s milk curds at first, thinking they’d be soft as chevre and too goat-y in flavor. But they have a surprisingly firm texture and mildly tangy flavor. And with fresh herbs, lavender and honey, they are delicious.

Preparing Curds and Poutine at Home

For the goat cheese curds, you’ll use plain seltzer water (or lemon LaCroix works great) in the batter with cake flour. Don’t worry that it’s thin; this makes for a lovely fine crust that fries up quickly.

And for the poutine? You’ll need a knife and fork to take down a plate of that French-Canadian nibble. Topping French fries with curds and hot gravy makes a delicious melty mess that should be eaten as soon as you make it.

Place 1 cup cornstarch in a wide shallow bowl. Set aside. In a second bowl, whisk 1 tbsp. cornstarch with 1 ¼ cups cake flour and a pinch of salt. Whisk in the sparkling water. Individually roll cheese curds in cornstarch, shaking off excess starch. Dip coated curds in batter (which will be thin) and add to fryer basket. Fry four or five curds at a time, being careful not to crowd the basket. Fry for about two to three minutes per batch, until bubbling has subsided a bit and fried curds are golden. Remove fried curds to paper toweling to blot oil. Place in serving dish. Drizzle with honey and sprinkle with snipped herb leaves and lavender blossoms. Serve immediately. 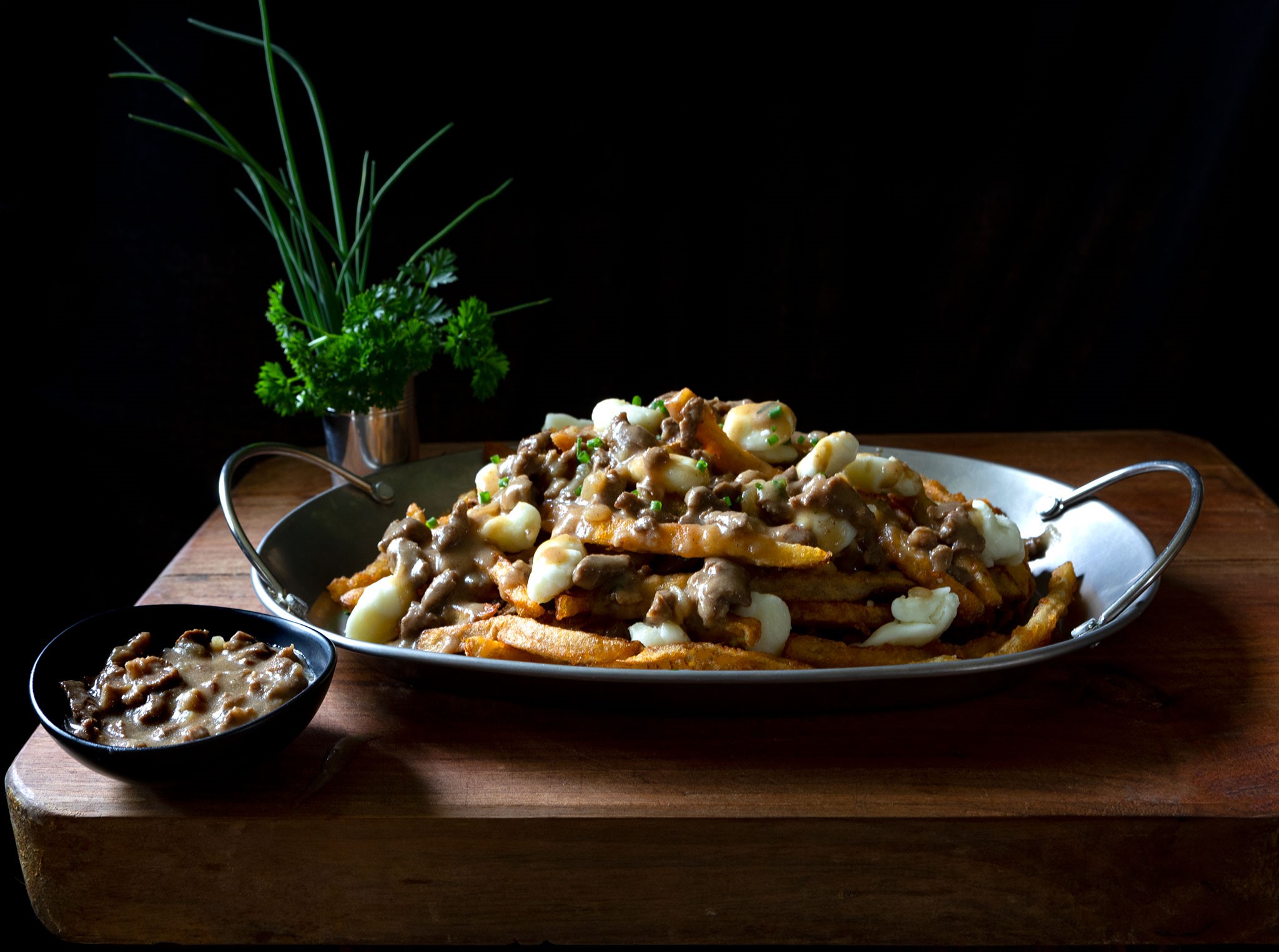 On a clean cutting board, slice each potato in half lengthwise. Flip each half onto its cut side and slice into four even lengths. Turn each of these on its side and slice into long strips, each about ¼ inch thick, working to keep each of the fries about the same thickness to ensure even frying. Place fries in a large bowl of very cold water. Soak for one hour. While the potatoes soak, make the gravy. (See below.)

After an hour, remove potatoes from the water and pat dry very well. Preheat oil in a deep fat fryer to 350 degrees. Spread a large cookie sheet with several layers of paper toweling. Working in batches, blanch 2 cups of the potatoes at a time in the hot oil for 3 minutes each. Remove each batch to the paper towel-covered cookie sheet to drain and cool.

Increase fryer heat to 400 degrees. Working again in 2-cup batches, fry the potatoes a second time, about 4 to 5 minutes, watching closely until potatoes are golden brown and crispy. Drain well for a second time on fresh paper towels.

In a sauté pan over medium-low heat, add diced onion and 1 tbsp. oil. Cook, stirring for two minutes. Add ¼ cup water and continue cooking, stirring occasionally until onion is soft and translucent. Add remaining olive oil and finely chopped beef to sauté pan. Increase heat to medium and fry the beef, stirring, until the meat is cooked through. Remove onions and beef to a bowl. Melt butter in a pan over medium heat. Whisk in flour to make a light roux; toast, whisking constantly until browned. Gradually whisk chicken and beef stocks into pan, creating smooth gravy. Whisk in coffee and Worcestershire sauce. Stir in reserved onion and beef. Adjust seasoning with additional pepper to taste. Keep warm while you fry the potatoes.

Fill a plate or bowl with fries, scatter a handful of cheese curds over the fries and ladle on the gravy. Serve immediately.

Monica Kass Rogers writes, photographs and makes LittleBlue letterpress prints from her homebase in Evanston and studio at the Chicago Printmakers Collaborative in Chicago. She started writing as a national food magazine editor after degrees at Texas Woman’s University and photo studies at the School of the Art Institute of Chicago. Her editorial work as a photographer has been featured in Bon Appetit, Food & Wine, Chicago, Newcity, the Chicago Tribune among others. Her fine-art photography can be viewed at Dreambox Gallery in Chicago. Writing, she delves into photography for Communication Arts magazine, and has done columns and cover stories for six sections of the Chicago Tribune, plus many magazines. She thinks she was a crappy food critic for the Suburban Sun-Times (knew too much about the difficulties of running a restaurant to be tough on the operators). She gravitates topically to art, architecture, literature, women’s issues, food & spirits. Her first collaborative cookbook project, “Risotto and Beyond” written and photographed for chef John Coletta, is being published by Rizzoli NY March, 2018. Her vintage-recipe-revival blog is http://lostrecipesfound.com Contact: monicarogers@hotmail.com Website: http://monicakassrogers.com