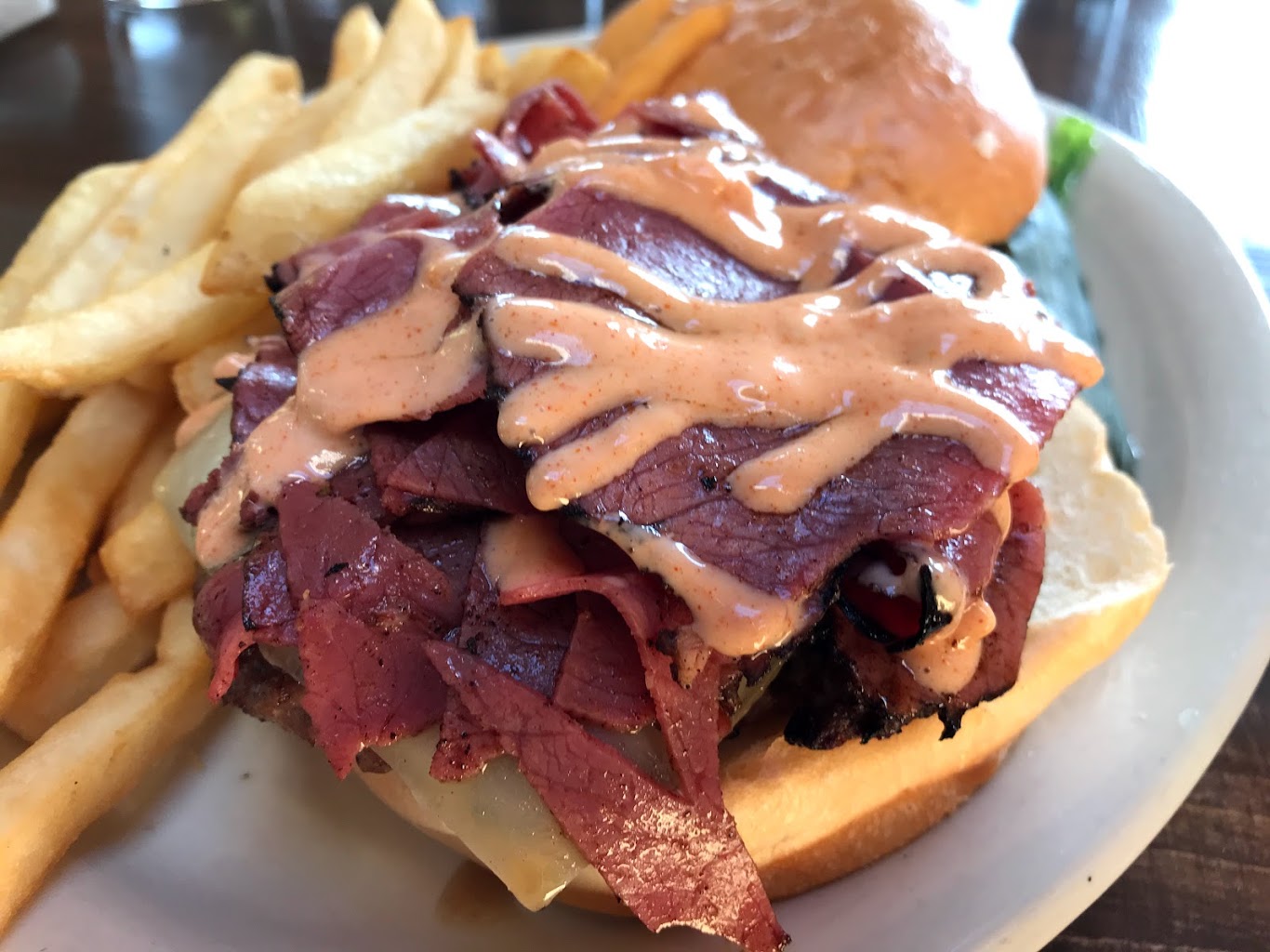 Most people don’t go to Utah for the food. But we did, and what was sought were the foods and drinks that were limited to the lands within the Utah state lines, foods that reflect the tastes and history of the place, foods that are hard to find even in nearby Colorado but that are immensely popular in the Beehive State.

Pastrami Burger
Pastrami, the peppered brisket we know from delis everywhere, is maybe not the first condiment you’d think to add to a hamburger, but that’s what a Utahan Pastrami Burger is, a hamburger with lettuce, tomato and onion, dressed up with slices of pastrami. Sometimes a sauce might be added—for instance, Russian dressing—and the sandwich is darn good. The flavors do not get lost in one another, and if you’re lucky, the slices of pastrami are rich and salty and a pleasing accompaniment to the griddled ground beef (or as is sometimes the case in Utah, bison). A few fast food chains offering the Pastrami Burger, like the popular Apollo Burger, which has outlets in northern and southern Utah.

Fry Sauce
As the name implies, Fry Sauce is a condiment for French fries, but it may also be served with hamburgers and other foods. Belgium, the home of some of the best fries in the world, is also the home of sauce andalouse, a mixture of mayonnaise and tomato paste, which seems like a natural combo, balancing acidity with creaminess, sweetness with light sourness. Like sauce andalouse, Utah’s fry sauce is a mixture of mayonnaise and ketchup, and some of the best versions add flavor from onion, garlic or jalapeños. There are bottled versions of Fry Sauce available at Utah grocery stores (so you can take some home with you, as we did).

Lime Jell-O
Okay, before you say it, it’s true that you can get Lime Jell-O just about anywhere in the United States, but in Utah, it holds a special place of honor. Sometimes referred to as Mormon Salad, Lime Jell-O is the Official State Snack of Utah (no kidding), and during the Olympic Games in Salt Lake City, Olympic pins featuring the wiggly green dessert were collector’s items. It may not be much, but it’s a Utah favorite, particularly at buffet counters, cafeteria lines and, probably, funeral luncheons.

Funeral Potatoes
Gaining popularity among Latter Day Saints as a relatively easy and comforting dish to bring to the bereaved after the funeral, Funeral Potatoes are a simple food, and like Lime Jell-O, you can easily make them at home. Funeral Potatoes are a potato hot dish, or casserole, with the hash browns (recipes usually call for “frozen”), maybe onions, probably a can of soup (cream of chicken, mushroom or celery), cheese, and a topping of crumbled corn flakes or potato chips or, for the fancier chef, panko. Funeral Potatoes make a good side dish for almost anything, with a pleasant punch of creamy and crunchy salty sourness. 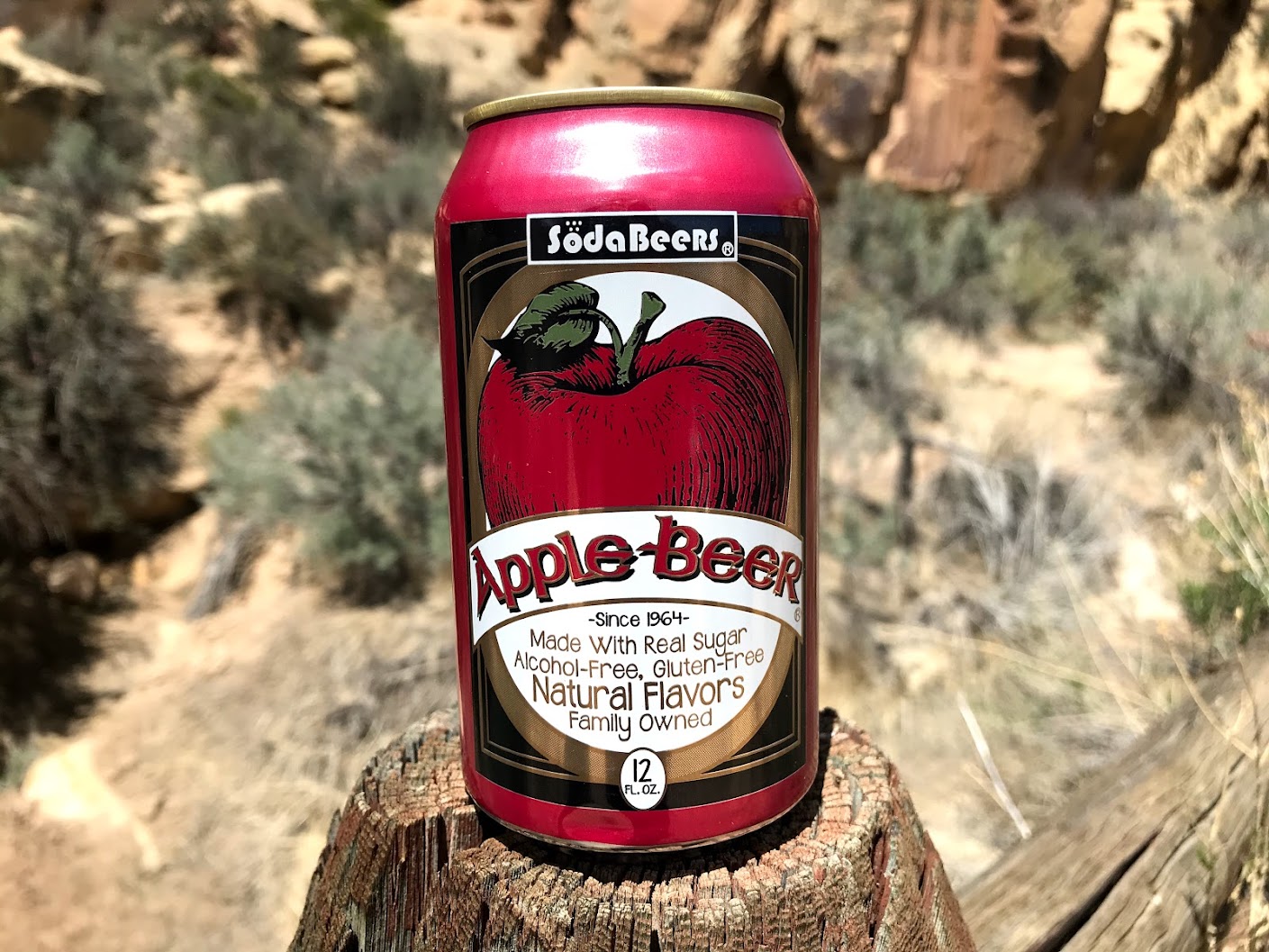 Apple-Beer
Developed in Germany and then brought to the United States, where it’s produced in Salt Lake City, Apple-Beer is a crisp apple soda, effervescent and not as sweet as many apple juices. Apple-Beer is distributed primarily in the West and in mountain states, so you’re not likely to see it very often east of the Mississippi. In a state like Utah that’s largely dry, Apple-Beer is a welcome alternative to sugary sodas. After you’ve been hiking for miles through the mountains and desert, Apple-Beer offers welcome relief.

Mormon Tea
Indigenous people, as well as the Latter Day Saints (who traditionally forbid caffeinated beverages like coffee and tea), made “tea” from the ephedra plant, which we saw growing all along Utah’s dusty highways. Tea made from the ephedra plant is a stimulant which can be toxic at higher dosages. This toxicity is one reason why ephedrine, a dietary supplement that contains an alkaloid from the ephedra plant, was banned in 2004 for sale in the United States. Consuming ephedra can lead to hallucinations, and some scholars posit that ephedra is the soma referenced in the Hindu “Rig Veda,” perhaps the world’s oldest religious text. Because of its known toxic effects, Mormon Tea seems uncommon (none of the park rangers or visitor’s bureau staff we spoke with had ever tried it), and you will not likely find it on menus. 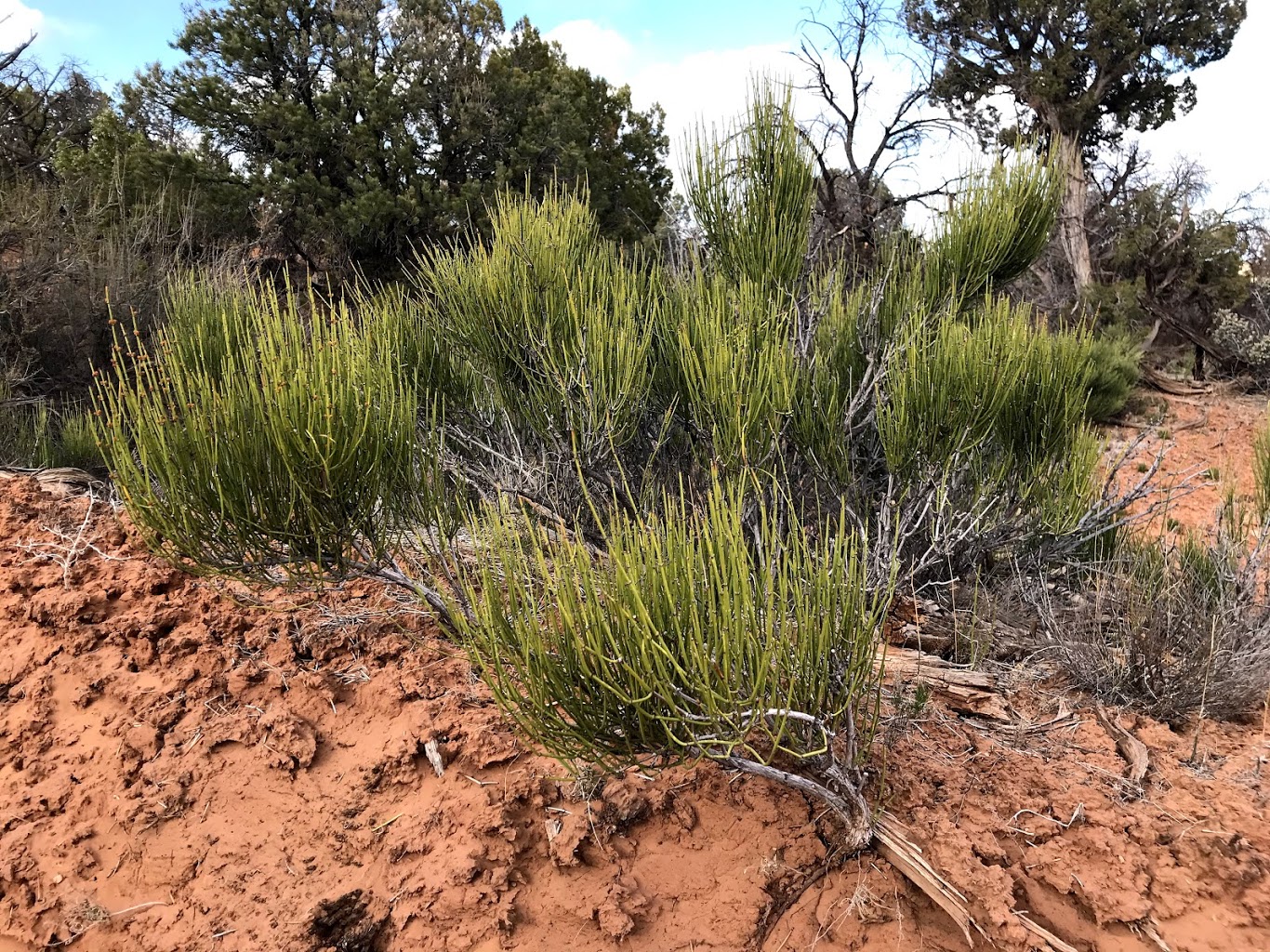 Utah Scones
Triangular or rectangular baked goods popular in the United Kingdom and around the world, scones also turn up frequently in Utahan bakeries and coffee shops. In Utah, scones are a little different than what you might expect to find in London or Edinburgh. Utah Scones are Navajo Fry Bread, a kind of fried dough or sopapilla, found at many pow-wows and a food that’s strongly associated with life on the reservation. Native peoples on reservations received rations of wheat flour, which, although not found in the traditional Native America diet, was used to produce the now-popular Fry Bread. Navajo Fry Bread is topped with Utah honey and sometimes butter, et voila: a Utah Scone. 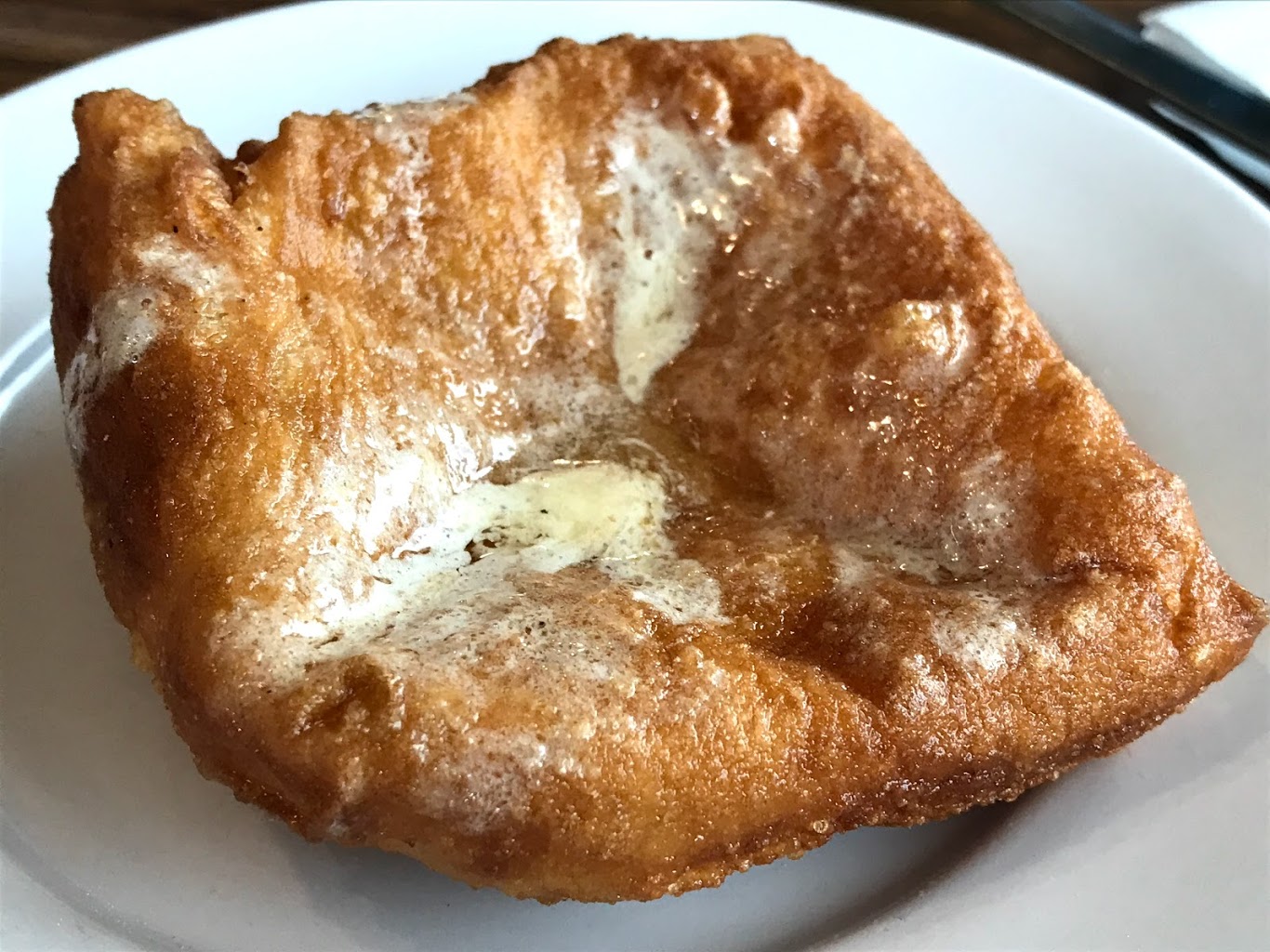 Utah Honey
Utah is called the Beehive State, the bee is the official state insect, and when Utah was applying for statehood, Brigham Young proposed that the name of this new state should be Deseret. In the Book of Mormon, “deseret” is said to mean “honeybee” in the language of the Jaredites who, after the Tower of Babel was built, came to North America in search of a homeland, which they eventually found in Utah (where almost seventy-percent of the population is LDS). The shared values of the Latter Day Saints, including a sense of community and a commitment to industry, are exemplified by the honeybee, and although you can get honey just about anywhere on Earth, the sweet and natural syrup is, in Utah, of high quality and very dear to the hearts of all.

Travel can be disorienting, and it’s understandable why some travelers seek foods they already know when they’re on the road. The last thing many of us want to eat when we travel, however, is something easily procured at home. Eating the distinctive foods of a place is one of the surest ways to get a sense of the people and the history of that place. The taste, the flavor of the stuff, is almost secondary, though a few of these items—for instance, Pastrami Burger, Fry Sauce and Utah Scones—proved to be especially delicious.