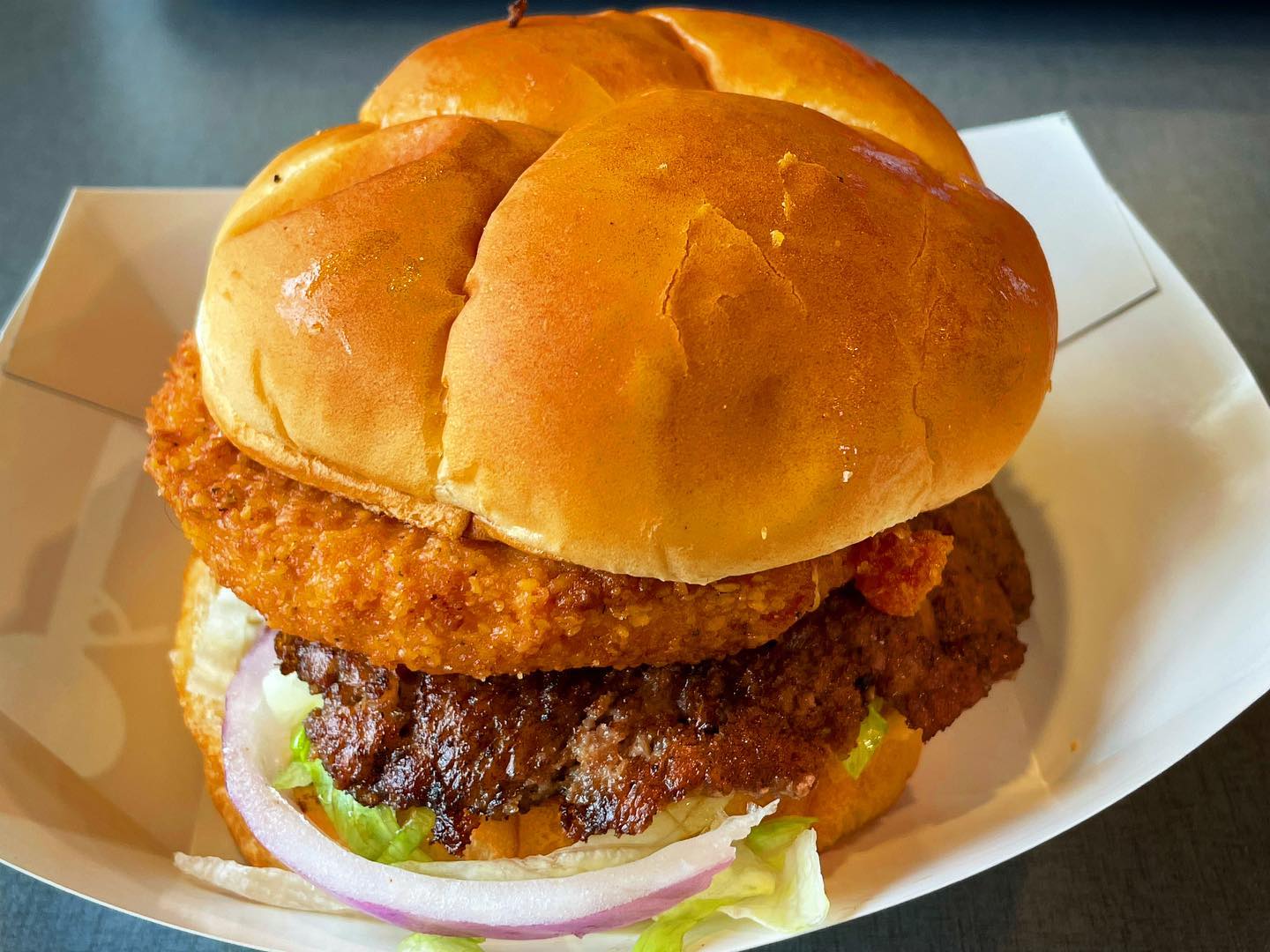 On Friday, October 15, Culver’s—the Wisconsin-based quick-service restaurant chain, famous for their ButterBurger and frozen custard—offered, for one day only, the CurderBurger, a combination of their hamburger and fried cheese curds.

Culver’s makes a pretty good burger: fresh meat, not frozen, and prepared to order, which means that, unlike other QSRs, the burgers are not pre-cooked and they don’t spend time under heat lamps. At Culver’s, you get a delicious burger, not one of the fancy gourmet versions you find at places like Kuma’s or Au Cheval, but for a commodity product, clearly a cut above McDonald’s or Burger King.

Deep-fried cheese curds are already offered at Culver’s, and they’re also just fine, though we prefer to have such mildly flavored snacks in a Wisconsin bar paired with a cold one.

The CurderBurger combines the burger and the curd, but the curds are pressed into a burger-sized disk that sits atop the beef patty, which probably makes the curds easier to handle in the kitchen while creating a distinctive look.

The CurderBurger, alas, is a pointless exercise. Cheeseburgers are best when the cheese brings something to the table, a little sharpness, perhaps, or the slight funkiness or “mild tanginess” that comes from a goat cheese curd, which Monica Kass Rogers wrote about a few weeks ago. With the CurderBurger, the unaged cow cheese in the curd is low on flavor, and it gets lost in the heartier flavors of the burger, so it adds very little to the sandwich besides richness and calories. And with a disk of cheese on top of the burger, the layers of the sandwich almost instantly slipped apart in our hands, a mess. (And no squeak on those curds, either.)

Like the very tasty Popeye’s Buttermilk Fried Chicken Sandwich, which was introduced and then briefly discontinued because they ran out of chicken (yeah, right), creating temporary scarcity and increased demand, the CurderBurger was to be available only for a day. We expect it will return.

The CurderBurger is a gimmick, a stunt to attract business, but in the end, an empty piece of work, though a popular one, as reports came in of CurderBurgers selling out at many Culver’s.

For dinner later that day, we planned to eat light at “A Recipe for Disaster!” described as a “food-filled farce,” a joint production of Chicago Chef Rick Bayless and Windy City Playhouse, held in the downstairs club area of Petterino’s in the Loop.

After a gimmicky lunch, I was prepared for a gimmicky dinner theater experience. The play is described as a “fully scripted immersive event,” with “tastes of cocktails, wine and food created by Bayless.” The food served is nothing like the well-researched and expertly prepared creations you might find at Bayless’ Topolobampo and Frontera Grill, and some of it was intentionally inedible. What? Yes, I’m referring to an onstage “mistake” that led to a bottle of Malört, Chicago’s own notoriously vile spirit, being poured into a wild mushroom velouté by a saboteur in the kitchen. After the soup was served, it was immediately swept up by servers, but only after the audience had a chance to take a sip of what was certainly one of the worst tastes of our day, week or even year. Other small plate offerings included a fresh herb pasta with Maryland crab and artichokes, which was clean-tasting and flavorful, if not life-changing, and a Chocolate Fantasy made with avocado-chocolate mousse and tequila-macerated mango.

Before the play began, we received an “Influencer Night Menu,” but due to the fictional circumstances beyond their control, the kitchen was unable to prepare and serve some of the listed menu items, most obviously a roast suckling pig. Honestly, while we understand that failing to prepare all the dishes was part of the scripted action, we were disappointed not to have what sounded like an excellent pork dish (realistically, of course, there’s no way a pig can be delivered right before service and be ready to go only minutes later).

Bayless and the writing team (including playwrights Carl Menninger and Amy Rubenstein, as well as Deann Bayless and Kevin Sullivan) have created a farce with the classic elements: ridiculous scenarios and characters that border on stereotypes. “A Recipe for Disaster!” also is a satire, skewering recognizable characters on the Chicago restaurant scene, including influencers and health inspectors, both of which have earned the enmity of Bayless. 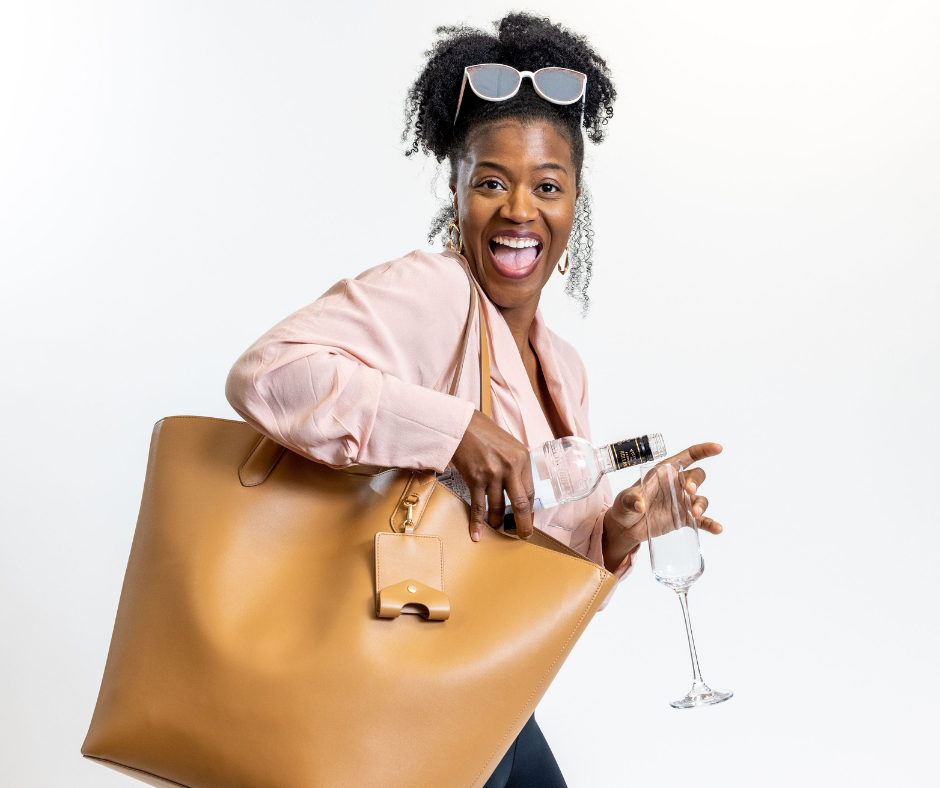 Kierra Bunch as Loreen, an influencer, in “A Recipe for Disaster”/Photo: Emily Madigan

Years ago, Bayless expressed contempt for online “food critics” and “influencers,” describing them, as I recall, as the kind of people who corner you at a party and who you really want to flee from as quickly as possible. The influencers in his play are superficial and self-important, obsessed with their number of followers, fluttering about the room as if they owned the place, stealing stuff, and, of course, snapping Instagram selfies. Ironically, the house rules for “A Recipe for Disaster” prohibit the audience from taking photos of any kind once the play begins… and several of the dreaded real-life influencers in the audience must have fought hard to restrain themselves.

Health inspectors also face dramatized barbs. The health inspector who makes a surprise visit to the fictional restaurant is portrayed as bumbling, nerdy and readily seduced by a pretty face. There are some inside jokes about the pig lacking an inspection stamp and at one point the inspector walks out of the walk-in freezer, scrutinizing a slice of bacon stuck on an instant-read thermometer. All this recalls the incident in 2009 when an “agriculture department spokesman… said the agency confiscated an 80-pound box of bacon [from a Bayless restaurant] that bore no mark of inspection.” Bayless was fined for this infraction and the bacon was destroyed.

Many members of the audience may not have noticed this incident because the play takes place all around and within the audience space, so it’s not possible to keep track of the multiple actions going on all over the room.

Playgoers at first sit in the lobby to witness the pre-dinner flurry of activity before they are ushered into the dining room of The Contumacious Pig. Inside the staged restaurant, actions unfold all around us, reflecting the controlled chaos of restaurant life, the missed orders and general confusion, as well as the demands of slightly unhinged customers and the drug-addled shenanigans reminiscent of those chronicled by Anthony Bourdain. This immersion into the madness of kitchen culture reflects the wild activities some of us have witnessed if we’ve worked in restaurants or when dining out: the front and back of the house staff, the kitchen team and the cooks, rushing about, sometimes in controlled professional frenzy, as we sit and watch and wait for our next course.

This dramatization, as with many dramas, is an exaggeration of everyday activities for entertainment purposes, and it also underscores the point that dining out is, itself, entertainment, as Lettuce Entertain You and other restaurant groups before them have understood and emphasized for a very long time.

Being immersed in the action brings home the reality of working in a restaurant more powerfully than would be possible on a traditional proscenium stage. The immersion approach of “A Recipe for Disaster” is no gimmick. The medium and the message reinforce one another: running—or even working in—a restaurant can make you crazy, and you feel that craziness, up close— and it can be quite entertaining—when you dine at The Contumacious Pig.