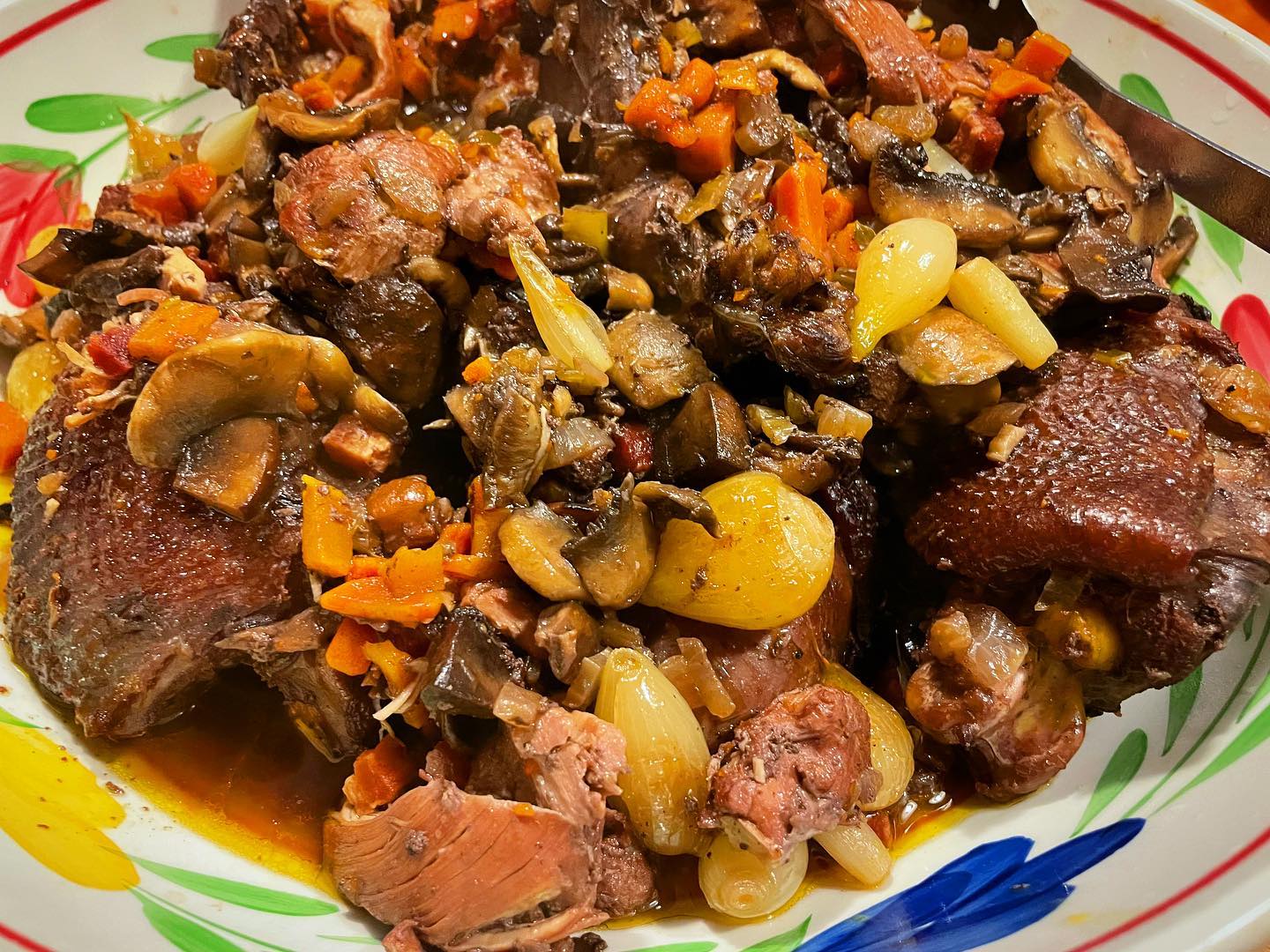 Coq au vin, literally translated, is rooster in wine. But the coq au vin served in restaurants is usually not rooster but chicken, a more readily available and tender bird. This is by no means a shocking revelation. Many of the major French cook books, like Julia Child’s Mastering the Art of French Cooking and Paul Bocuse’s French Cooking, use chickens, not roosters.

Were roosters ever used in coq au vin?

According to culinary legend, when Julius Caesar invaded Gaul (modern day France), a Gallic chieftain sent a cockerel (a young rooster, symbol of Gallic strength) to Caesar. In a show of disdain, the Roman general had the cockerel cooked in wine and sent back.

But that’s only one of many origin stories that have sprung up to explain the existence of this popular dish. The humblest, and likely most accurate explanation is that the dish was developed by European farmers who, like farmers everywhere, tend not to waste food. They needed to find a way to use the roosters which were in more abundant supply than was necessary for the continued procreation of poultry. If you make the safe assumption that roughly half of baby birds are male, and that chicken ranchers really need only one rooster to pay regular visits to the henhouse, then you know farmers are going to have a lot more roosters than they need. There was motivation to find a way to cook and consume the male birds.

Slagel seemed of eager to sell me a rooster, and for twenty bucks he offered to do a special delivery of a fresh-killed rooster to our local Carnival Grocery, where they make regular deliveries of their superb fowl. Slagel said that if others in Chicago wanted roosters, it’d be possible to special order one through Publican Quality Meats or Fresh Market Place.

We’d recently enjoyed coq au vin, made with chicken, at River Roast in Chicago. I’d chatted there with executive chef Cedric Harden, who told us that he marinated the bird for several days in red wine with a mirepoix. Harden gave us his recipe, which we combined with a recipe from the New York Times, to develop a hybrid recipe that we thought would yield the most delicious preparation.

After picking up our rooster, we cut it apart and were amazed at the dark red color of the meat, almost like beef. Taking a cue from Harden, for a marinade we chopped carrot, celery and onion into a bowl, added the cut-up chicken and a bay leaf, poured in a full bottle of Côtes du Rhône, and marinated the bird for three days.

On a Saturday morning, I removed the rooster, air-dried it in the refrigerator for five or six hours, then patted it dry to be browned. We added a cup or so of wine to the reserved marinade and reduced it to a sauce; then we put the rooster in and slowly cooked it for about two-and-one-half hours, adding a little cognac as well as mushrooms, pearl onions and lardons along the way. It smelled fantastic.

Serving it with boiled potatoes, we were appalled at the incredibly rubbery rooster meat—it was like biting into a Goodyear tire (or, as a friend suggested, a Michelin tire). The meat was largely inedible, except for the meat of the breast, which though chewable was almost devoid of flavor. The sauce was delicious, and indeed, I believe an old rooster is best deployed to make sauce or stock. 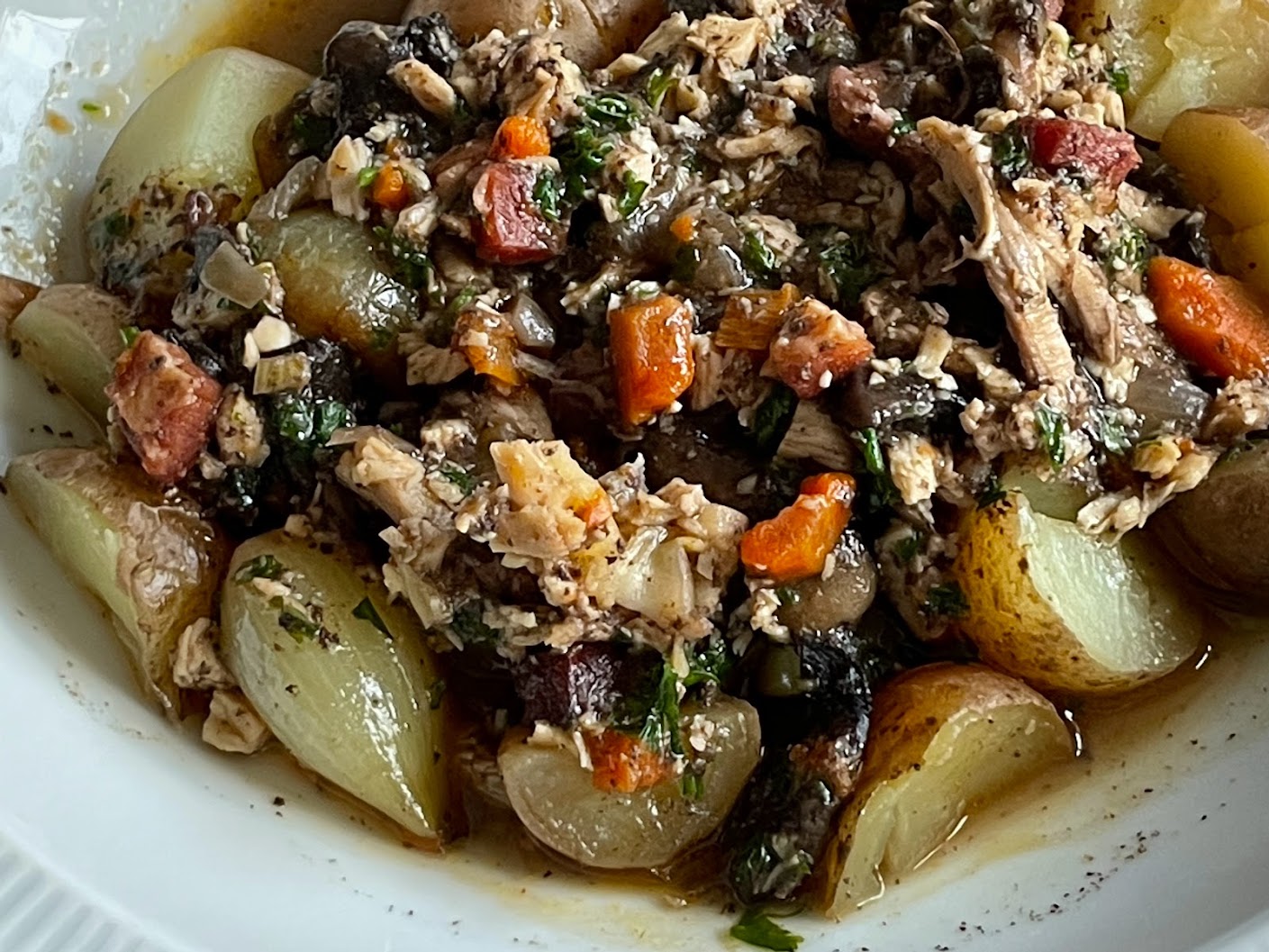 Despite the difficulty of actually chewing the meat of the rooster, we had an excellent sauce, which we used the following morning to make stovies. A dish allegedly Scottish in origin, stovies are like the Irish colcannon and the English scouse. All these dishes are potatoes with the gravy and bits of meat and vegetable left over from the night before. If you prefer a savory breakfast, mixing up potatoes with other leftovers is a good way to start the day.

Chatting with a Scottish friend of mine about stovies, he mentioned a recipe that a relation of his in Scotland used. But I believe that stovies are best enjoyed the traditional way, by chopping up whatever food is leftover and serving it over potatoes… ideally, with a delicious gravy.

We will make coq au vin again, but next time I will, like Caesar, use a cockerel; a younger rooster is likely more tender than an older rooster. John’s Live Poultry on Fullerton at Austin carries roosters. Or maybe we should just use a capon, a castrated rooster, but still a rooster, and providing a lot of good—and edible!—meat.