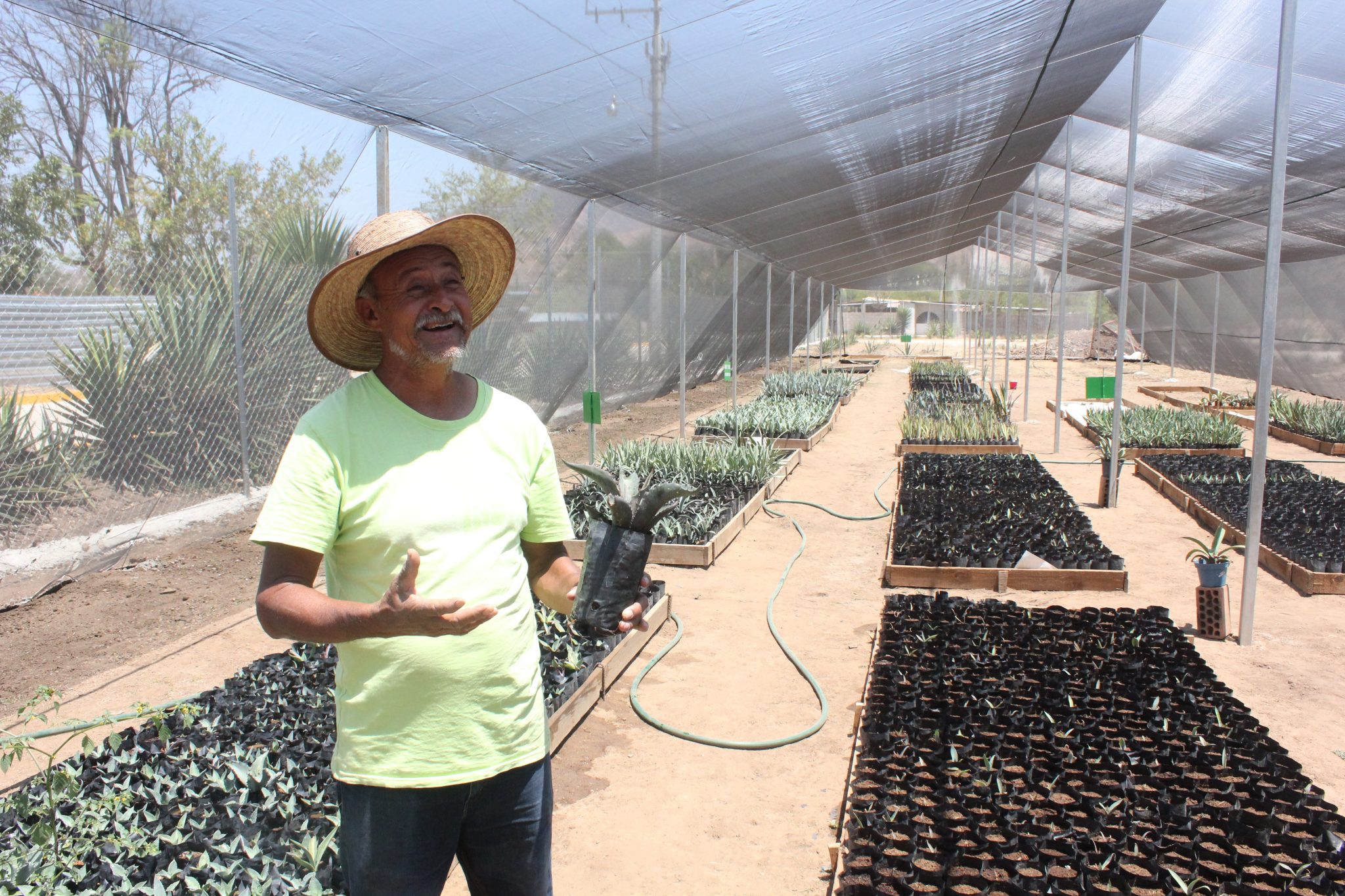 “We’re damaging the future of mezcal and other agave spirits by drinking them. We’re consuming so many spirits from Mexico, we’re creating environmental pressures that are negatively impacting the lives of people who make mezcal as well as many others in Mexico.”

Those are the words of Lou Bank, for whom I was a “mezcal mule” when I accompanied him in 2017 down to Oaxaca and brought home around forty liters of assorted mezcals from small, artisanal mezcaleros. In Oaxaca, Bank and I followed dusty back roads to small palenques where for many years, sometimes centuries, families have stoked the fires and run the stills that still produce some of the finest mezcals you will find anywhere. Mezcal has traditionally been produced at small family businesses that supply their region, or sometimes just their village, with distilled agave spirits for weddings, holidays and other celebrations, both secular and religious.

“In many regions of Mexico,” Bank tells us on his Agave Road Trip podcast, “agave spirits are integrated into the fabric of everyday life; they’re part of the religion, literally. The spirits are almost always called ‘mezcal’ locally, even though they’re not certified. The spirits are served at many of a community’s religious fiestas, so when the production of these spirits is at risk, the cultural heritage of the entire community is at risk.”

Bank started the not-for-profit S.A.C.R.E.D. (Saving Agave for Culture, Recreation, Education and Development), in part, to educate Anglos like me, as well as “gringo bartenders,” about mezcal and other distilled agave spirits. The first goal listed on the S.A.C.R.E.D. site, however, is to “help improve quality of life in rural Mexico.”  To some extent, the quality of life in rural Mexico is improved by the influx of dollars paid for mezcal produced by small artisan producers, but there’s also the issue of what producers, big and small, are doing to the ecology of the region.

One of the beauties of the mezcal produced in the villages of Mexico is that it’s made from any one of over two dozen varieties of agave, each with a flavor that comes from the plant itself as well as the environment in which those plants grow. Oaxaca, for instance, is extraordinarily biodiverse, with many different landscapes—mountains, plains, jungles—where wild agaves grow for many years, absorbing the distinctive flavor notes, the terroir, the taste of the place where the plants grow. 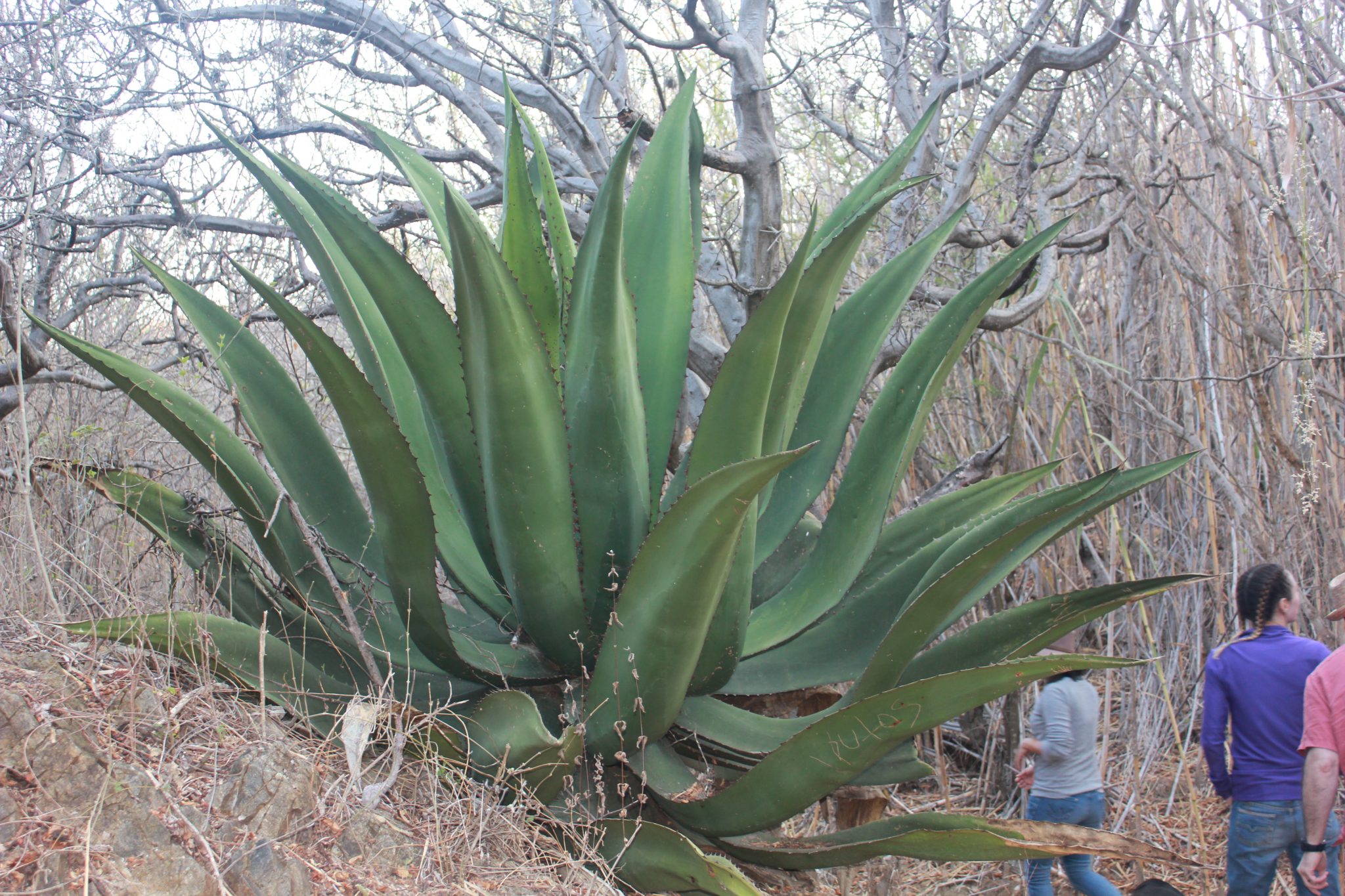 Of all the agave varieties, espadin is the one favored by many producers of mezcal, and it grows wild as well as on large agave farms.

“At least ninety-two percent of agave spirits that come from Oaxaca were made from the espadin variety of the agave plant,” Bank tells us. Especially for smaller producers, some of these espadin plants may be harvested from the wild, but as Bank says, “The problem is not that we’re harvesting wild espadin or any other type of agave. The problem is that we’re drinking so much mezcal that’s made from farmed espadin. The wild lands are being bought up in places like Oaxaca and replanted with espadin. When companies buy up wild lands, they tear out all the wild agave, the wild trees, the wild plants, kill all the wild animals, the wild insects, and destroy the waterways to service this ever-growing thirst for mezcal, the vast majority of which is made of espadin from Oaxaca.”

Though Bank champions the small, artisanal makers of mezcal, he stresses “I’m not trying to demonize the liquor companies, the multinational companies. The problem is consumers.”

So, what’s the answer?

“Well, you know,” says Bank, “I wouldn’t be egotistical enough to say that S.A.C.R.E.D. is the only answer, but I believe what we’re doing is the right answer.”

Mezcal consumption is growing rapidly. “If you look at the numbers,” says Bank, “mezcal consumption is going up thirty to forty percent every year, but that’s still only about two percent of what tequila is doing.” And tequila, though it doesn’t use espadin, is by law required to use blue Weber agave, so the bigger tequila companies are planting vast fields of blue agave, which further threatens all the other varieties of wild agave and has the same negative environmental impacts as fields of espadin that are created when wild environments, where many types of agave grow, are torn out to make way for just one type of agave.  Such actions may make economic sense, but they make for a less-diverse environment, and a diversity of plant and animal life is good for the health of the planet and everyone in it. 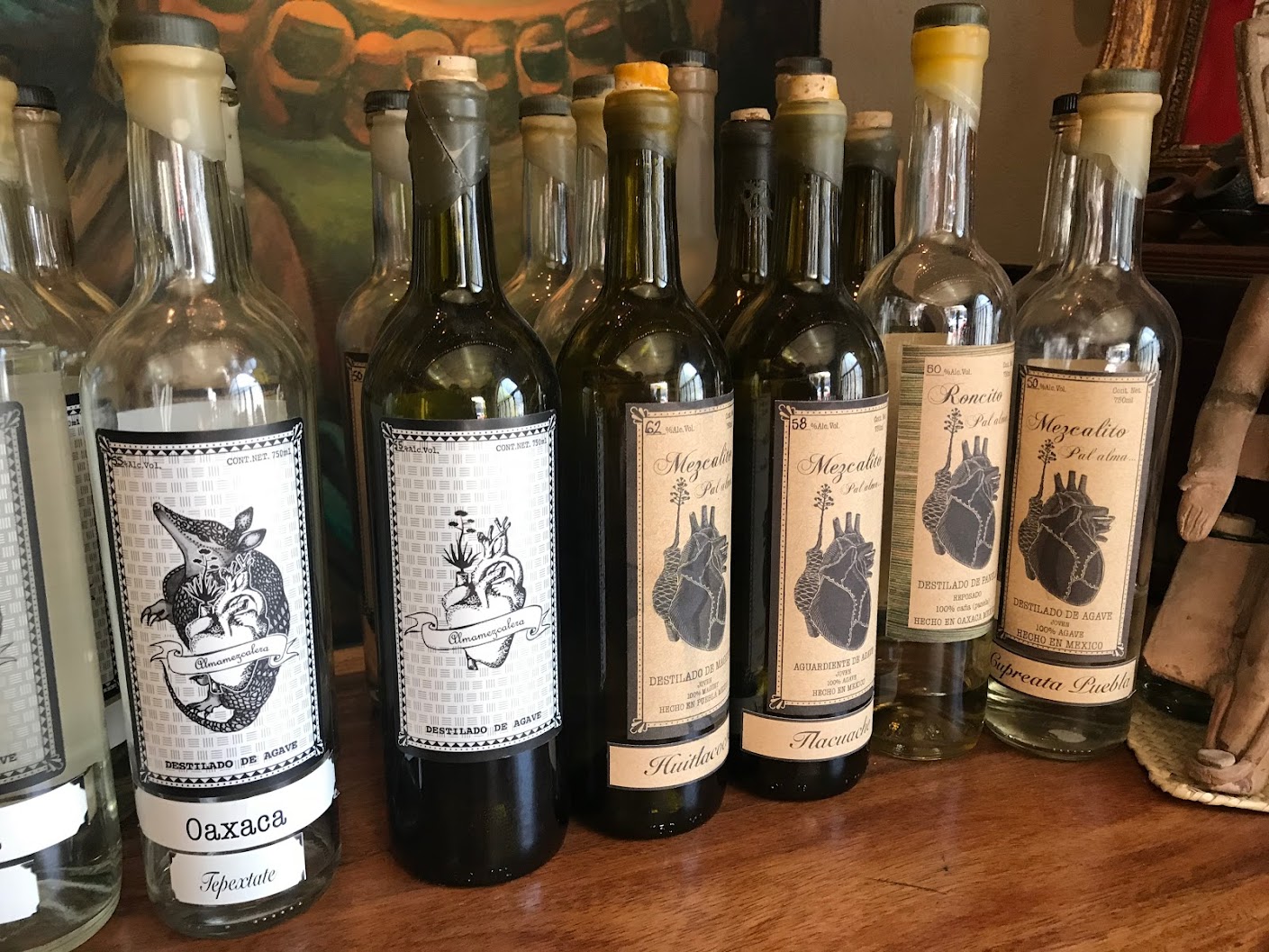 “It’s not unadulterated good news that people are drinking more agave spirits,” says Bank. “The problem remains the pressure that’s being placed on places like Santiago Matatlán,” the self-appointed World Capital of Mezcal. “They’re running out of water. It takes something like eleven or twelve liters of water for every liter of mezcal. And much of those twelve liters ends up as wastewater, and it gets thrown primarily into the water sources. The irony is that the best stewards of the water systems in and around Matalan are the industrial producers who have the better methods for readapting the wastewater into something drinkable. But they’re also the ones who are most guilty of tearing out the wild land to make room for farms.”

So, what is S.A.C.R.E.D. doing to help rural Mexicans get the water they need while slowing the steadily more monocultural landscape? Bank is juggling projects, but to address the water problem, S.A.C.R.E.D. is building a rain-harvest system at an elementary school and another for the 500 rural residents of rural Oaxaca. To help replace wild agave plants that are being uprooted for the farming of espadin and other agricultural products, S.A.C.R.E.D. purchased and distributed over 50,000 agave seedlings to families who were having a tough time accessing the source material of their cultural heritage. They also funded the building of two greenhouses in rural Jalisco for the preservation of four varieties of at-risk agaves. S.A.C.R.E.D. also rescued almost a hundred rare arroqueno agaves that were set to be destroyed so a more seasonal crop could be grown in their place, and they reproduced and distributed 700 seedlings to ensure the agave’s longevity as well as the continued biodiversity of our planet and, of course, the continued production of mezcal. 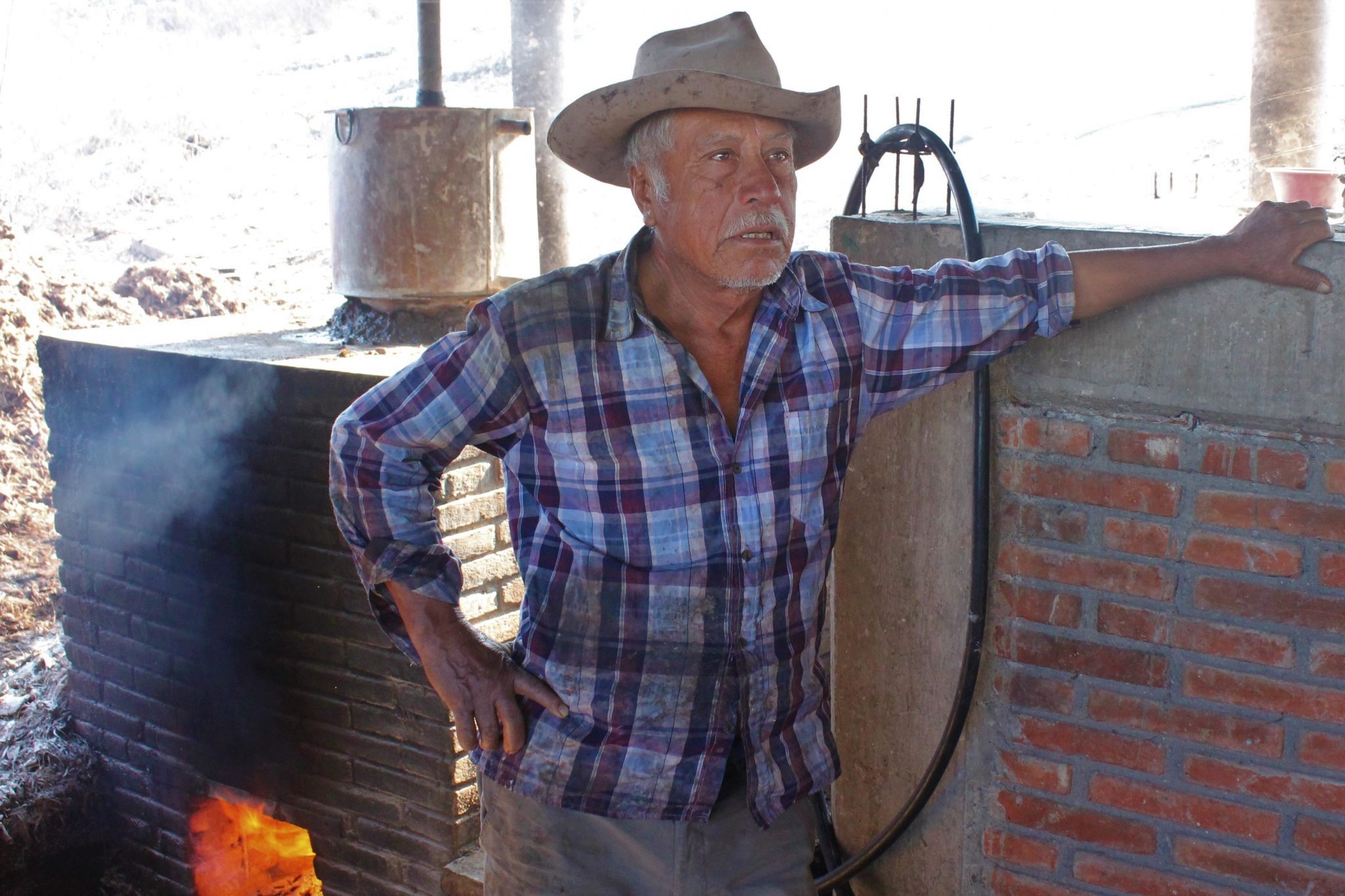 Having water systems in place, and a supply of agave seedlings coming in, small mezcal producers can continue to practice their trade, giving us the spirit we love while avoiding some of the environmental negatives and positively impacting the rural life in Mexico. It’s possible to be a conscious consumer of mezcal, and it’s also possible, as S.A.C.R.E.D. explains, to “Drink Well, Do Good.”

The pandemic hit hard the small communities that had relied on the economic boost from tourism and the sale of distilled agave spirits. Many of these small producers have an excess inventory of spirits produced in anticipation of selling them to visiting tourists—but because of the pandemic, tourism went way down. So, if you like agave spirits, and want to give small producers a chance to survive, Bank’s S.A.C.R.E.D. is supporting a mechanism for buying “futures”: you pay for the spirits now and then pick them up when you feel it’s safe to return to Mexico. Payment for these purchases are made directly to the producers themselves. S.A.C.R.E.D. itself does not take payments; the organization is simply facilitating the connection between you and the people who make Mexico’s signature spirit.

Find out more about purchasing futures of distilled agave spirits—and supporting the rural Mexican producers of this spirit—at the S.A.C.R.E.D. site.