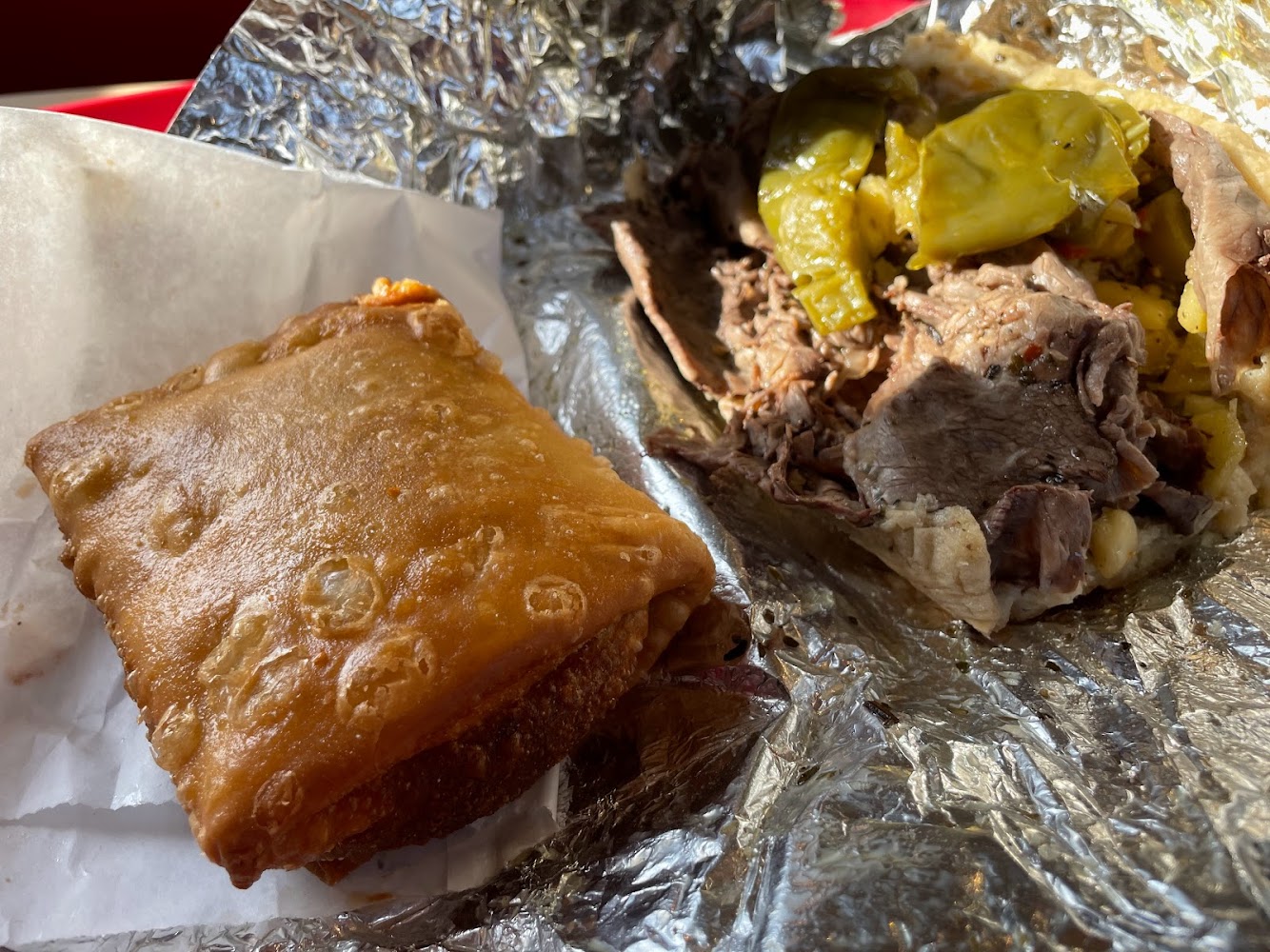 A Late-in-Life Romance with Puffs

Late last year, I had my first pizza puff. I realize that may be hard to believe, and it’s all my fault: I had for years mistakenly thought that pizza puffs were the same as pizza rolls. They are not.

What motivated me to sample pizza puffs was that Axios reporter Monica Eng and I have finished a book entitled “Made in Chicago: Stories Behind 30 Great Hometown Bites” (University of Illinois Press, due March 2023). We cover the usual Chicago favorites like Italian beef, hot dogs and deep dish pizza, but also lesser-known Chicago culinary creations like the Mother-in-Law, the Big Baby and… The pizza puff.

At our local Mr. Beef on Harlem in Forest Park (oddly unrelated to the legendary Mr. Beef on Orleans), I picked up a classic pizza puff to go along with my Italian beef. I loved it. The fried shell was folded around the usual pizza toppings (sauce, sausage and cheese), and it was a much more satisfying side-bite than, say, a Chicago corn roll tamale.

As Eng points out in soon-to-be published “Made in Chicago,” while “the pizza puff is sold in thirty-eight states, about half of all puffs are eaten in the Chicago area.”

This statement of Eng’s points to a problem with determining the origin of dishes. A food item might be developed in one part of the country, but if that food becomes untethered from its past, some jamoke from, say, New Jersey, who as a kid had pizza puffs at his local hot dog stand, might jump to the conclusion that pizza puffs were invented in the Garden State. I ran into a similar issue a few weeks ago when in my article entitled “Road Tripping: Nine Classic Foods of New Mexico,” I listed the Frito pie as a New Mexico food. This elicited from John Mariani (former Esquire food critic) the observation that “Frito Pie was created in Texas (Fritos were first sold in San Antonio as of 1932), dating at least to a ‘Fredericksburg Home Kitchen Cook Book’ in 1946.” That could very well be the most accurate origin story for Frito pie, though other sources are less certain of that conclusion. My point: determining the origin of a dish is sometimes difficult.

On Beyond Pizza: Let’s Just Call Them “Puffs”

The birth and genesis of the pizza puff—or, simply, the “puff”—however, is well-documented. And referring to them as puffs makes sense in that now the fillings for the puff have evolved beyond pizza.

Elisha Shabaz, an Assyrian immigrant to Chicago, opened Illinois Tamale Company in 1927. The tamales he sold were much like the Supreme and Tom Tom Tamales you buy at places like Gene & Jude’s. In fact, Shabaz created his tamales specifically for hot dog vendors because sometimes customers are just not in the mood to eat a hot dog.

Shabaz started the Illinois Tamale Company to make tamales, and in 1964, his grandson Warren assumed leadership of the company and renamed it Il-Ta-Co (Iltaco) Foods Company. In 1976, the pizza puff was introduced and in 1978, the beef puff was introduced, followed by the ham-and-cheese puff and the taco puff. 1987 was a big year, with the introduction of even more new puffs: four-cheese, spinach & cheese and Deluxe puffs. In the past decade, Iltaco introduced puffs of gyros, breakfast sausage, pulled pork, buffalo chicken and Reuben. Clearly, puffs are popular and infinitely variable.

Warren could have taken the route of the calzone and panzerotti and started with raw dough to make each crust, but Chicago, land of many fine tortillerias, offered him the option of simply using a flour tortilla, a mass-produced and consistent product.

As a newly minted fan of puffs, I decided I’d make my own, not in imitation of anything from Iltaco, but just to see how it would turn out (puffs have the potential for being an excellent pre-dinner party nibble). 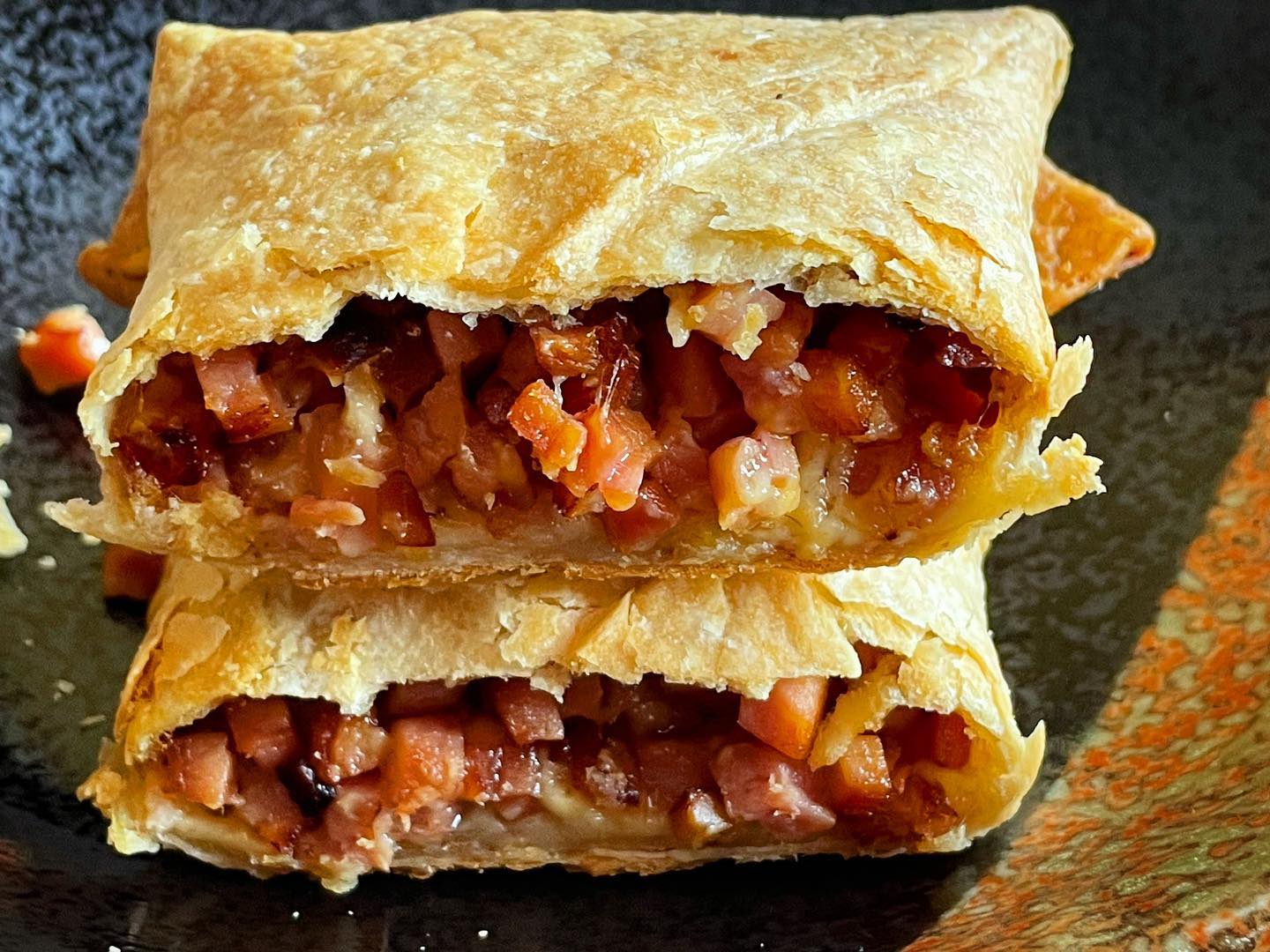 The recipe is almost too simple to write down.

To start, I bought a bag of flour tortillas, a round of Mexican queso fresco, and from McCullough Kelly-Willis’ Chicago Meat Collective. some outstanding chorizo. We decided to highlight Mexican flavors, and, indeed, the puff seems a variation on the gordita, a stuffed corn roll disc (instead of a flour tortilla), fried; the chimichanga, a deep-fried burrito (very much like a puff, though oblong); or even the hot pocket, which according to the box is designed to be microwaved but can also be baked. Unlike the gordita, the puff uses a flour tortilla; unlike the chimichanga, the puff is square-shaped; and unlike the hot pocket, the puff is usually fried rather than microwaved or baked (although we’re coming to prefer baked).

We folded the tortilla around the cheese and browned meat, added a dash of salsa, and wiped water along the edges of the tortilla to hold it together—friend and chef Jonathan Zaragoza suggested a mixture of water and flour, which works very well to paste together the folded tortilla.

Puffs can be deep-fried, air-fried, baked, microwaved or grilled. We decided to deep-fry our first puffs. We determined that the best way to proceed is to lay the puff, folded-side down, in a pan with about an inch of hot oil, turned after three minutes or so to brown both sides.

Baking is a good alternative to frying, and as you’re simply placing the puffs on a baking sheet, there’s less chance they will fall apart while cooking (which is a risk you take when you drop the puff into a fryer). If you’re going for the healthier alternative of baking your puff, we suggest brushing it with oil before putting it in the oven. Our baked puffs were far less greasy and even crunchier than our fried puffs; overall, baking might be the best way to go with these Chicago original foods (frying requires a lot of oil and it makes quite the mess).

Our puffs were simply delicious. And I like the idea of serving a chef-fy rendition of a down-market snack for get-togethers with family and friends who, I would not be surprised, have probably never had a puff… And they really should.

Like so many dishes, it comes down to using high-quality ingredients, and with them, the puff becomes a thing of beauty, a warm pillow of deliciousness and an invitation to try different fillings. Next up, we’re considering a Chinese puff with anise-seasoned pork and bean sprouts, a Ukrainian puff with chicken Kyiv, or maybe a Spanish version with jamon iberico and manchego cheese. With a puff, the possibilities are endless.

So, I send out this call across the land (o’ Lincoln): It is high time for the puff to join with the traditional Chicago food triumvirate of Italian beef, hot dogs and deep dish pizza, and be recognized as one of the illustrious original foods invented in our city!