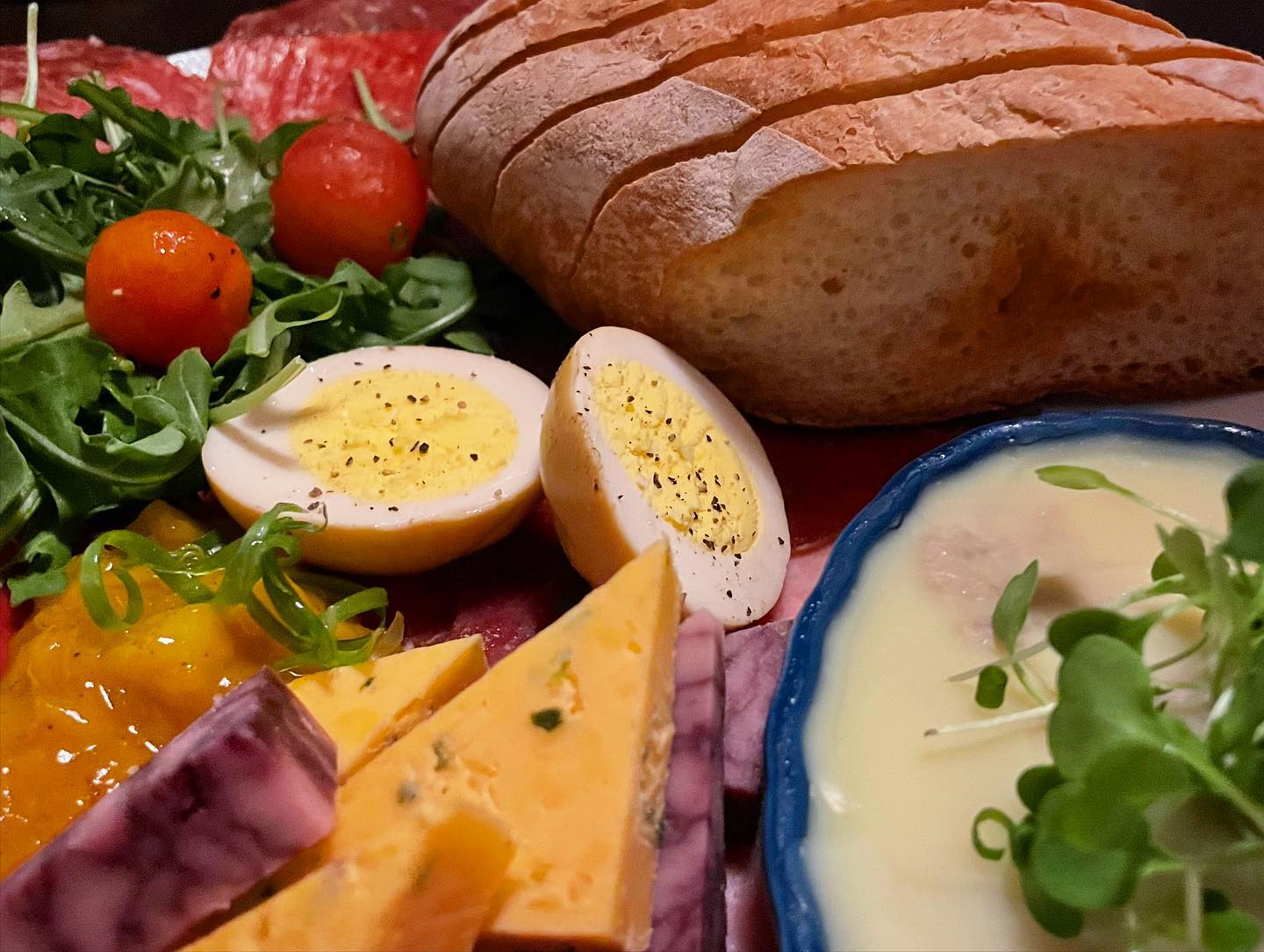 The Albion Manor opened just a few weeks ago, and it’s billing itself as “a warm and welcoming English pub airing international sports on the telly, particularly footy (otherwise known as soccer).” This is the most recent restaurant from the husband-wife team of Julia Shell Hale and Jamie Hale, who also brought to Chicago AJ Hudson’s Public House and The Dandy Crown.

One glance at The Albion menu and I spotted two items I knew I wanted: The Ploughman’s Plate and Spotted Dick.

Sometimes called a Ploughman’s (or Plowman’s) Lunch, the Ploughman’s Plate at The Albion is a platter of meat (sausage and pâté), cheese, pickled egg, marinated tomato, chutney and a hunk of baguette, all of which can be enjoyed with the hands. There’s also a meatless vegetarian edition with hummus and broccolini, though that version may require a knife and fork.

The Ploughman’s Plate is thought to date back to ye olde tymes when those who went forth in the early morning to plow the fields stuffed in their pockets some cold foods to be eaten at lunchtime, a workingman’s picnic.

British Grub Hub (unrelated to the third-party delivery service) tells us that “The Ploughman’s Lunch (or more simply a Ploughman’s)  was created by British farmers back in the day. It’s a cold lunch that’s very traditional.”

This reading of history is buttressed by an early nineteenth-century reference to a “ploughman’s lunch” in Sir Walter Scott’s memoirs. Scott did not, however, specify what this lunch consisted of, leaving open the criticism that Scott was simply referring to whatever the plowman was having for lunch that day.

At the end of World War II, when wartime rationing came to an end, there was a lot of government cheese available, and an ad agency was hired to popularize the Ploughman’s Plate… and increase cheese sales. The term Ploughman’s Lunch was a concept pushed by the English Cheese Bureau in 1957.

Whatever the origins, there is no doubt that Ploughman’s Plate is a favorite meal in English pubs, which plays against the traditional positioning of the meal as something someone carried on their persons and then ate in the fields during a hard-working day. At posh British pubs, or gastropubs, the pickled egg might be replaced by a Scotch egg, and at The Albion, there’s a beautiful little chicken pâté prepared by Chef Mark Hill, which he pointed out was traditionally not served cold and which has a top-crust of butter that would preserve it and keep it tasting good even without refrigeration.

Although like the more generally recognized charcuterie plate, the Ploughman’s Plate can include a great many things, Hill believes that “to be called a Ploughman’s Plate, it must include bread, meat and cheese, so that you could make a sandwich of sorts.

“What I love about pub food,” continues Hill, “is the simplicity, and it’s meant to be shared, because the pub experience is communal.”

The Albion’s version of the Ploughman’s Plate was an excellent starter, colorful and appetite-perking. There are some excellent mixed drinks, prepared under the guidance of beverage director Sarah Syman, Star Chefs 2021 Rising Star. We opted to have a cocktail after rather than with dinner, because with the Ploughman’s Plate and other English specialties, ale or beer just seem the best possible pairing. 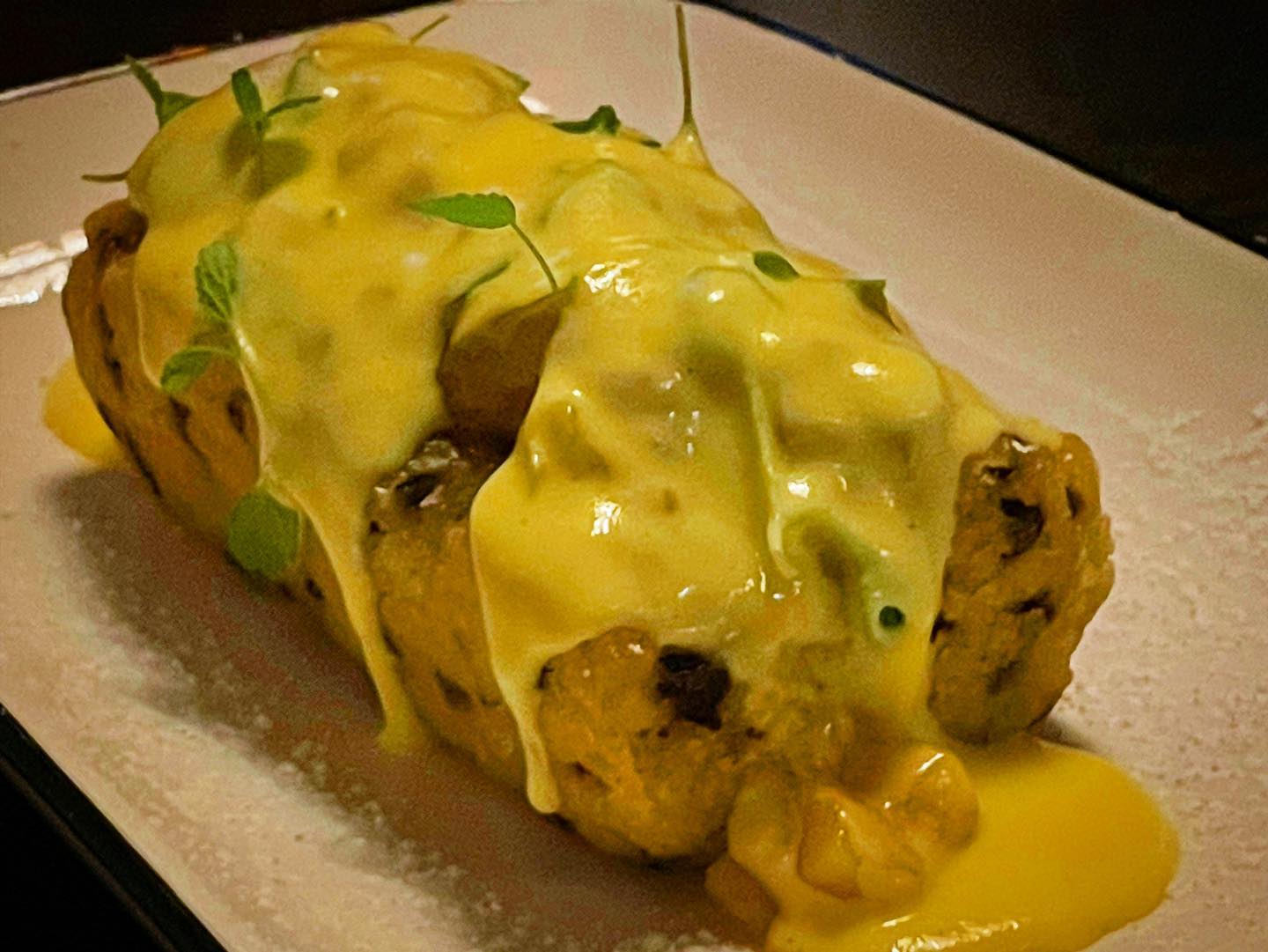 Spotted Dick is a menu item that has launched a billion awkward jests that servers everywhere in the English-speaking world must endure with a tortured smile as they patiently take the order.

We’ve had Spotted Dick in England, and the version at The Albion was somewhat more crafted than what we’ve had in the homeland of the sweet.

Okay, but what is a Spotted Dick dessert?

Spotted Dick, also called Spotted Dog or Railway Cake, is a steamed pudding with raisins or currants (thus, spots). The first recorded use of the term Spotted Dick was in the mid-nineteenth century. A pudding, in the English sense of the term, is nothing like the American Jell-O product; rather, it’s a sweet or savory cake-like treat that starts out as a liquid that sets when it is subjected to steam heat. The resulting cake is medium-weight and very moist.

It’s been speculated that the “dick” in Spotted Dick comes from the shortened Old English names for pudding: puddog or puddick. In Scotland it is often called Spotted Dog Pudding.

Like the Ploughman’s Plate, Spotted Dick is not an extravagant food, but instead the simple stuff you’d expect to find in pubs. At The Albion, Chef Hill adds a healthy pour of crème anglaise to the Spotted Dick, which makes for a richer, and more interesting-looking after-dinner sweet.

In the car on the way home from The Albion, we went by a restaurant called The Hat, which specializes in Chicago food, including Italian beef and Maxwell Street Polish, but also serving lesser-known Chicago-origin foods like The Mother-in-Law and The Big Baby. For those looking for foods invented here, you can now stop at a single place to get a taste of many different foods that were first served in our city.

Similarly, The Albion is a kind of edible encyclopedia of English pub foods. In addition to the Ploughman’s Plate and Spotted Dick, there’s Yorkshire pudding with gravy, fish-and-chips and curry fries; not a representation of all the pub foods of England, but a very good place to start. Hill has plans to include other traditional pub foods like bangers and mash, as well as steak-and-ale pie, which he tells us uses “short rib, which is more tender than steak, and is meant to be shared by the table,” and communal eating and good times is a big part of the pub experience, whether in Britain or Chicago.