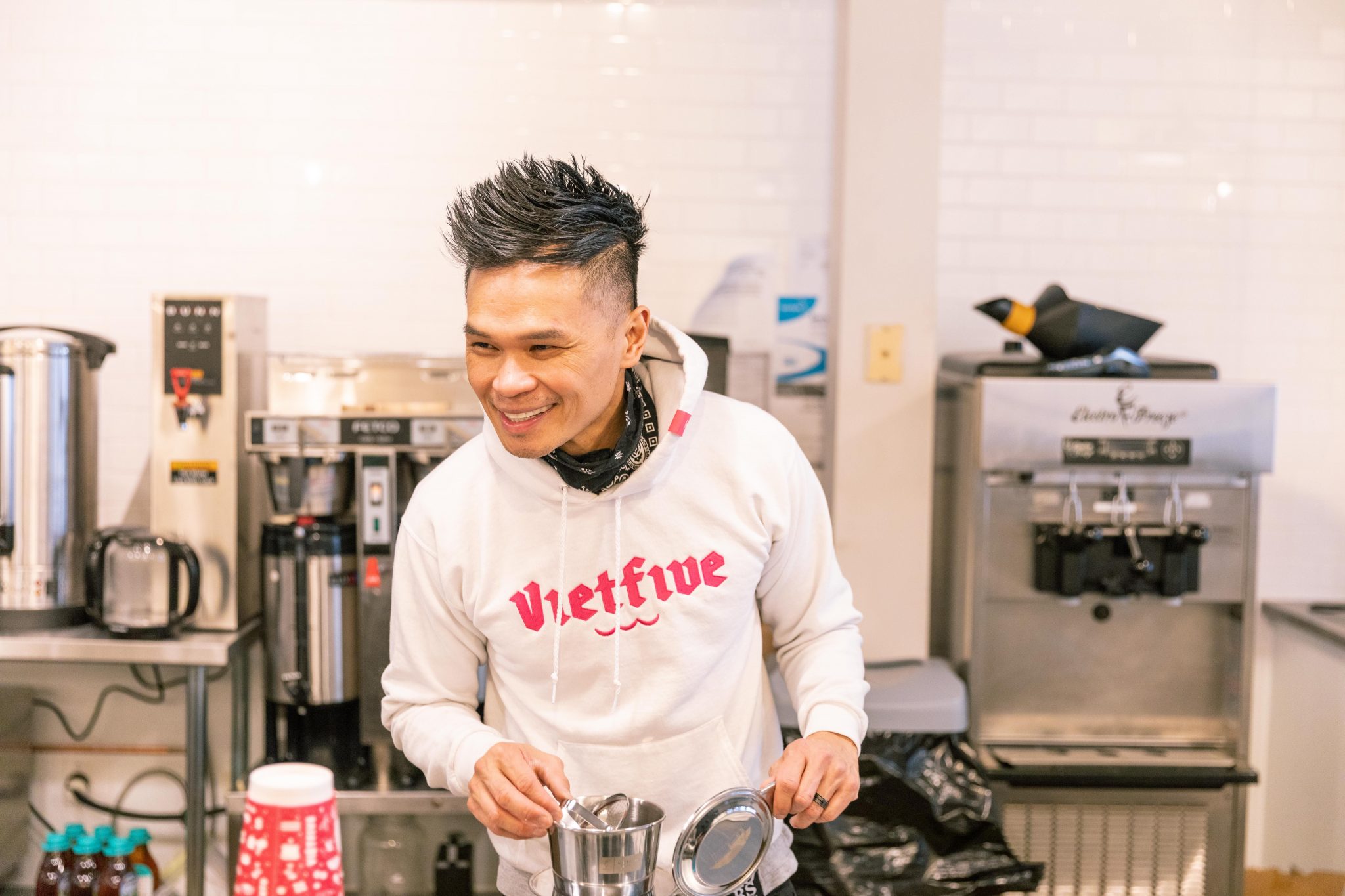 Coffee has been part of Tuan Huynh’s family story for decades. Huynh tasted true Vietnamese coffee in 2019, when he visited his homeland for the first time since he was three and had fled the country as a refugee. With that first taste, though, he set out on a mission to bring true Vietnamese coffee to the United States.

The mission was twofold.

“I wanted to share our story, our journey,” Huynh says. “As Vietnamese refugees, we’re almost a transient culture. People are confused about who we are, so through storytelling and brands and products, people get clarity on what Vietnamese culture actually is.”

The other half of the mission was about the coffee itself. Huynh was frustrated that in the United States, what is served as Vietnamese coffee is often simply coffee with condensed milk and ice. There’s more to true Vietnamese coffee than that.

Huynh’s family was displaced to the central highlands of Vietnam in 1975, where they started to grow robusta beans on the volcanic red soil of Buôn Ma Thuot. His father was imprisoned for five years, after which the family went by sea to Malaysia and eventually to the United States. VietFive is named in honor of the five members of Huynh’s immediate family.

After traveling back to Vietnam, Huynh knew he wanted to start importing Vietnamese coffee. He did pop-ups around Chicago, where he lives, as well as California, which has a large Vietnamese population, and Kansas, where his parents live. He partnered with friends who own restaurants to “spread the good word of coffee,” and signed a lease in the West Loop in October 2019. VietFive opened in March of this year.

Vietnam is the largest robusta producer in the world. Huynh’s coffee is made with one-hundred percent robusta coffee grown on his family’s farm in Buôn Ma Thuot. The beans are hand-picked, washed, and sun-dried before they are shipped to Chicago, where Huynh works with local roasters. Robusta has about twice as much caffeine as Arabica coffee. It’s a durable crop that does well in adverse climates and volcanic soil, and it has a nutty, chocolate, chicory flavor. 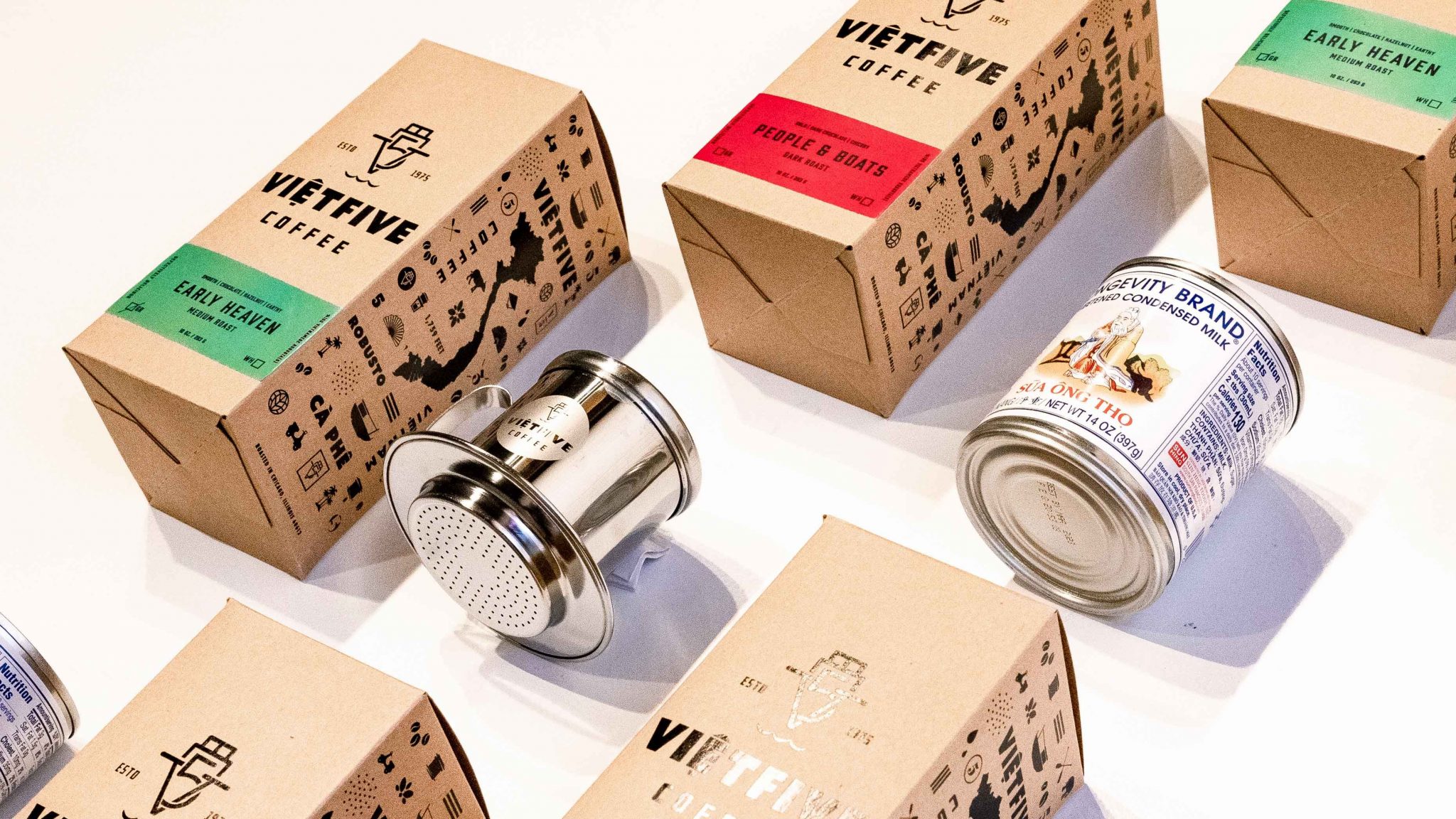 VietFive has a light roast called Sacred Waters, a medium roast called Early Heaven, and dark roast called People & Boats, all tailored to taste like the roasted coffee in Vietnam.

Most coffee drinks at VietFive are made with the medium roast, finely ground, and put through a Phin coffee filter, a Vietnamese device with a base, chamber, weighter and top. Imagine a hybrid between a French press and pour over. “We always make time for a bloom,” Huynh says. The bloom—which involves pouring a small amount of boiling water over coffee grounds and allowing it to sit for about thirty seconds—enables more extraction of flavor from the beans. After the bloom, VietFive employees fill water to the top and let it drip before adding condensed milk and ice.

Formerly an art director at Leo Burnett, Huynh is a natural at telling his story and marketing the brand. In just two months, he’s seen interest in opening VietFive stores in Kansas, New York and Texas. But there have been difficulties. “The permitting, contracting and legality of the process was so challenging for me to figure out,” he says. “The operational part was a total learning curve. I built the whole thing as it was flying, because I knew there was demand, and we were the first in the city of Chicago to offer farm-to-cup Vietnamese robusta coffee.”

VietFive is not Huynh’s first time with start-ups. He’s also the founder of Chicago Peace, a non-profit that aims to bring “positive, collaborative and sustainable change to Chicago neighborhoods in need of revitalization.” This initiative was inspired partly by Huynh’s own time in prison; he killed a man, he says accidentally, when he was young and, he would readily agree, lost; he succeeded in dramatically turning his life around, and would now like to help others do the same.

So, it seems natural then that VietFive is a community space as well as a coffee shop. Huynh plans to host lectures on NFTs and other educational programs this summer. From May 13-15 and May 20-22, VietFive partnered with Chicago Bucket List on Asian Heritage Month, which featured events including live performances, music, painting from local artists, and special menu items like the Boat Float, a Vietnamese coffee float.

Now that his business is open, the city has welcomed him with open arms, something he’s grateful for, especially in an industry often crowded with pretension.

“In a space so flooded with coffee shops and coffee snobs and all these big companies, here we are as local farmers in the central highlands trying to step into a space we’re well deserving of, but people haven’t heard what we’re doing,” he says. “Chicago is the best city in the world to do something like this because of the communal atmosphere and Vietnamese population. I’ve been energized by that.”