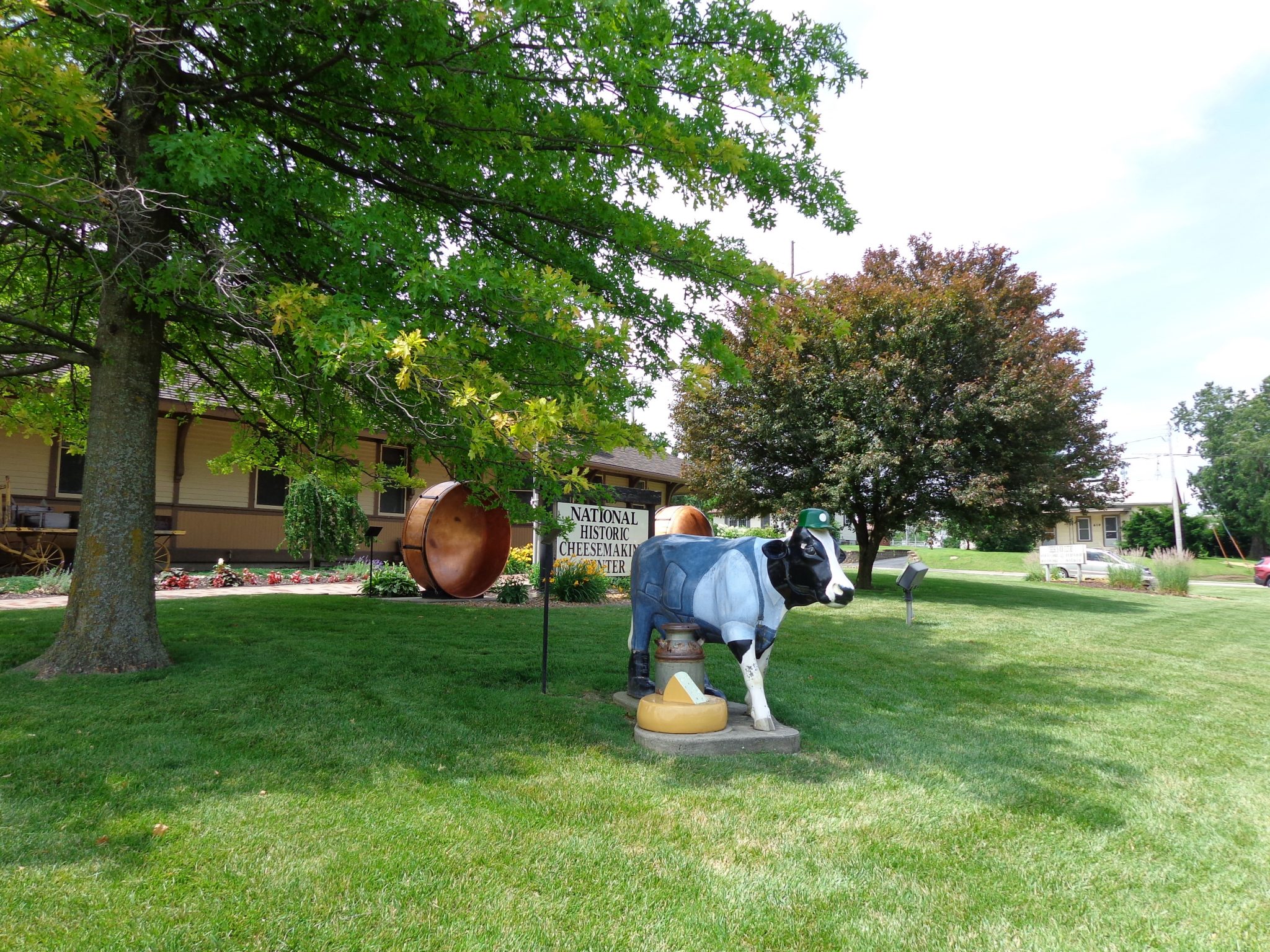 Wisconsin means dairy. It’s called “The Dairy State,” with a wheel of cheese and a cow on the twenty-five-cent piece dedicated to the state. Roughly one-quarter of all dairy farms in the United States are in Wisconsin. But even here, there are cheese destinations that stand out—and one standout cheese-centric location is Monroe.

Monroe, the county seat of Green County, is the “Swiss Cheese Capital of the USA,” and cheese, along with Swiss culture, permeates the town. You can almost hear yodeling.

My first visit to Monroe was while I was researching my recent book, “Destination Heartland: A Guide to Discovering the Midwest’s Remarkable Past.” The first place I wanted to visit was the National Historic Cheesemaking Center, worthwhile for its displays of both cheesemaking and cheese marketing. But this was just the beginning.

Many towns across the Midwest have Turner Halls, German gymnastics clubs, but Monroe is believed to have the last Swiss Turner Hall. This was the second destination on my must-hit list. As with other Turner Halls, in addition to gymnastics, this handsome community center offers a theater, bowling and a restaurant, the Ratskeller (not Rathskeller—that would be German-German; this is Swiss German). As I was in the Swiss Cheese capital, I opted for the Swiss Cheese Pie. (And they kindly gave me the recipe for inclusion in my book, should you be curious.) I was enthusiastically informed by my guide that I must return for the Kalberwurst sandwich. Last week, I was back in Monroe, and I followed up on my promise to take her recommendation.

The Kalberwurst itself is a veal sausage that originated in Glarus, Switzerland. It was served smothered with caramelized onions and melted Swiss cheese. And seriously, could anything treated that way not be tasty? It was served on a bun with a small pot of gnarly, slightly sweet mustard. I had arranged to meet up with my guide from the previous trip, so she could join me for my introduction to her favorite sandwich, and she was gratified by my reaction. Be advised, if you’re planning a trip: as elsewhere, some venues in Monroe, including the Ratskeller, are struggling with staffing issues. So, call ahead to find out if it’s open. But if it’s not, don’t worry: this is far from the only place in town to indulge in cheesy goodness.

A broad, open square in the center of town is home to the imposing Green County Courthouse (open to the public), as well as to the charmingly rustic Baumgartner’s Cheese Store and Tavern, the oldest cheese store in Wisconsin. Baumgartner’s didn’t start out selling cheese. In 1931, Emil Baumgartner began a business selling equipment for cheese makers. When hard times struck, he accepted cheese as payment, which led to serving cheese sandwiches and, in time, to selling cheese. While one can stock up on local offerings (more than two dozen varieties), one can also have lunch, with the Limburger sandwich (cheese and onion on rye) being the classic. 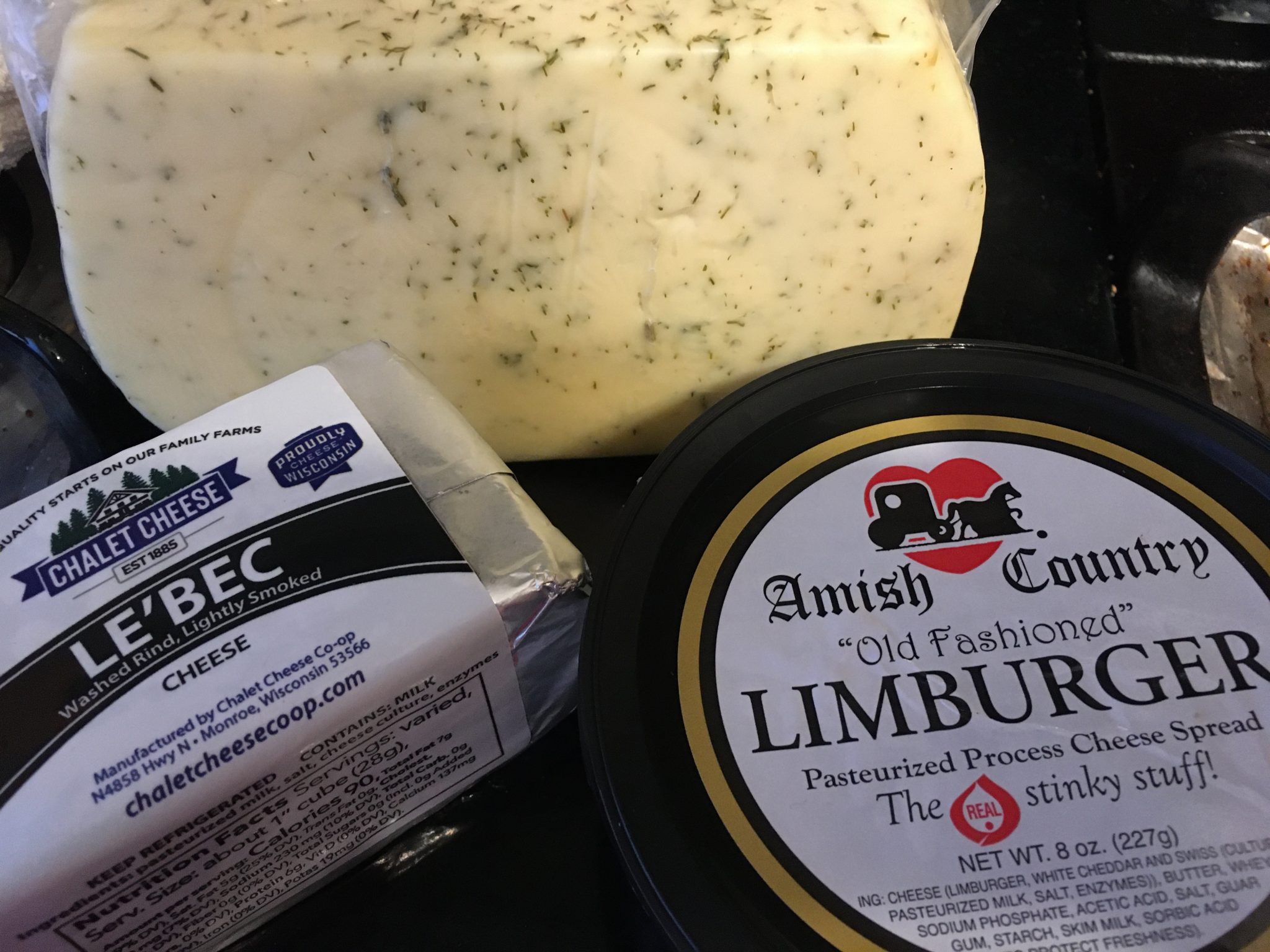 Monroe is the last place in the United States that makes Limburger, the famously fragrant cheese. Drive a few miles through the rolling, green countryside, and you’ll come to the Chalet Cheese Co-operative, the last remaining source. The factory, pristinely white and perched on a hill overlooking the surrounding farms, has a store where you can stock up on this and other offerings. Of course, there is a history. Nickolaus Gerber, who arrived in Green County in 1868, established the first Limburger factory here. Limburger (invented in Belgium, in the Duchy of Limburg) was a popular working man’s cheese, and other Swiss and German immigrants were soon producing it. However, this cheese was so closely associated with beer (and a stein will certainly help the odoriferous cheese go down), that sales were devastated during Prohibition. Only the Chalet Cheese Co-op soldiered on.

The co-op uses milk from the twenty-one member families (ninety-five percent of all Wisconsin dairy farms are family-owned), so the cheesemakers know exactly what they’ll be getting, with milk coming from Holstein (seventy percent) and Brown Swiss (thirty percent) cows. The tidy shelves in their spartan shop offer mild, medium and aged (aka strong) Limburger, Limburger spread, and Le’Bec, a washed-rind, lightly smoked Limburger. Also on offer are dill Havarti, Brick (invented in the U.S. by Swiss cheesemaker John Jossi), Pannaro (described as a Gouda and Parmesan blend) and, of course, Swiss in multiple forms. I’d brought a small cooler with me, so I won’t need to buy cheese for a while.

If you’d like to purchase Limburger in Chicago, Greg O’Neill (formerly of the legendary Pastoral cheese shops) says a sure place to find it would be at Gene’s Sausage Shop. Yolanda Luszcz, one of the owners of Gene’s, tells us she is all out at the moment, but that “people love it; it goes pretty fast,” adding “the powerful smell does not align with the flavor, which is soft and buttery.”

Want to taste some for yourself? If you’re not busy September 16–18, Monroe celebrates Cheese Days, a food festival that lays claim to being the oldest food festival in the Midwest. More cheese, please!

Being a native of Green County, having grown up on a dairy farm outside of Monticello, 11 miles away from Monroe, and having worked during my college years at the Chalet Cheese Co-Op, this is an accurate description of the community and culture. Cheese sandwiches are still one of my favorite foods! Badger Doug.

Thanks, Doug. I imagine it was a lovely place to grow up. Beautiful area. Nice people. Great cheese.

He is right on with it and I love it as well I’ve been all over the US and still here I am Minroe, WI. From the age of 14 to now 38 and my own family. Thank you Cynthia. Monroe,WI we’ll bring you back!.

Thank you, Dugan. It won’t take much to lure me back to Monroe. 🙂 Maybe I’ll make it for Cheese Days this year. (I’ve written books on Corn and on Pigs/Pork — maybe Cheese should be next.)