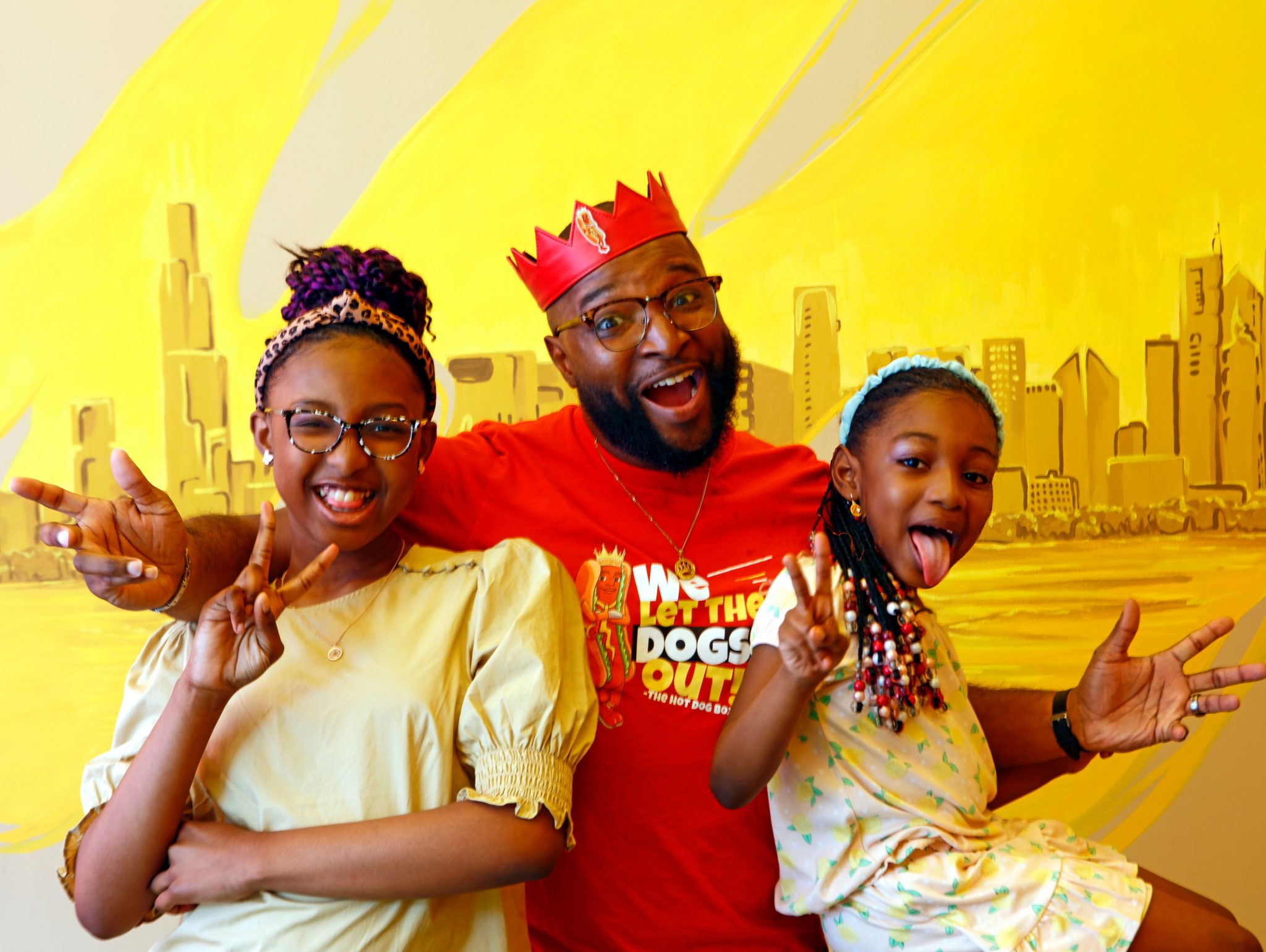 Is there anything Bobby Morelli won’t put on a hot dog? Before you answer, consider that marshmallows, breakfast cereal, piña colada sauce and toasted coconut sprinkles are already on his ingredient list, with more eclecticism yet to come.

It’s been two years since Morelli, self-proclaimed “Sausage King” of Bronzeville, launched The Hot Dog Box, a gourmet hot dog business specializing in four-ounce steak dogs layered with everything but the kitchen sink. Originally operated out of a shipping container with Morelli’s then-nine-year-old daughter, Brooklyn, at the cash register, the business relocated to a brick-and-mortar location in Portage Park this past January.

Right now, the flashy poster in the front window of the Milwaukee Avenue shop highlights “The Millionaire Frank & Beans,” part of Morelli’s new, five-dog “We Let the Dogs Out” summer sausage series. An upmarket take on the canned-bean classic, the steak dog comes with arugula sprouts, a honey champagne mustard sauce, wood-fired garlic baked beans, bacon crumbles and an edible one-hundred-dollar-bill wafer. There’s also the Piña Colada dog, with a pineapple spear and toasted coconut sprinkles. Other yet-to-be-revealed dogs in the series will likewise be elaborately festooned. 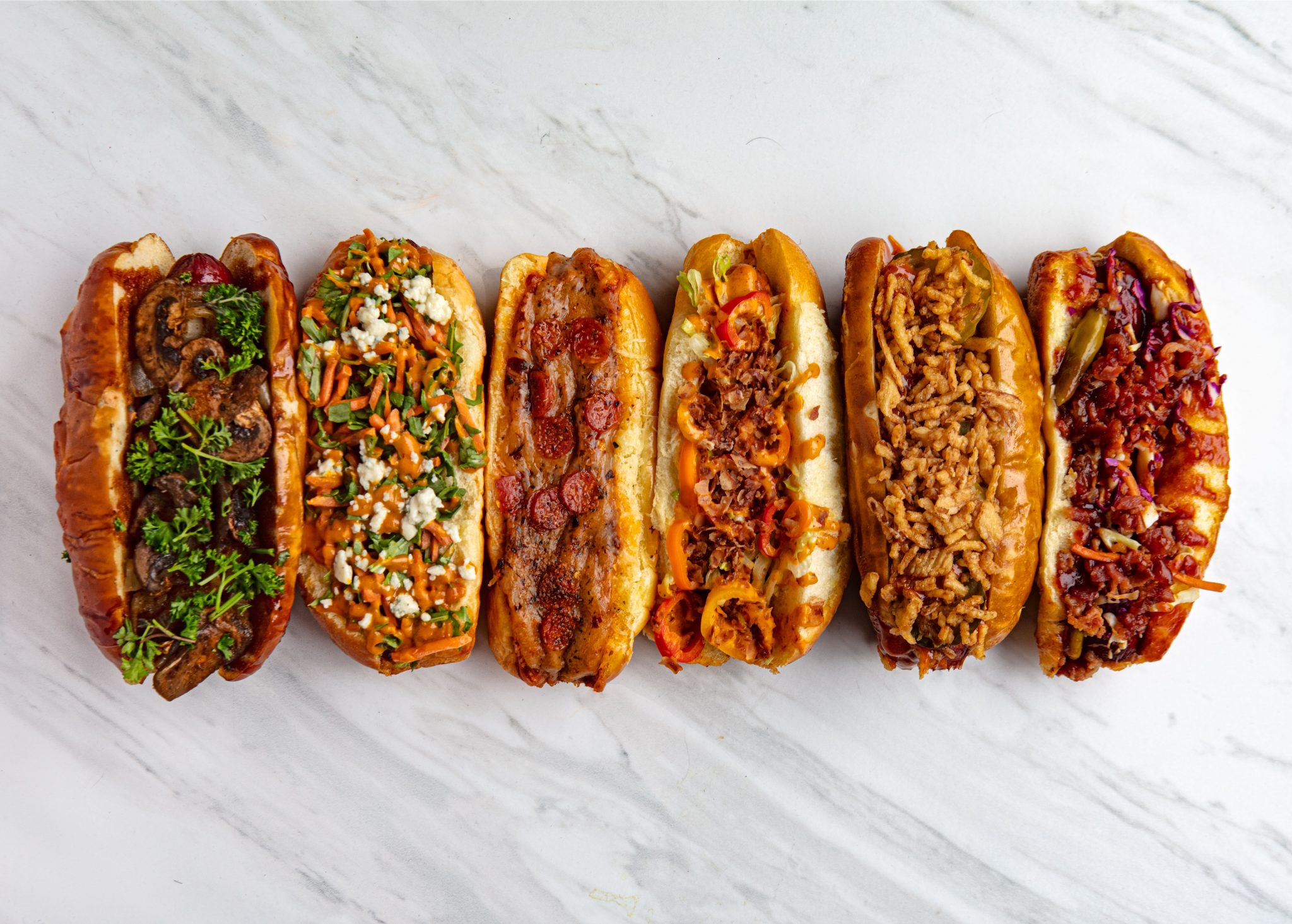 Once “We Let the Dogs Out” wraps up, Morelli says there’ll be a redux of his Hello Day! cereal series: Steak dogs drizzled with marshmallow sauce and a crinkle of crunchy breakfast cereals, from the Cookies and Frank (with Oreo Os), to the PB and Coco (with Cocoa Puffs) to the Looper (Fruit Loops). There’s also the Cinnamon Toast Craving (Cinnamon Toast Crunch) and the Captain Berry Good (yes, Captain Berry Crunch) plus, a have-to-know-to-ask-for-it special, compliments of Morelli’s youngest daughter Bailey: The Unicorn, a steak dog with rainbows of marshmallow, Lucky Charms cereal and sprinkles.

If you’re thinking sugary cereal on a hot dog sounds like an April Fools’ prank, you’re not alone: “Some customers assumed it was a joke because we launched it April 1,” says Morelli, “But I told them no, we were serious. Breakfast cereal is something nostalgic that has a joyful association and can be enjoyed any time of day. And the series has been successful—especially with kids. We still have people coming in asking for the hot dogs in this series, which is why we’re bringing it back.”

As random as the sandwich builds may sound, each must come together in an eye- and palate-pleasing way to make it to market. It’s a creative process that Morelli—chief taster and recipe developer—loves. An R&B and pop recording artist who also established a web design and marketing agency prior to his hot dog adventures, Morelli never trained as a chef. “But I’ve been creating since I was a kid,” he says, “Musically, writing and producing songs, and singing. So honestly, I just borrow from that skill set when I’m thinking up a new hot dog.”

“It’s almost like writing a song,” he says, “where I’m thinking about lyrics and subject matter, melody, and bass line all coming together. Here, the bun is the bass, the hot dog is the subject, the sauce is the melody that keeps everything flowing, and the topping is the razzle-dazzle that makes it all special.”

Morelli finds ingredient inspiration in Chicago neighborhoods. Wanting to pay homage to Portage Park with a fancy steak theme, for example, Morelli topped the Portage House Dog with sautéed mushrooms and onions, made more interesting with the addition of root beer steak sauce.

But he also gets most of his ideas wandering up and down grocery store aisles. “The grocery store is like my playground or candy store. Just going there I’m like, ‘This could work with this. Or that with that.’ Nothing is too far out.”

Morelli’s family pitches in to help and brainstorm. Bobby’s wife, Shy, created the bourbon barbecue sauce that’s made the Bronzeville Bourbon hot dog the best seller. Brooklyn, who started the business with her father as his right-hand assistant and has been recording music with Dad since she could talk, still works the counter at the new location, and says she’s learned a lot. Little sister Bailey, seven, learned to bake brownies that are sold in three varieties, vegan chocolate fudge, double chocolate and turtle chocolate. She also wrote a children’s book about learning to bake, “Bailey’s Brownies.”

Expect to see more outside-the-box creations as The Hot Dog Box takes even more fresh ideas to market. “I have a hot dog build book with fifteen to twenty possibilities ready to go at any time,” says Morelli who hopes to add more units, and to build up the company’s e-commerce business.

“Selling direct to consumer is our ultimate goal,” says Morelli, “but we would also like to partner with specialty markets and even the Whole Foods and Mariano’s of the world. There are so few hot dog stands doing anything other than the traditional Chicago-style hot dog,” he says. “I like the traditional, but I’m really big on standing out and having individuality. This world is colorful and there is room for being different. That should be celebrated.”