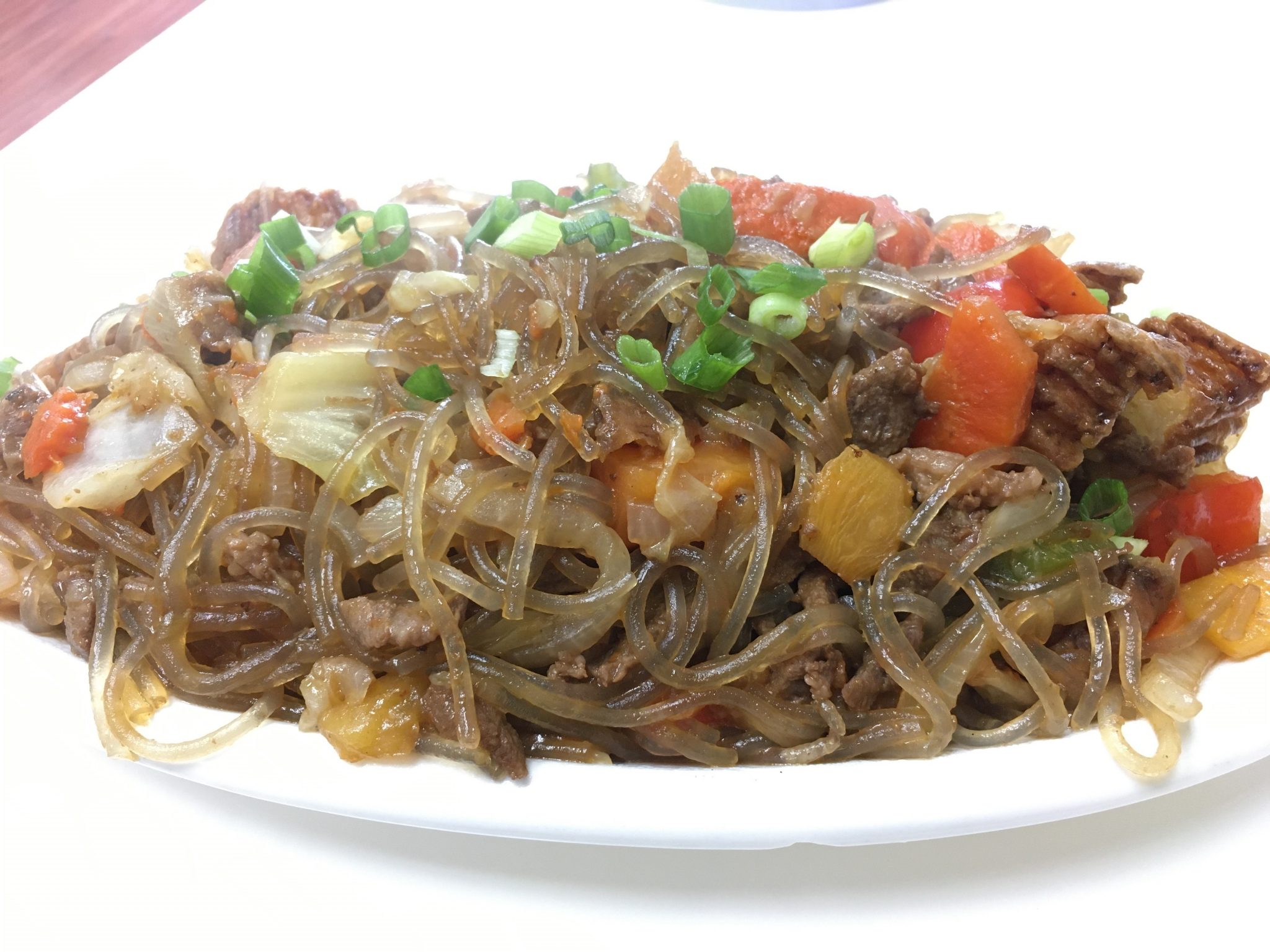 Noodles with meat at Arvin

When I arrived in Mongolia, one of my first questions was, of course, about what food people eat in Mongolia. My guide explained emphatically, “Meat. We eat meat.” As I traveled, I found this to be only a slight oversimplification. There is a good bit of dairy (from yak, camel, horse, sheep and goat, which are also sources of meat). In the city, root vegetables introduced when the Soviet Union controlled Mongolia—carrots, beets, potatoes—are common, mostly in salads. Urban options include foods introduced from other meat-loving cultures and there are noodles, lots of noodles, but the focus, both urban and rural, is on meat.

Almost eighty percent of Mongolia is steppe pastureland, which supports huge herds of grazing livestock. The remaining twenty percent is divided almost equally between barren desert and forested mountains. Less than one percent of the land is arable. Therefore, grain, fruit and vegetables are rare, celebratory and often imported. This geography is why food in rural Mongolia is still close to identical to what Marco Polo described when he wandered through the land more than 700 years ago.

While not everything encountered was great (not a fan of sun-dried camel cheese), most of the food ranged from pleasant to quite wonderful, and a sheep cooked with hot rocks was outstanding. Of course, food was far from the focus of exploring Mongolia: there is remarkable history, culture, wildlife and geography, though food was woven through much of this. I felt certain, however, that when I left, that would be the last of my Mongolian culinary adventures.

Back home, I was giving a slideshow about Mongolia at the Glenview Library, and I learned that about one-third of the audience was Mongolian. Daunting, right? Fortunately, they liked how I portrayed their native land, and some suggested that I might recapture a small part of my experience at Mazalae Mongolian Restaurant (9216 Waukegan Road, Morton Grove).

Upon entering the attractive, understated Mazalae, I greeted the hostess in Mongolian, to which she responded, “You will want milk tea.” I’ve had milk tea with a wide range of milks, but the thing that makes it noteworthy, even here with cow’s (rather than mare’s) milk, is the use of salt instead of sugar. It was savory and warming and made the wait for dinner easier. (Everything is made from scratch when you order, and there is even a warning on the menu for one item that takes at least thirty minutes.) The clientele is primarily Mongolian, and this operation is clearly a family affair. 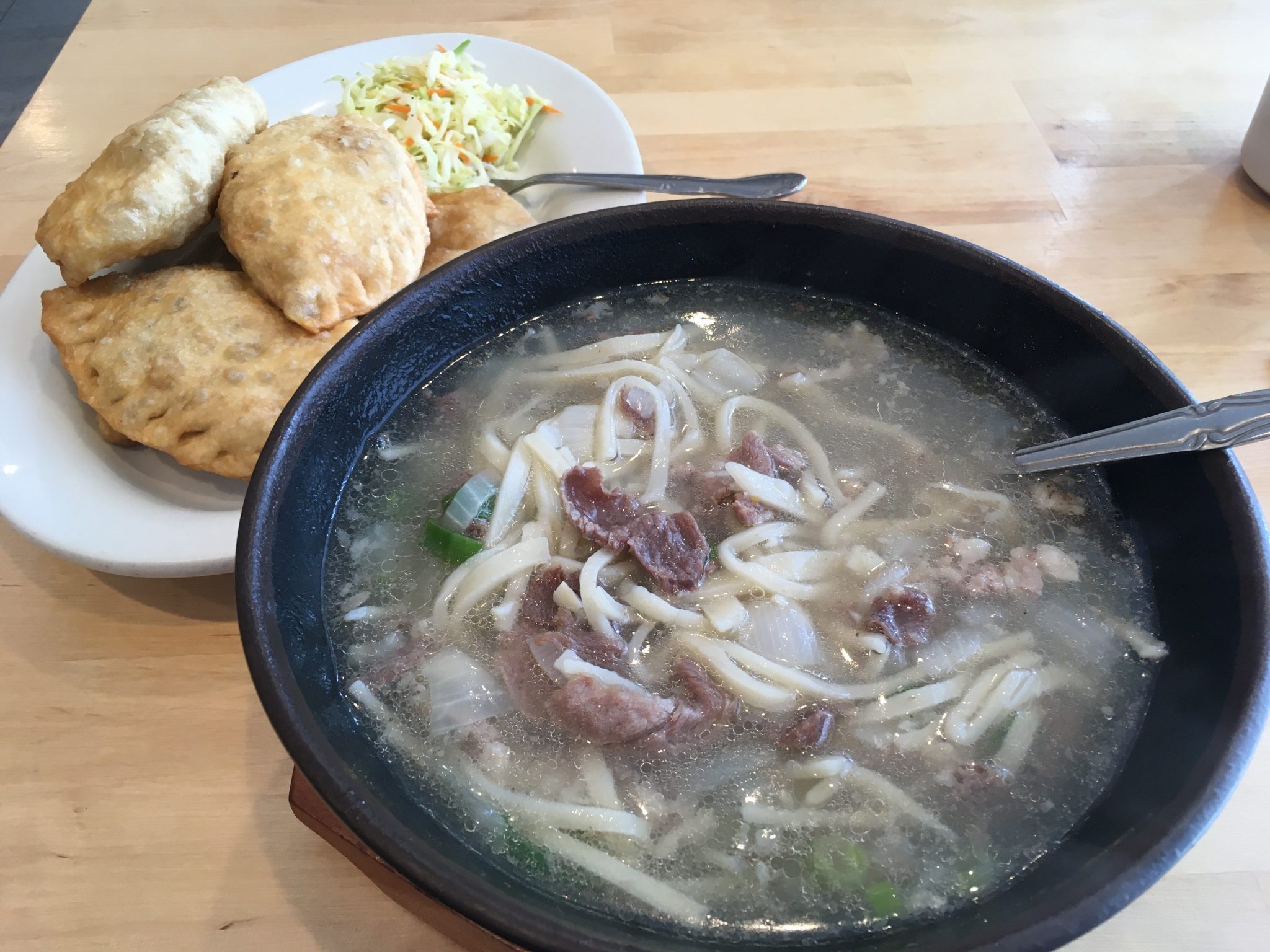 I wanted to eat things I’d had in Mongolia, so I ordered lamb soup with noodles (Guriltai Shul) as a starter. The first time I had this soup was in the Gobi, at a gathering of nomad herders celebrating the first milking of the mares—the presence of noodles underscoring the importance of the occasion. (Airag, fermented mare’s milk, is the national drink of Mongolia; high in vitamin C, it is a lifesaver in a diet with no fruit or vegetables.)

There is some debate whether Mongolians invented or adopted meat-filled dumplings; one thing’s for sure: they introduced them everywhere they went. Similar dumplings are found today across the entire stretch of the Mongolian Empire, which sprawled from Korea and Japan to Eastern Europe. There are essentially three categories of Mongolian dumpling, though they generally have the same filling (meat—of course!—and onion) and the same simple flour-and-water dough wrapper. Buuz (pronounced “boats”) are two-bite dumplings that come in different shapes, but are usually steamed, though occasionally pan-fried. Bansh are smaller and boiled; huushuur are five-inch half-moons and are fried.

The noodle soup at Mazalae is sublime (though only if you like lamb!) and their huushuur (made with beef) is juicy and flavorful. There are no condiments on the tables, but I never needed them. 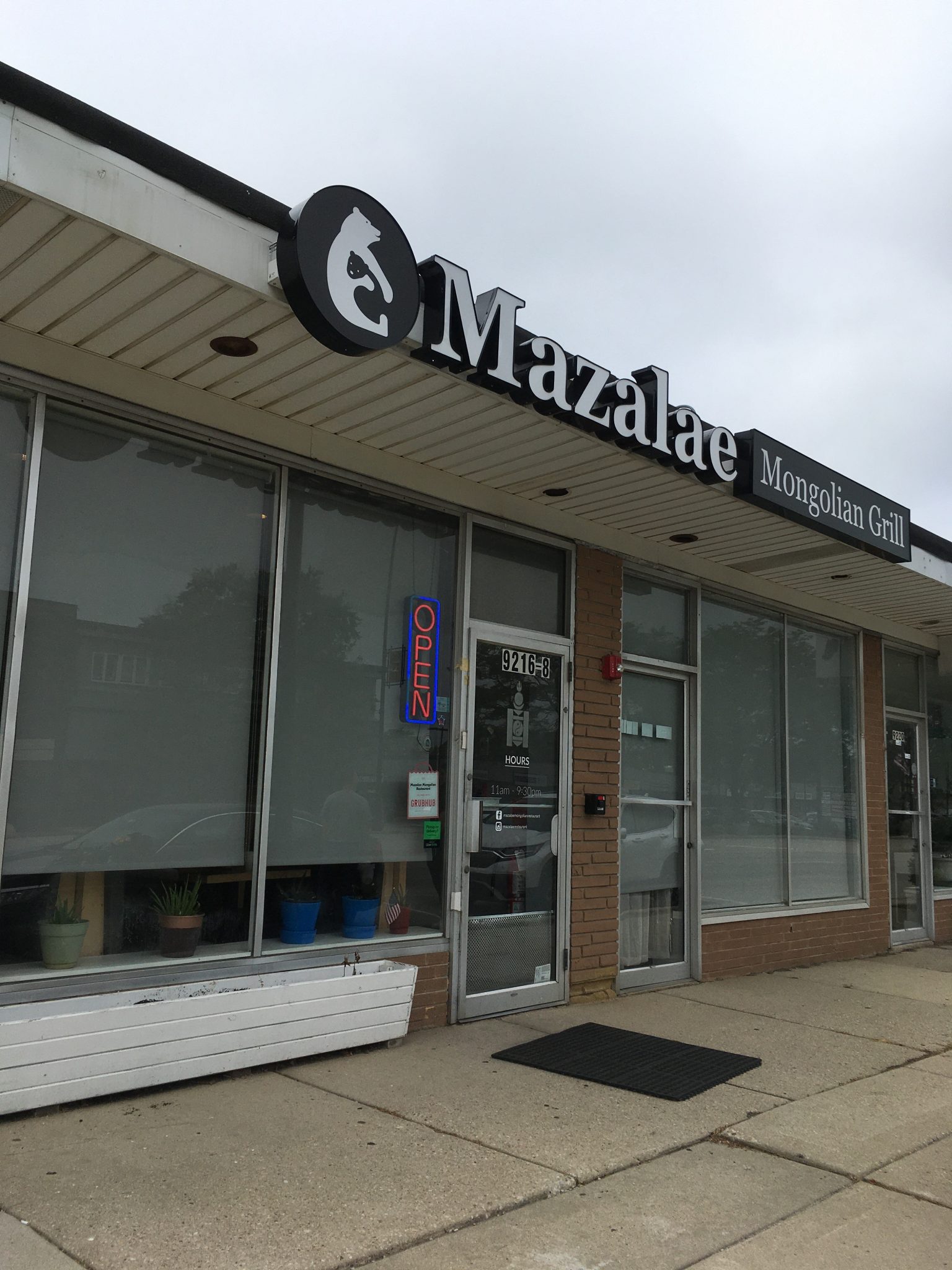 I have seen Mazalae change over the years. The once-open kitchen is now enclosed in glass, but you can still watch them make dumplings by hand. The menu is smaller, and the restaurant has expanded into the space next door. Though I miss a couple of their stews, their lovely, lamb-y noodle soup is still a favorite, as is their huushuur. Their servings are quite generous and if you order both, you will likely be taking some home.

Though I still love Mazalae, I recently tried out Arvin (8482 West Golf Road, Niles). Both places offer a combination of ancient tradition and evolving urban Mongolian, with far more noodles and vegetables than would be found in rural areas. Arvin is small, bright and clean. There are maps on one chrome yellow wall and photos of Mongolia on the other. Everyone in the restaurant and among the steady stream of carry-out customers was Mongolian.

Handing me a menu, the host at Arvin stated emphatically, “All beef, no chicken,” which reminded me of the “We eat meat” from my guide in Mongolia. The host brought me a thermos of milk tea, though soft drinks, water and fruit juice are available. The menu offers beef soups, stews, stir-fry and, of course, dumplings. Familiar salads (carrot, cabbage, potato) are also available, as well as some lamb.

The menu here is longer than the one at Mazalae, but here, too, names are in Mongolian and descriptions in English. The price of almost everything on the menu was $17, so a bit higher than at Mazalae (where menu items average $12 to $13), but servings are substantial, and I noticed several diners sharing. I ordered Puntuuztei huurga, which is fried glass noodles with beef and vegetables (carrots, cabbage, potato, of course, but also some bell pepper). The only condiments on the tables were Maggi sauce and ketchup, with one bottle of Sriracha on demand. However, my umami-intense noodle dish did not need any additional seasoning. The huushuur served to a threesome at the next table looked fabulous and smelled great. Next time.

Wondering how two restaurants could be supported by the local Mongolian population, I looked up some statistics when I got home from Arvin. Of the roughly 30,000 Mongolians in the United States, about 8,000 are in the Chicago area, enough so that we now have a Mongolian consulate. These restaurants should continue to do well. And while the hosts and servers clearly connect more easily with their Mongolian-speaking patrons, the earnest requests of “You come again?” at both restaurants show that they are happy to share their culture. While this is perhaps not gourmet fare, it is a tasty way to connect with a less-familiar culture, and if you’re like me, you always want to try foods from an unfamiliar culinary tradition.