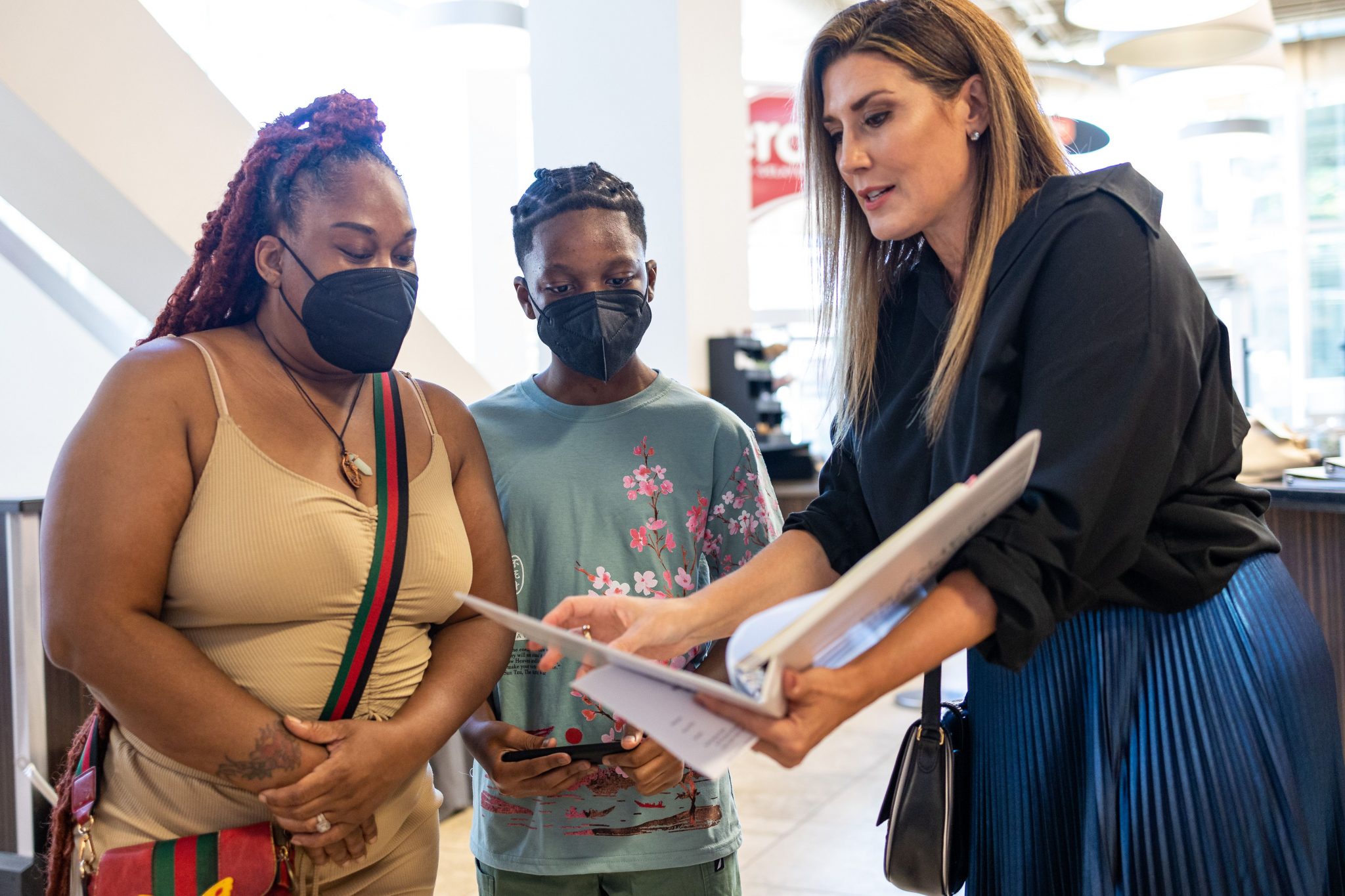 On “Check, Please!” host Catherine De Orio teased out what citizen reviewers really thought about their dinners at popular Chicago restaurants. Now with Yes, Chef! Culinary Camp for young students, she’s focusing on the back of the house, which diners rarely see, but which has been hurting for qualified candidates who can work their way up the kitchen food chain from Junior to Executive Chef.

As executive director of the Foundation for Culinary Arts (FFCA, formerly Kendall College Trust), De Orio leads this nonprofit, which helps students in underserved communities who believe they might have what it takes to pursue careers in professional kitchens. The FFCA offers Yes, Chef! Culinary Camp to provide students with knife skills, an understanding of kitchen terminology, hands-on instruction in meat fabrication, cooking a meal from scratch, and other everyday tasks for a chef. Every day of the camp, students cook along virtually with Chopping Block instructor Lisa Counts, learning how to maintain the safety and comfort of their kitchen, and at the end of the day, each student makes a meal they can serve to family and friends. All ingredients and equipment are provided by FFCA.

Helping Restaurants Get the Staff They Need

De Orio says that “most of our campers are seventeen years old. They’re finishing their junior year of high school, and they plan to go into the culinary field. Our camp was our most popular program, and it seemed to fit the biggest need in terms of helping to get hospitality workers into the field, right after high school. To do that, we needed to give them basic skills because what I was hearing from chefs is that they need people who have the fundamentals down cold.”

Organizations like the James Beard Foundation and others have focused in recent years on increasing the recognition of Black chefs and others who in the past have not received the support they deserve. “It’s hardly shocking to say that there’s a lack of diversity in professional kitchens,” De Orio says. “So, how do we make kitchens more diverse? Well, one way is to actively seek out young people in underserved communities who may be considering a career in the kitchen but who feel going to culinary school is perhaps an unrealistic goal.

“If you find promising students already in culinary school, that’s great,” she says. “And you can help them along with scholarships. But the thing is, these culinary students have already made the decision to work in culinary, so you’re not getting more kids on the culinary track because you’re helping kids who are already there. We refocused on these high school students and decided to create this community where we help them get the training they need to continue along the culinary career path.”

The culinary camp is now in its sixth year. When it started out, many of the classes were taught in person. De Orio remembers that “the program started as a kind of intro to the kitchen, almost like a first block of culinary school (highly abridged, obviously). It was fast-paced, and the students learned all the basics of safety and sanitation, as well as nutrition.

“Our thing was truly to be about teaching foundational skills, but also having this nutritional educational component. Because our campers are many times from food deserts, a lot of them don’t have a ton of nutritional education or don’t necessarily come from a family that has that knowledge themselves. We thought that was important, and even if they decide this is not the lifestyle for them, we’ve given them some portable life skills.”

When COVID hit, the in-person component of education was replaced with a virtual model. But going virtual, De Orio says, “was hard for us because we couldn’t guarantee the students would have internet services at home, let alone a laptop or mobile phone so they could participate via Zoom. Oddly, there was an unforeseen benefit, because of COVID, Chicago Public Schools has provided technology for most CPS students, including tablets and internet access.”

In addition to devices and internet connectivity, De Orio says, “There are a few things students need to have to participate in our virtual lessons: they need a sink, refrigerator and oven. We provide everything else, including equipment kits valued around $500.” 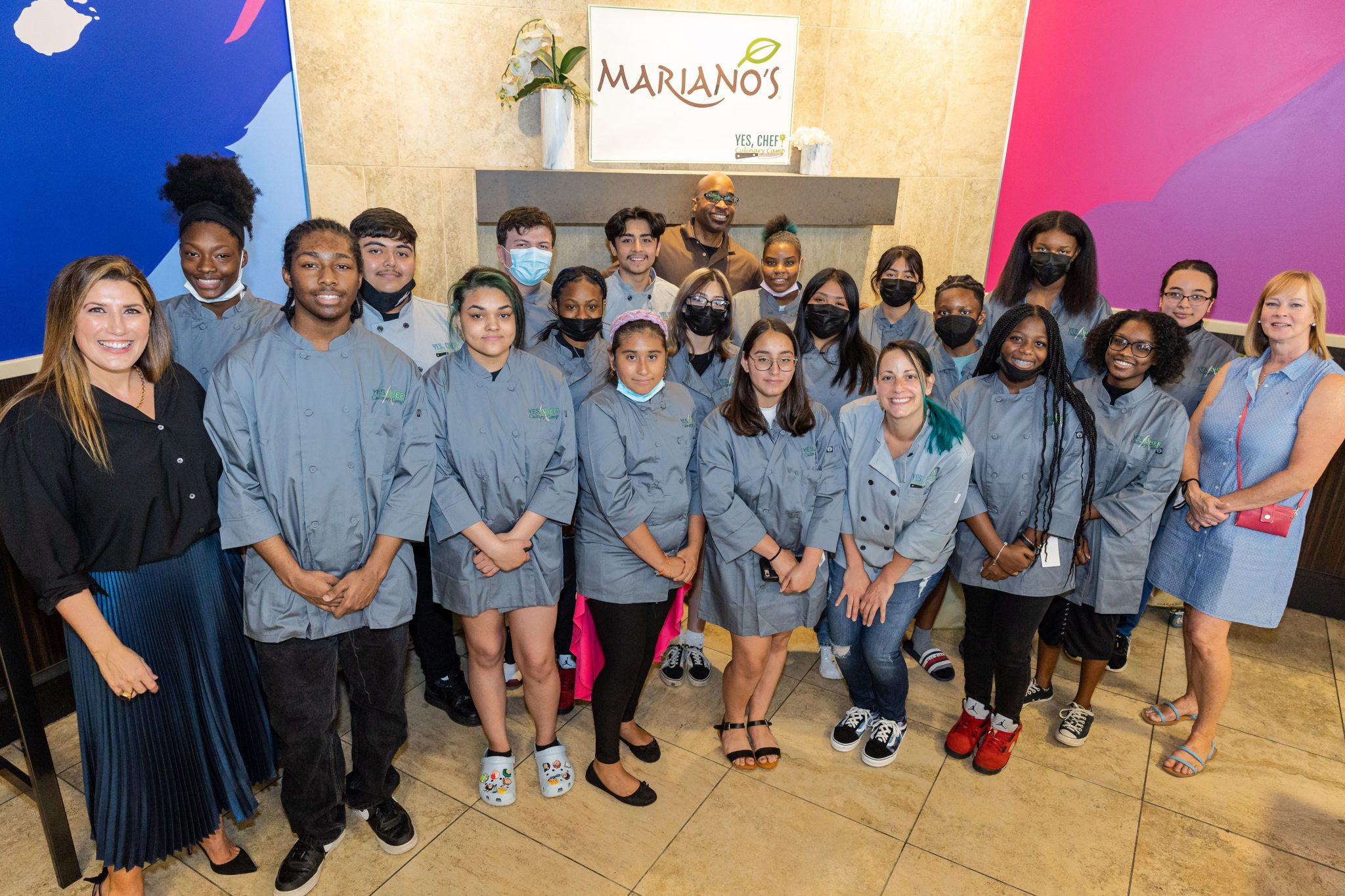 De Orio and another group of Yes, Chef! participants

The pandemic forced the closure of schools, so CPS figured out that they would have to expand internet access and give students tools—like laptops—to connect with teachers virtually. This reliance on virtual learning made it possible for students to keep learning during the pandemic. It also helped schools, including Yes, Chef Culinary Camp, to develop a model for learning that would allow students from all over the city to participate in the program. It doesn’t really matter where in the city students are located; if they can connect to the internet, they’re in.

Accessing the virtual classroom from home means students don’t have to commute, which saves time and expense. During every day of camp, they’re also preparing food for their families, so parents can keep track of what their children are doing and then have a dinner together at the end of the day. “One of the reasons we do the dinners,” says De Orio, “is to build communities, whether that’s a community of parents, guardians or neighbors. Community is one of the key building blocks to living a healthy life and making the right choices based on the confidence that comes from knowing you have a support network behind you. Across the United States, that sense of community is more important than ever.”