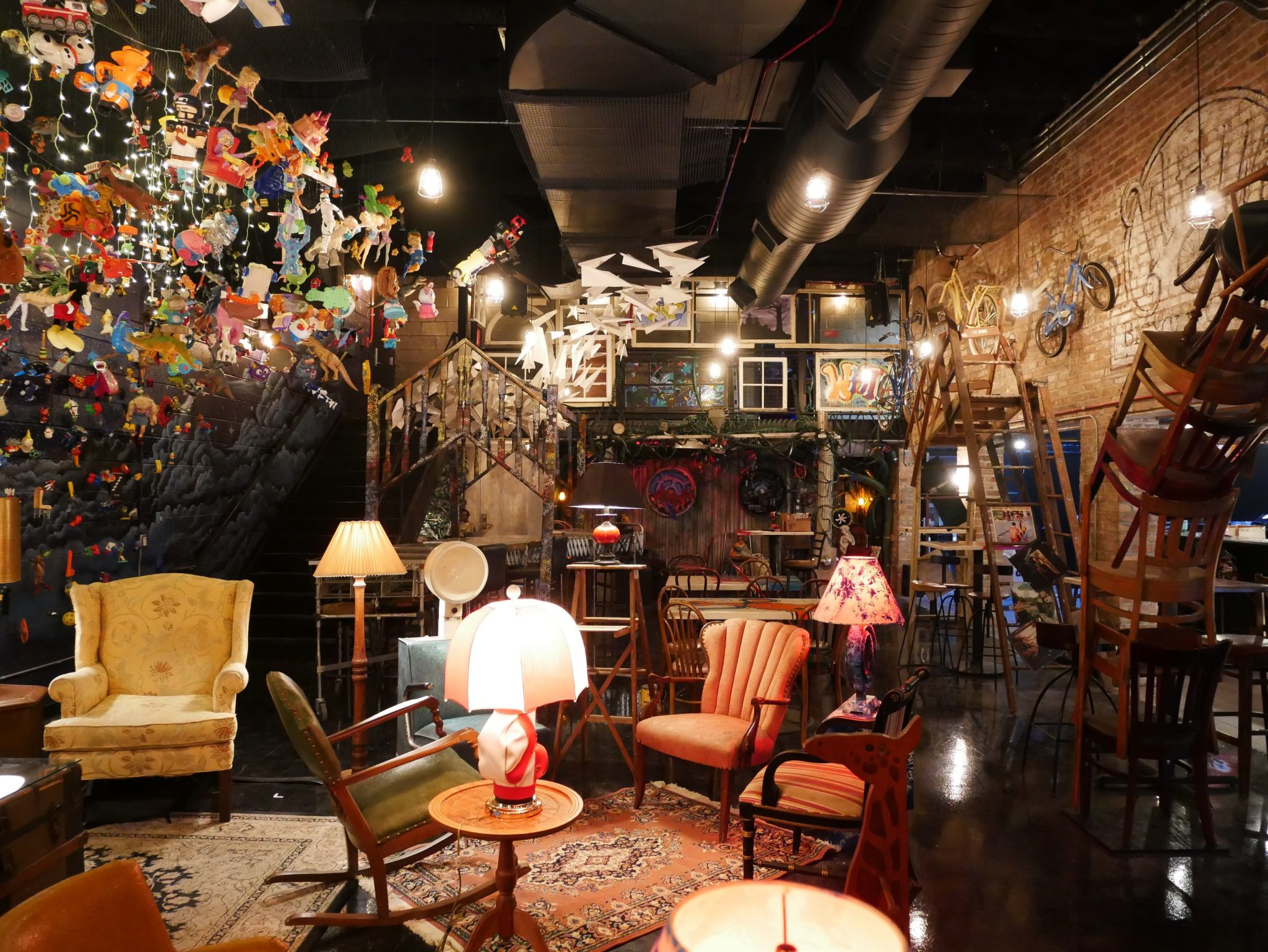 “Duck in on a WHIM, Stay for the Wonder.” That would be the tagline I’d propose for WHIM if I were hired to do their public relations.

As it happens, that’s exactly how I discovered this otherworldly cocktail bar-slash-immersive art space on Belmont. My wife and I were early for a play at Wit, the next-door theater complex, and she spotted a soaring, leaning tower of chairs through an open door. We were intrigued.

Going into WHIM on a whim was stepping through the looking glass. An armada of white paper planes fluttered in an air-conditioned breeze. Tiny toy horses, dinosaurs and Christmas angels blinked amid strings of lighted beads. There was an alcove of crazy clocks and a pantry of potions in jars. Caramel-colored vintage armchairs anchored a wall of industrial switches and factory circuit-breakers.

Get the picture? I didn’t. Jill Valentine, WHIM’s executive director, helped me understand: “We wanted artists to blow your brains out and have a blast.” 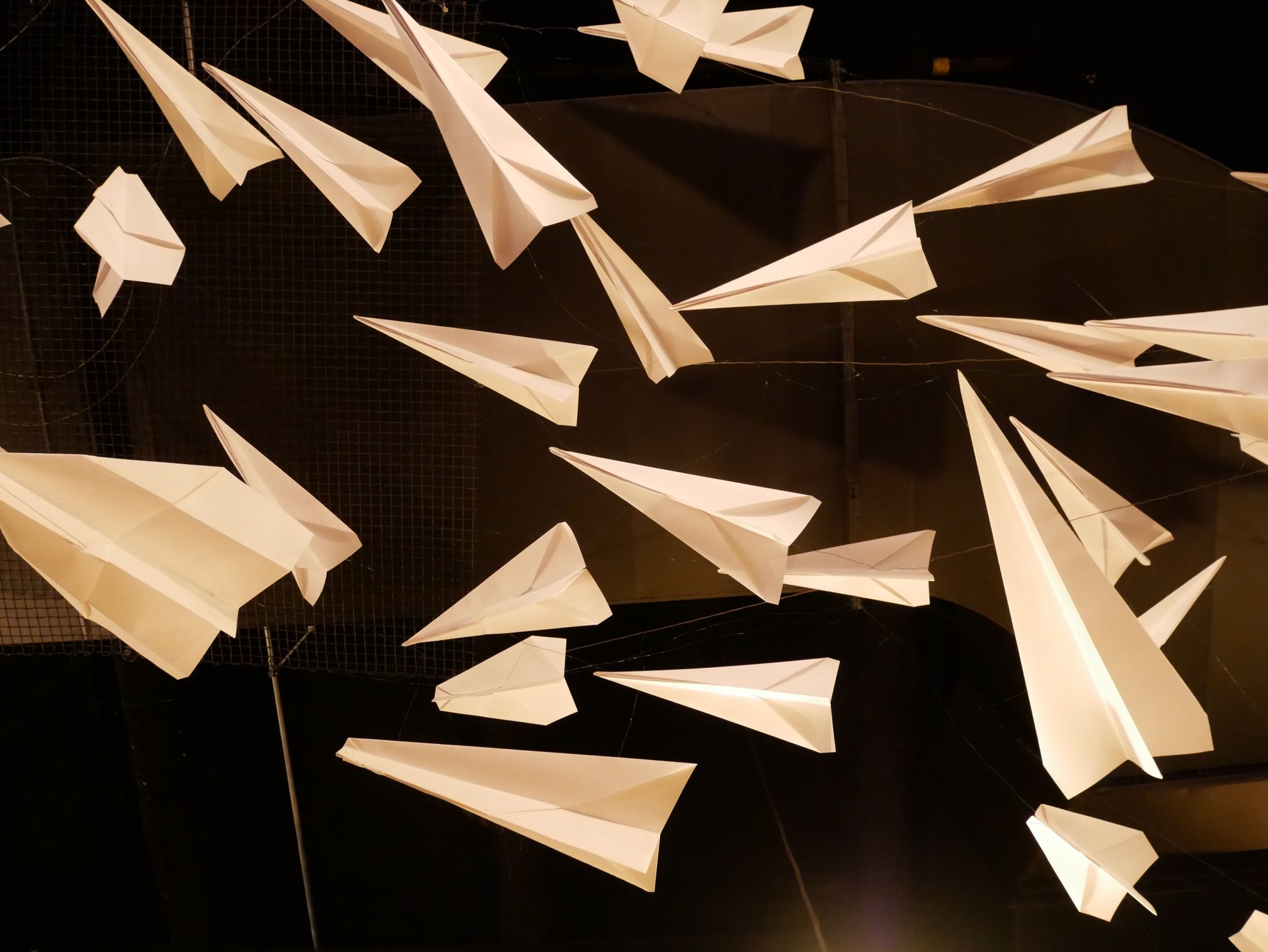 WHIM’s eloquent creative director, Brad Younts, puts the experience into context. It was August 2020, and Younts was a board member of Stage 773, the group that manages the Theatre Building Chicago with the mission of increasing and supporting Chicago’s artistic community. Younts was distraught: COVID had shuttered the Chicago stage, audiences were hibernating, performances suspended, schedules cancelled. The design community was out of work.

“It was then,” says Younts, “that I first heard the phrase, ‘We have this crazy idea.’”

The idea, as it evolved, was to take the entire 12,000-square-foot 773 space—four theaters of different shapes and sizes—and turn them into sort-of-an employment agency for Chicago’s idled design community: scenic creators, visual artists, graffiti muralists, lighting people and sound engineers. To top it all off, there’d be work for performers, actors, jugglers, musicians and dancers.

This last group—the performers—has yet to fully materialize, though a rollicking twelve-piece mariachi band was on hand for the big opening in mid-July. WHIM, a not-for-profit organization, boasts an intimate fifty-five-seat cabaret stage for live music on Saturdays and a range of shows on other nights. When I drop in for Thursday karaoke, a terrific group, the Kathryn Lachey trio, is taking a break from its summer wedding circuit and thrilling the room.

The big lure, for now, is the visual extravaganza and the whimsically named venues: The Enchanted Forest, The Lobby of Second Chances and The Witch’s Pantry. It’s impossible not to feel mesmerized wherever you turn. Could those be the innards of a piano? Is that a golf cart? Are those doll clothes? Much of the crazy collage and eye-popping wall displays are courtesy of artist Alex Morales of SmartMouth Design, who plundered his nearby warehouse for inspiration. 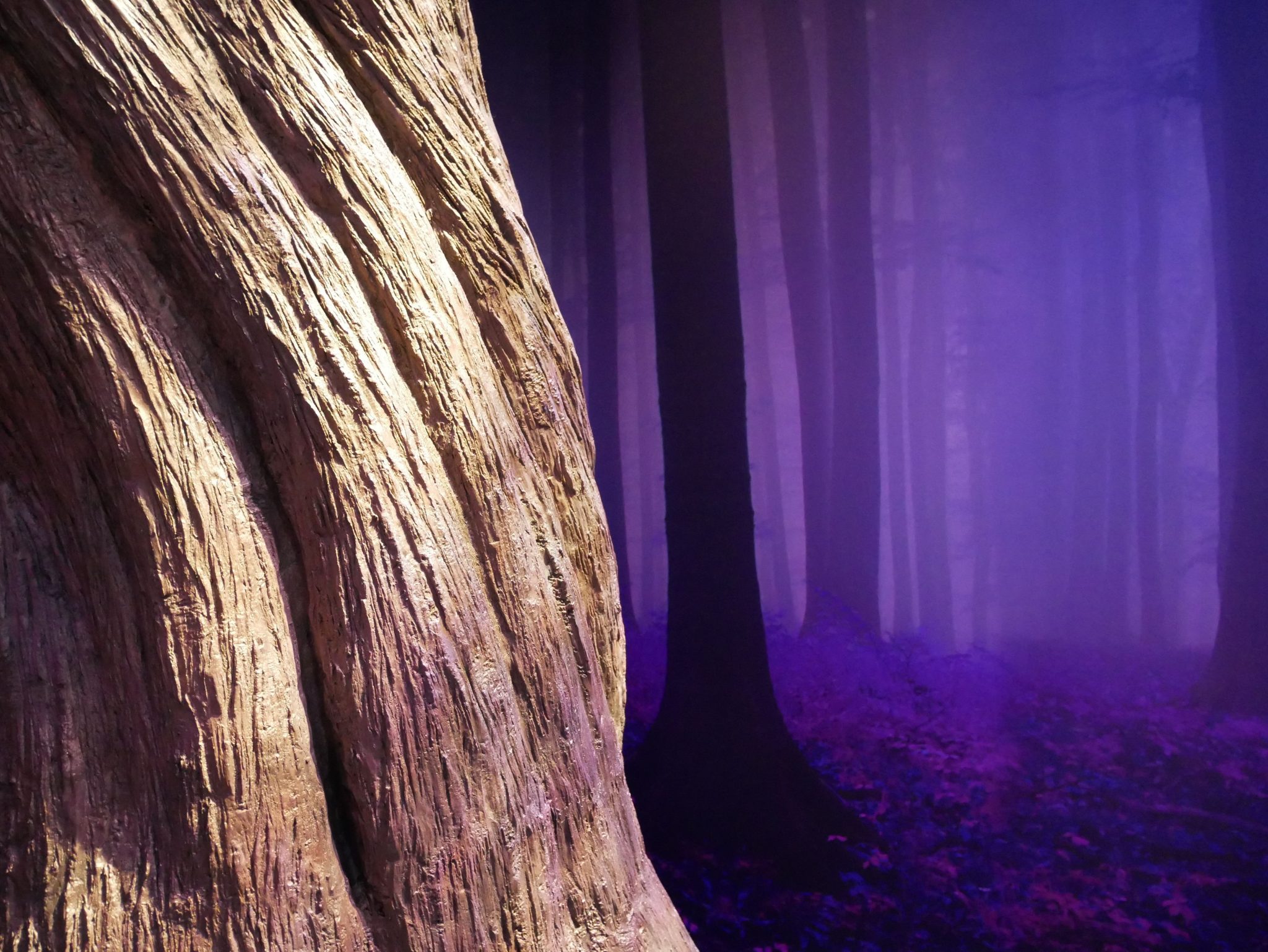 “It comes from everyone and from all over,” says Valentine. “Estate sales, back alleys, the street, you name it. That salon chair is from a woman’s basement. That shark’s head is made up of shoes—shoes!”

Valentine, a longtime fixture in Chicago sketch comedy, among many past lives, is a driving force at WHIM and the one who coined the term “art on top of art on top of art” to give the goings-on coherence. In fact, this is only Phase One, a sneak peek before the total experience is rolled out when funding comes in. So far, the WHIM footprint is 3,000-square feet, taking up several overstuffed rooms.

Amazingly, another twenty-five rooms remain. For a glimpse of the future, Younts took me on a backstage tour of the labyrinth, spaces of every conceivable size, the drywall dividers up, plaster and paint supplies in buckets, saws and brooms at the ready, all to be fitted as soon as Phase Two is funded.

These rooms, then, will comprise what Younts envisions as a curated tour for small groups and the chance to “dig deeper, like the space that will contain drawers of journals that visitors can read and be inspired by.” This “interactive playground,” as WHIM promo material calls it, may not delight those traditionalists who lament the loss of the four 773 stages. No longer will wayward theater companies and budding playwrights find a home here. Younts is headed in a different direction. He wants to embrace the future, and the 773 board supports his vision. The day before we talked, he was named chairman of the Stage 773 board.

“If you look at what’s been happening the last ten, fifteen years,” he explains, “it’s the shattering of the fourth wall. The line between the artist and the audience is completely gone. The audience is part of a story moving through space. Here they’ll have a much more immersive experience.”

“And they’ll have an immersive drink!” chimes in Valentine.

Oh, yes, the bar. It’s big and alluring and right there on the right as you come in. To suit the ambience and WHIM experience, the bar manager Gia Damiano has designed an intensely interactive menu of cocktails. I’m sipping the “Chain Smoker,” a blend of mezcal, tequila, bitters and a cherry, only instead of an actual cherry, there’s a layer of cherry wood that’s set afire and which the drinker, me, controls with a lid. Pyrotechnics and smoke aside, it’s delicious. Or you could try the Tarty Party, which I did, for a different take on drinking—or should I say doctoring? The cocktail itself is vodka, fresh lemon and lime juice layered with “our galaxy pea flower syrup,” says Damiano, before handing me a syringe. The drink changes colors as you decide when and how much to push the plunger. 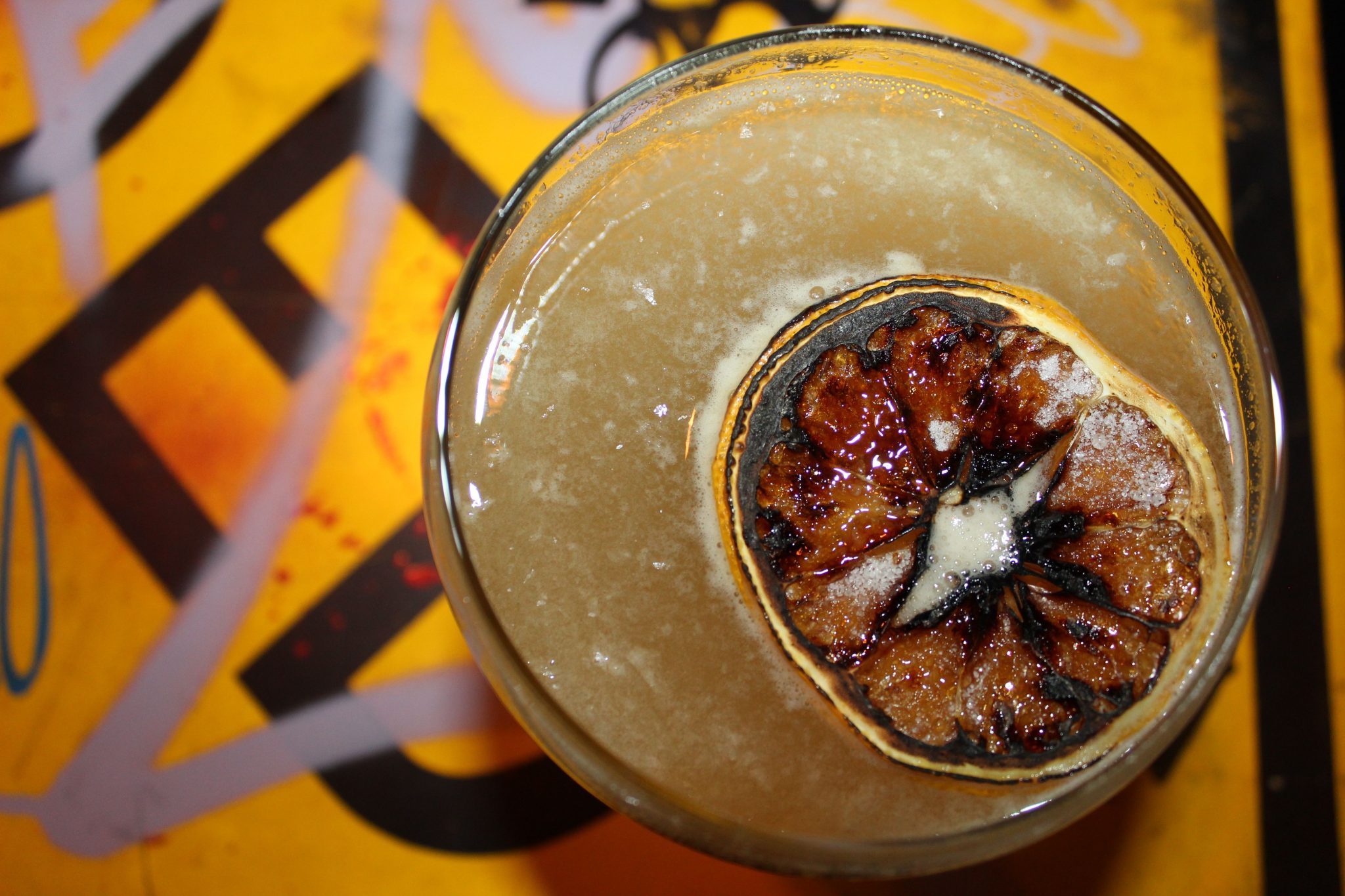 Other drinks include a Nosey Posey (pomegranate juice, rose water and Prosecco) and the ever-popular Campfire S’mores (vodka and Godiva chocolate liqueur, chocolate sauce and a graham-cracker rim). You, naturally, roast the marshmallow.

“We threw away all the plastic cups,” says Damiano. “We didn’t want anything to match. We curated every glass. Even the shelving is custom-built. The cocktails are all handcrafted, so you have to wait an extra minute, but it’s worth it!”

The bar is WHIM’s only palpable source of revenue for now, although Younts envisions a “ticketed experience” when the back rooms open. The construction and operating costs have been taken care of by Stage 773’s board of directors, friends and patrons, plus a succession of government grants, especially those for pandemic-challenged arts organizations. This iconic stop on Belmont may no longer offer drama, as some of us know it, but it’s theatrical.

Younts was thrilled when the curtain finally rose again. “I’ll never forget opening night, I teared up with the jazz band and all those people with smiles here. We had our performance space, it was theater again, and I was so proud that after two years we were able to bring our design dreams to reality and fulfill the mission of 773.”