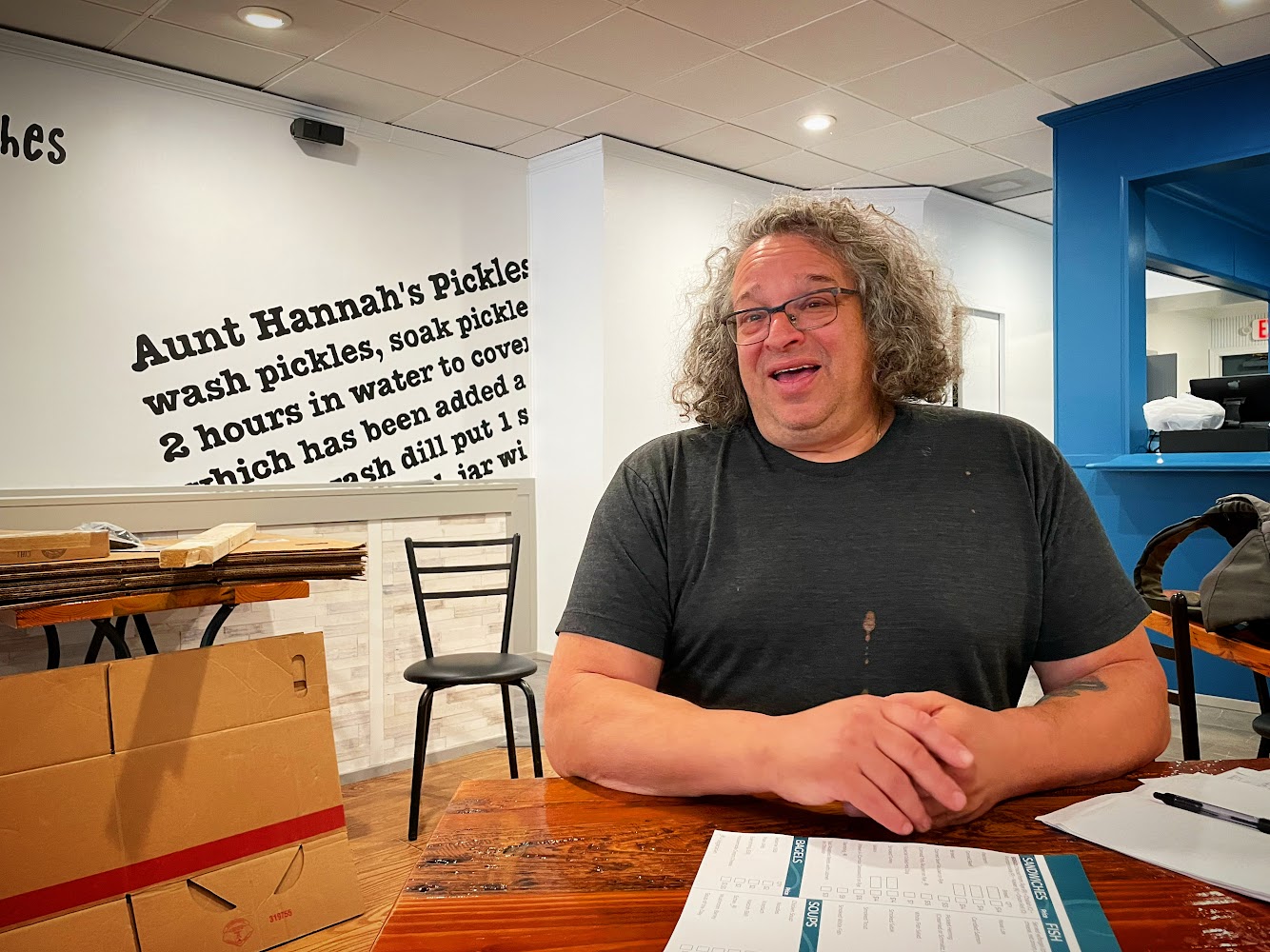 On August 23, Fritzi’s—a much-anticipated deli in Oak Park—opened at noon. We were there a few hours before, and we asked owner Paul Stern about any apprehension he might be feeling about throwing open his doors. Did he have any, you know, fears?

“Heck, yes I have some fears,” said Stern, as we stood in his empty restaurant a few hours before opening. “I’ve got $400,000 into this,” he said, laughing, with the expression you will usually see on his face.

There were other things that might have caused him some fear. His store had been on the cusp of opening for months, and local Oak Parkers had been venting their frustration on Facebook. Why the frustration? Because they were eager for the deli to open, and they’d been waiting for way over a year as they watched the interior space undergo a major renovation, the sign go up, Stern “teasing” by posting photos of food being created, and other indications that the place might be opening soon. But it all was happening so sloooowly. Oak Park posters on Facebook moaned, “Maybe we should be the ones delivering a plate of sandwiches to the work crews so they can get the renovation job done faster!” and “This morning I thought, ‘What if I got out and pushed.’” There were pleadings for the deli to open, but the overriding sentiment boils down to one expressed by a Facebook poster in May of this year: “Just open the damn place!”

It almost seemed as though some in the community thought that Stern was playing a cruel joke on them. How could it all be taking so long? Well, if Stern was bothered by such protestations, he didn’t show it. He had a vision for his deli, and he was going to put in the time to realize that vision as completely as possible. “It was personally important for me to get it right,” says Stern, and pushing so hard and so long to get it right, Stern admits, was some kind of proof that he was “either crazy or fearless.” 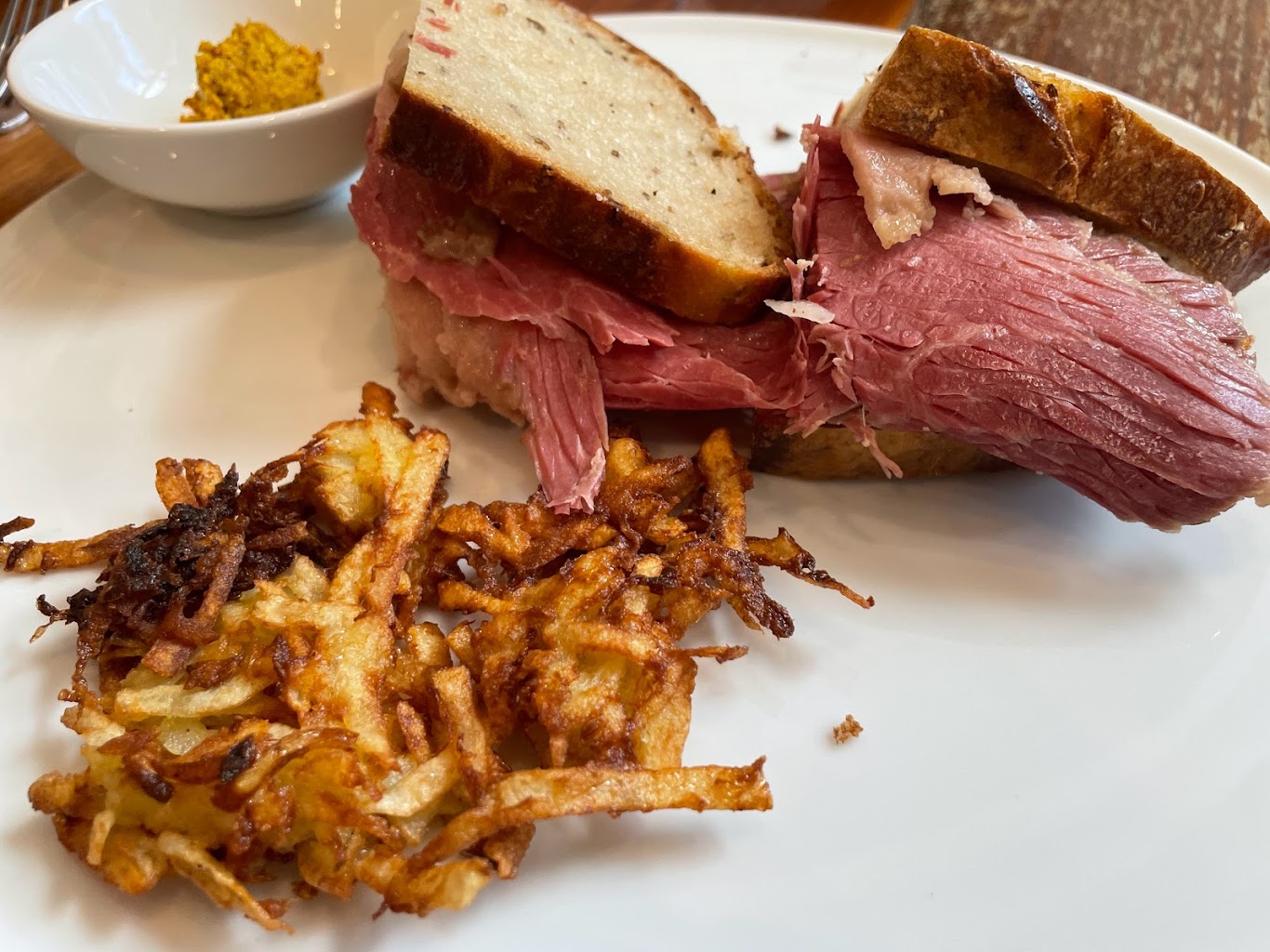 Clearly, there was a lot of pent-up demand for a new delicatessen in Oak Park, and Stern’s launch plan, as he explained to me a few weeks before, was to “just open the doors and let people in” for a soft opening. This was a prudent plan, it seems, because with the community’s over-the-top demand for this place, if Stern announced he was going to open, he’d be flooded with diners. As it was, on Day One, the spanking-new restaurant filled up quickly and young servers struggled to keep up, mostly successfully.Was Stern worried, nervous, or… fearful? If he was, it wasn’t obvious. As chaos swirled on opening day, he went from table to table, greeting guests, keeping an eye on things, but at home in the whirlwind blur of activity. Stern’s vision for Fritzi’s was realized all around him in all its terrible beauty, and a big part of that vision was doing what he was doing on Day One at zero hour: walking around, greeting people with a smile, and kibbitzing. When I spoke with Stern weeks before, he had stressed, “What’s really important about the deli is that it’s social, it’s about conversation. It’s about interaction between people within a neighborhood and outside of a neighborhood. The deli is very much based on the idea of community.”

One of Stern’s models for a deli filled with conversation is one of Chicago’s oldest and most iconic delicatessens. “Like you go into Manny’s now,” says Stern, “and you don’t hear music. You just hear the buzz of voices, whether it’s Gino behind the counter (who has been there for like thirty-five years) or people sitting at tables. And that conversational buzz is particularly important. I would say that a lot of that comes from Jewish family life. Conversation at the table was paramount. A lot of that talk comes from the style of religion. There was debate, right? Everything is up for debate. The religion itself is conversational.”

The namesake of Fritzi’s Delicatessen is Stern’s father. “My father was above all else a political human being,” says Stern. “He moved from New York to Chicago to organize the steelworkers’ union for the Communist Party of America. So, our daily table was a place for political debate.”

There was a lot of talk that first day at Fritzi’s, a lot of conversation at the tables around me, words shouted, and laughs bounced off the white walls, and the room had big, friendly energy. One gentleman sitting at the table next to us exclaimed, “This is the best pastrami I’ve ever had,” and we were very happy with our corned beef, which was leaner than some but had deep flavor that comes from crafting and cutting the meat by hand in-house. The rye bread is also made in-house, and it was exceptionally good, and the latkes were lacy and delicate, not thick patties but a fine lattice of potato threads. 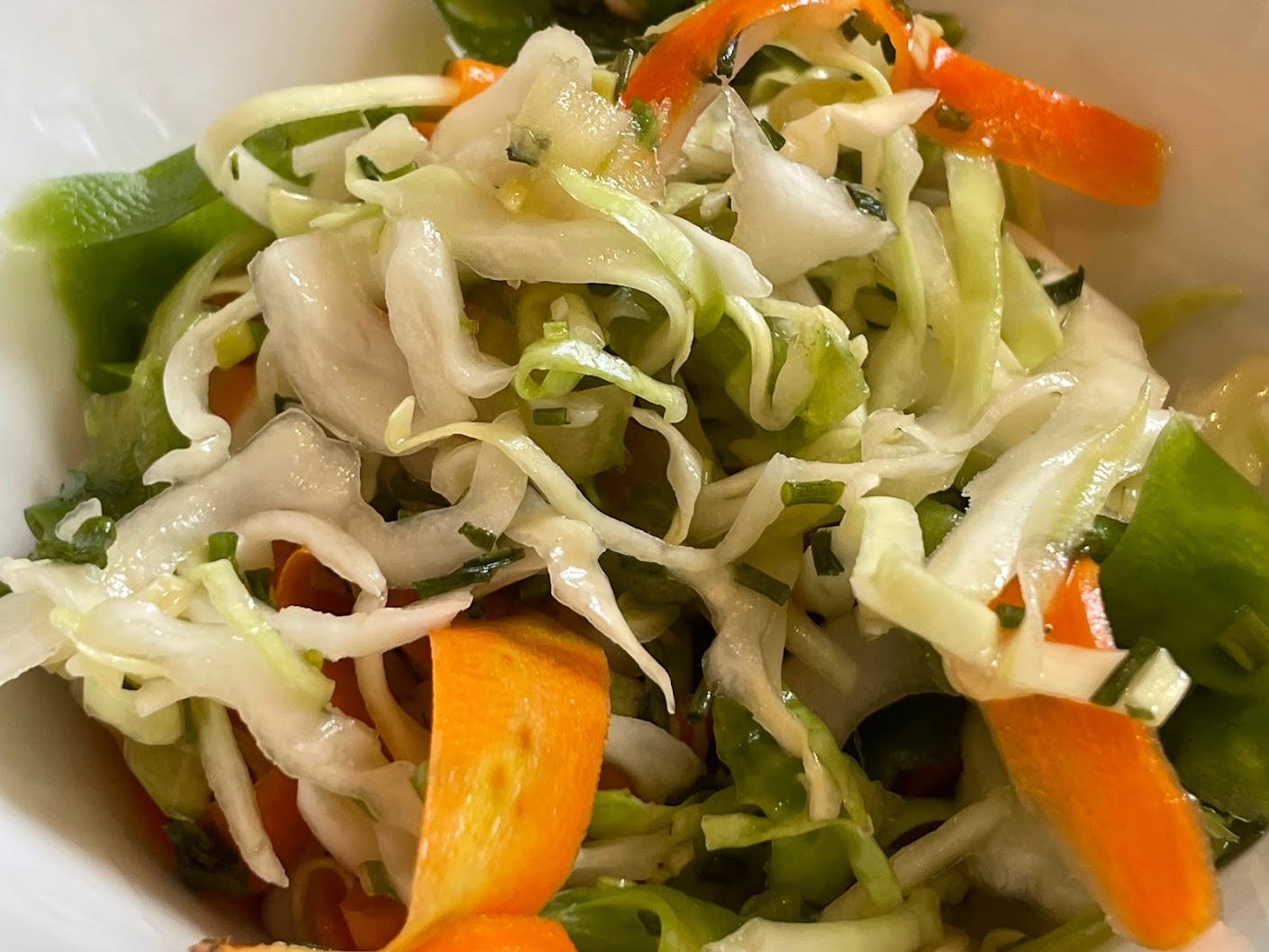 The Deli Slaw—at $4, one of the least expensive items on the menu—was just fantastic, a mix of crisp vegetables in a lightly acidic sauce, the perfect balance to the sometimes fatty slabs of brisket used in pastrami. “I stole the recipe for the slaw from Second Avenue Deli,” Stern says, proudly, reminding us that if you’re going to steal, you should steal from the best.

There are some items on the menu that might surprise you, like jianbing, a kind of Chinese crepe. Stern feels such menu choices require no explanation: “I like it, so I put it on the menu.” That kind of firm, personal and audacious commitment to a personal vision is what has guided Stern through the past two years or so as he and his family were getting the restaurant together. However much the local Oak Park community might have hectored him to open the doors RIGHT NOW, he stayed the course, making the restaurant his own in his own time. He’s probably feeling some fear, that’s only normal, but he either hides it well or his overwhelmingly positive attitude has pushed fear to the side.

Fritzi’s Deli, says Stern, “feeds who I am. There are days when you step back in the space that you’re running and high five yourself, like, this is perfect, perfect. Everything’s on time, food looks wonderful, people are happy and excited to be here. And nobody’s working that hard. It’s all just flowing. The restaurant business can have a lot of surprises. But this is going to be a successful operation. I’m about as positive as I can be, but when it opens, who knows what’ll happen?”

Nobody knows what’ll happen in this or any restaurant, of course, but Stern is facing that uncertainty with many laughs and few fears, which would seem to increase the odds of successfully turning his vision into reality.