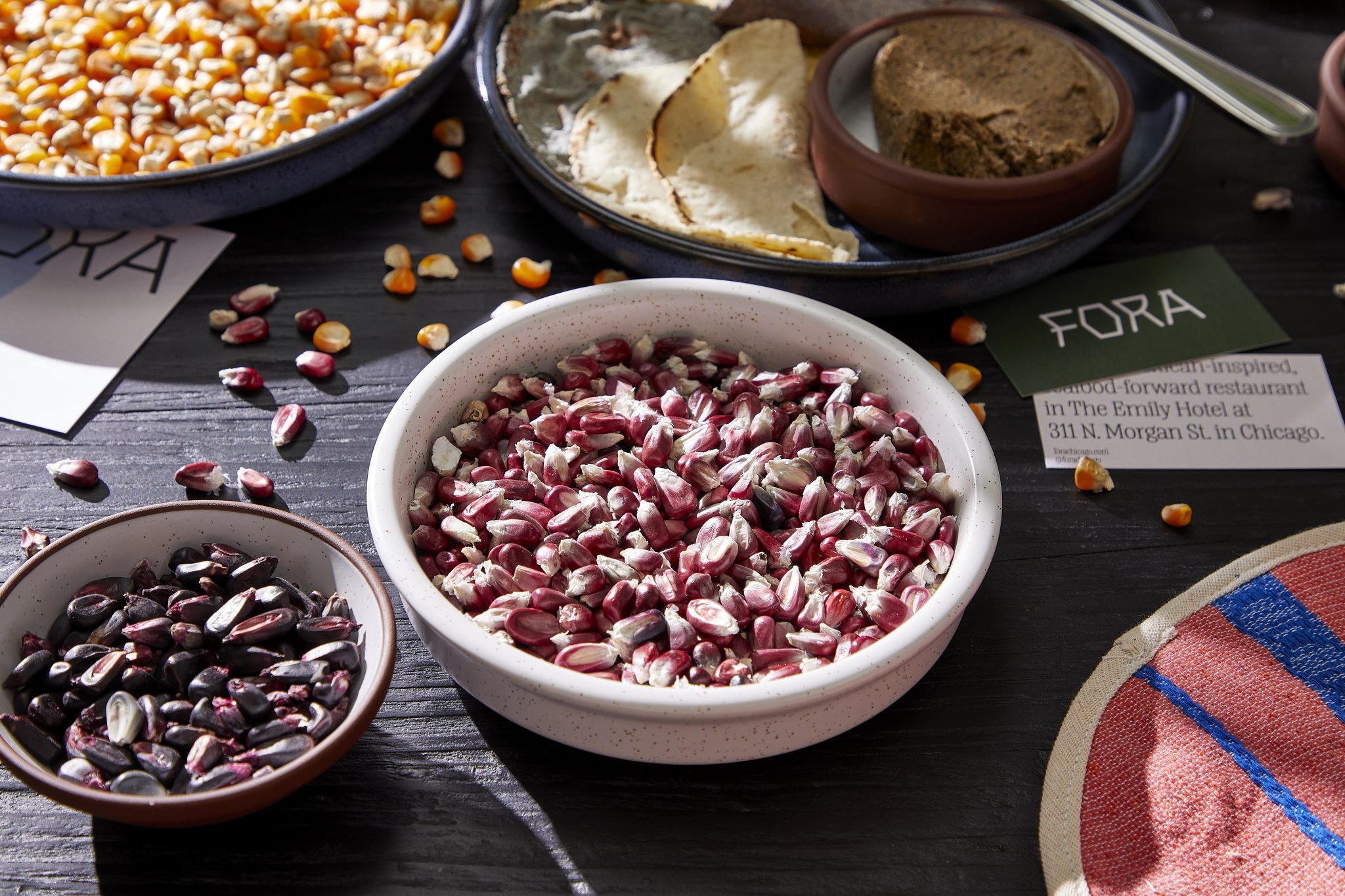 At the Jardín Etnobotánico in Oaxaca, I was introduced to teosinte, a weedy plant that looked like ambitious crabgrass. The waist-high, many-stemmed plant is unassuming but hides a secret that would make it astonishingly important. That secret is a rare trait known as a jumping gene, a bit of genetic material that breaks away from the plant’s chromosomes and creates something new. It was this trait that turned teosinte into the plant known as maize. This jumping gene would also enable corn to continue changing, developing into hundreds and then thousands of varieties, more than any other crop species in the world.

I was in Mexico doing research for my book “Midwest Maize,” which recounts the long history of what we in the United States know as corn. The book was where I expected the research to take me; a boutique hotel in Chicago’s Fulton Market area was not. But a few days ago, I found myself admiring rows of heirloom corn, along with other useful and mostly indigenous crops, on the roof of The Emily Hotel, in the company of the hotel’s senior director of food and beverage Billy Caruso and executive chef Matt Danko.

Caruso relates logistics as Danko shares vision and purpose. The dirt on the roof is four inches deep, Caruso says, while keeping an eye out to make sure we don’t get caught by the automatic sprinkler. “This is a labor of love,” Danko says as he plucks and hands around tiny, flavorful tomatoes from a nearby plant. “We want to be smart about what we grow. We can’t supply all the food we need, so we focus on specialty stuff.” He points out the shishito peppers and shiso leaves, and then turns to a row of raspberry bushes. “We get forty to sixty pounds of berries from our berry patch,” he says, adding that they use a company called The Roof Crop to aid with the garden. The Roof Crop brings the necessary expertise to rooftop farming, but they also supply plants that are ready to produce, as the restaurant can’t wait years for plants to mature. This approach, along with regular trips to the farmers market, works well for Danko in his pursuit of the seasonal. The position of plants is also important, he says. “Corn needs a lot of sunlight. That’s why we have it along this edge of the building, where nothing blocks the light.”

Stopping to mourn two towering sunflowers that didn’t make it through the previous day’s windstorm, Danko guides us from the garden, through the rooftop movie theater and past the coffee bar, to the elevator. We descend to the coolly elegant lobby, where the restaurant, Fora, is located. This restaurant is the primary focus of the plans Caruso and Danko have been sharing. The conversation turns to corn and Mexico.

Caruso, who lived in Texas, shares that Mexico was where he and his family went for holidays. “Mexico was always special. I loved everything, but what they were doing with corn really blew my mind.” Danko adds, “Pursuing that inspiration, we experimented with corn, and then turned to investigating the regions, the diverse types of corn, the different dishes. So, the ideas here are rooted in Mexico, but with our own voices. I combine what we’ve learned from Mexico with the classical ideas and techniques I’ve acquired working with such chefs as Curtis Duffy. It’s more about finessing than either transforming or mere copying. And corn isn’t in everything, but it is at the core of what we’re doing. It is a substantial presence on the menu.”

The restaurant orders their varieties of corn in sixty-five-pound bags. Impressively, they do their own nixtamalization, the process created millennia ago by indigenous people, who used an alkaline solution to make dried corn both more nutritious and easier to process. In fact, nixtamal is a word from Nahuatl, the language of the Aztecs, and it refers both to the treatment (nixtli means “ashes,” the source of the needed alkalinity) and the result (tamalii, which was the resultant masa dough). Today, calcium hydroxide (or cal) is used instead of the ashes (which make lye), but the process has changed little since it originated in roughly 1,000 B.C. And while you may not need to know that to enjoy the food at Fora, it speaks well of their dedication to tradition. Of course, you can’t help but experience the results, as corn is a key element in so many dishes, perhaps most notably the tortilla service that takes the place of traditional bread service.

The tortillas arrive nestled in a tortilla warmer. There are four medium-sized corn disks, one for each of the four types of corn in the kitchen. The differences are not startling, mostly texture, thickness, a bit of color. The freshness is obvious. They are served with butter that has been mixed with recado negro, an ancient Mayan seasoning made of burnt spices and tortillas. Letting the recado burn was a challenge, but a worthwhile one, Danko says. The flavor in this application is subtle, at least if you’re accustomed to recado negro as a sauce.

The first dish I tried combined elegant technique and Danko’s interest in seafood. This flavorful dish offered meaty pieces of kanpachi in a pool of smoky puréed beets, sensational. But it was the next dish—tetela—that transported me back to Mexico. These folded tortillas stuffed with cheese and other ingredients, are a Oaxacan classic, and at Fora they’re more delicate, crisper, and more carefully plated than what one would find in Oaxaca’s markets, but it is no less authentic for being more exquisitely prepared. 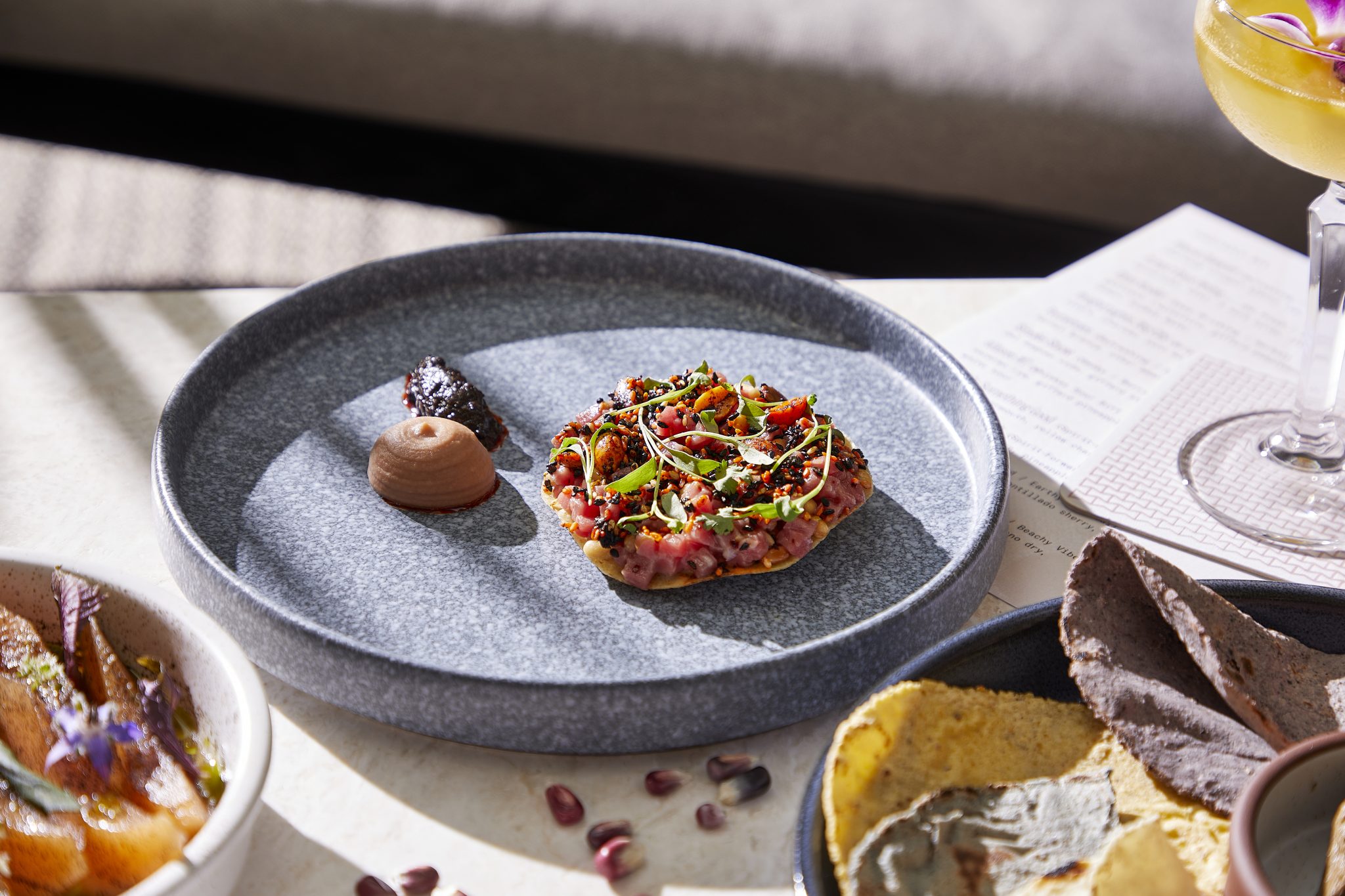 An equally Mexican dish, carne Apache, is a beef tartare, usually “cooked” in lime juice and served on a tostada. Danko calls this an homage to award-winning Mexican chef and cookbook author Pati Jinich. The tortilla was remarkably thin and crisp. The raw meat was excellent, and it was elevated to insanely good by the dab of “magic paste” served alongside it. “The magic paste adds a bit of the taste normally created by the Maillard reaction when meat is cooked,” Danko explains. A bright, light “salad” of chayote, apple and shiso leaves (from the roof garden) was a good palate cleanser.

Beverage manager Cristiana DeLucca explains her approach to the liquid side of the menu. The goal is to complement the food, not overpower it. “But we’re also a lobby bar,” DeLucca says. “We have the wines and imaginative cocktails to go with fine dining, but we also have beers and wines for those who are just in the lounge to relax or wait for the evening to begin.” DeLucca chooses to bring me the hotel’s signature daiquiri, made with Uruapan Charanda Blanco rum, saying that “if you can’t make a good daiquiri, you’re not a good bartender. It’s like an omelet for a chef.” The daiquiri assured me that DeLucca is an exceptionally good bartender. It was the perfect foil to the rest of the meal.

At Fora, the vision, the setting, and the people involved have created a delightful and evocative package. Danko sums up his feelings about the future, “I will work tirelessly to discover something, but then I want to start something new, and this combination of seasonality and exploring regions gives me the chance to do that again and again.”