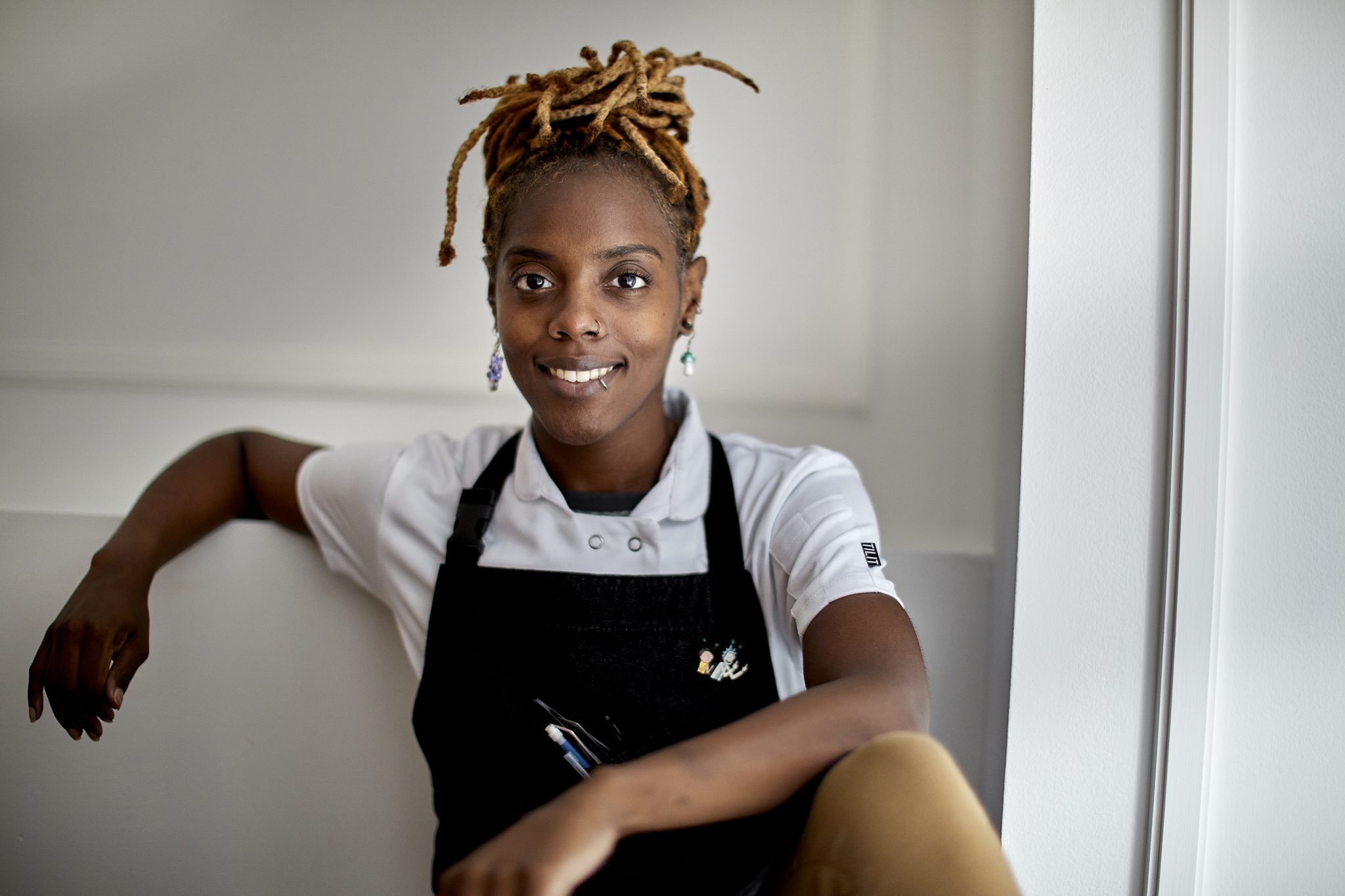 Update: After we published this story, Venteux’s publicist reached out to say that “unfortunately the Venteux team had to part ways with Whitney very recently.” We’ll update if we get more information.

“I will be changing most of the menu,” she says.

Sure, there will still be the dishes one thinks of when they think of a French brasserie: oysters, frites and the like. But McMorris, who at thirty is young for an executive chef and is one of the few Black women running a kitchen in the city, plans to bring in more global influences.

“Who influences French cuisines besides the French?” she says. “Vietnam, Morocco, Germany…”

McMorris is classically trained––she studied at Le Cordon Bleu in Chicago—and has spent extensive time pouring over traditional French dishes as well as recipes from other foodways.

“One challenge has been, how can I dive into this world to create a sense of nostalgia or home for people from these places or cultures, and how can I make these dishes as authentic as possible?” she asks.

Now, she feels confident she can bring in everyday French dishes Chicago diners might not be used to, such as snail soup; she can swap traditional ingredients for those she prefers, like using quail instead of chicken, and she can bring in more French elements.

“I’m excited to not be boxed in but still offer French cuisine and some sort of fusion, where I can also be creative and have the menu be a reflection of me as a chef,” she says. “It’s traditional, but also stepping away from tradition. I like to take things from the era of the 1700s and 1800s, but today is 2022, so as chefs it’s our responsibility to create new trends.”

This is coming from someone whose mother used to call her a “picky kid.”

“My family would tease me about how I ordered and what I ate,” McMorris says. But they also fished, gardened, and lived a farm-to-table lifestyle that rubbed off on her.

“I believe cooking just found me,” McMorris says. “As a kid, I was able to understand food, but I didn’t learn until I got to college that there are different tastes on the palate such as umami, sour, bitter, sweet. I didn’t realize those were things I had already understood without the terms.”

It might help that despite her allegedly picky eating habits, McMorris grew up obsessed with the Food Network, particularly Alton Brown, who she says gave insight into ingredients and focused on the science and history behind them.

“As a kid I had no idea what molecular gastronomy was, but watching Alton Brown was the closest I could get to a scientific approach and the culture and history of an ingredient.” 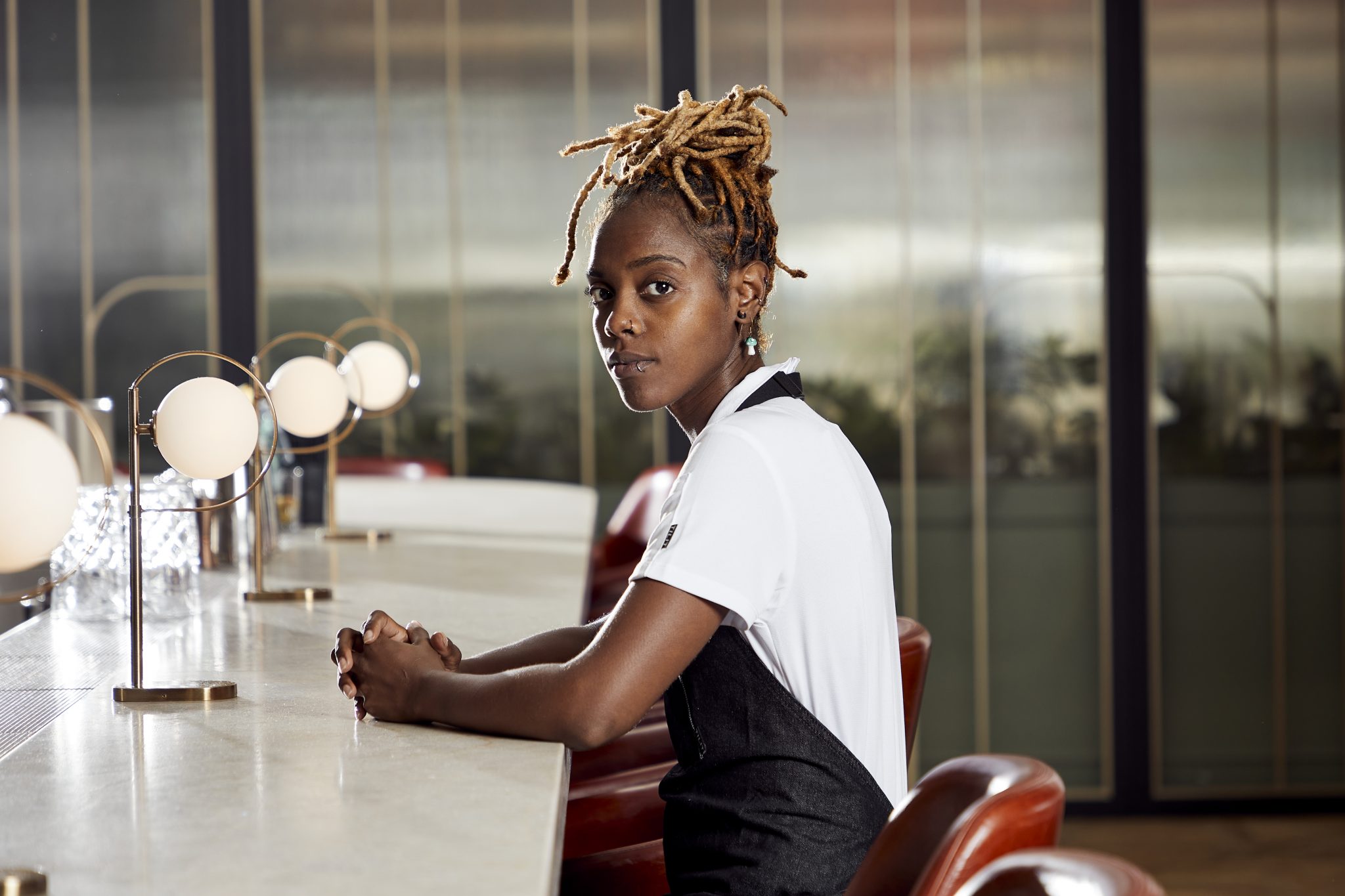 Her family habits, Food Network obsession and culinary school paid off. McMorris interned at Alinea’s The Aviary before working at now-closed Michelin-starred Moto, and she also held positions at Acanto, Terzo Piano and Quartino Ristorante, and was executive chef at Nordstrom in Chicago. In early 2022, McMorris joined the team of Bronzeville Winery as the opening executive chef, helping create one of the neighborhood’s first fine-dining establishments and garnering acclaim for her vegan dishes.

At Venteux, McMorris is testing herself again. For one thing, she’s navigating a corporate restaurant environment versus an independent restaurant, which she says feels different. She’s also cooking on Michigan Avenue, an area which brings in hundreds of tourists.

“I’m thrilled about the area. Magnificent Mile is obviously a beautiful location and a beautiful place to be,” she says. “And one thing I’m very excited about is the diversity. There are so many people from all different walks of life who visit the Mag Mile, so to interact with all the different people and cultures is something great, and I want to implement that into my menu.”

The new menu is in the works and planned for autumn or winter, but McMorris hopes diners are as excited as she is.

“I would say that I’m an artist. A perfectionist. I am precise and detail oriented. That’s me as a chef,” she says. “I like to create a sense of nostalgia. I like to build my menus out. It’s going to be an experience.”