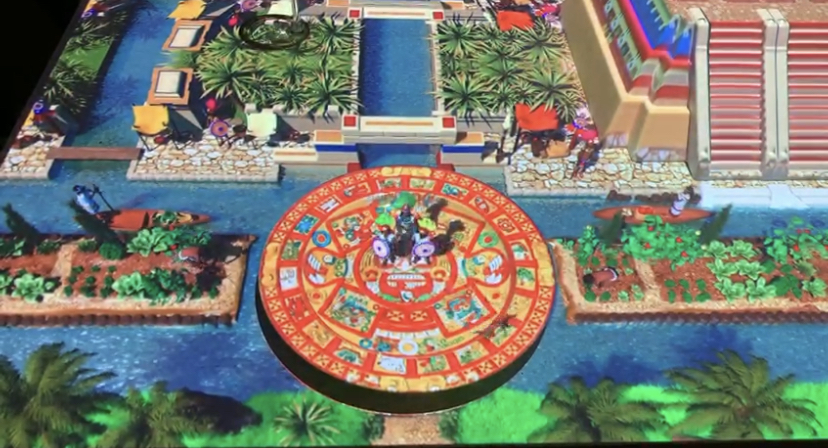 Chatting with other Chicago food writers before dinner, we shared our miserable experiences at another immersive experience, the well-publicized one for Van Gogh. Each of us had our own downbeat assessments of this sound-and-light show for Vincent which, if you haven’t been subjected to it, involves breaking up the artist’s genius compositions and spinning the images around the walls to some presumably crowd-pleasing music. Grandson Declan, who came with us to the San Francisco edition of the Van Gogh light show, summed it up well when he told me he found it “loud and scary.”

So, it was with some trepidation that we went to the Fairmont’s immersive 3D dining experience, but here’s the thing: it was fun. Not without glitches (hey, they just opened), but fun.

The “little chef” is not, as I first thought, the rodent who goes by that name in the movie “Ratatouille,” but rather a tiny, animated humanoid chef who guides us through dinner with historical commentary and culinary insights.

We’re first introduced to the world of the Little Chef as the lights go down and a voice asks us to remove from the tabletop all personal items like eyeglasses and mobile devices, lest they interfere with the imagery that is to be projected on the table. The white plates in front of each diner, initially illuminated with a bright white overhead light, are where much of the action is going to take place. 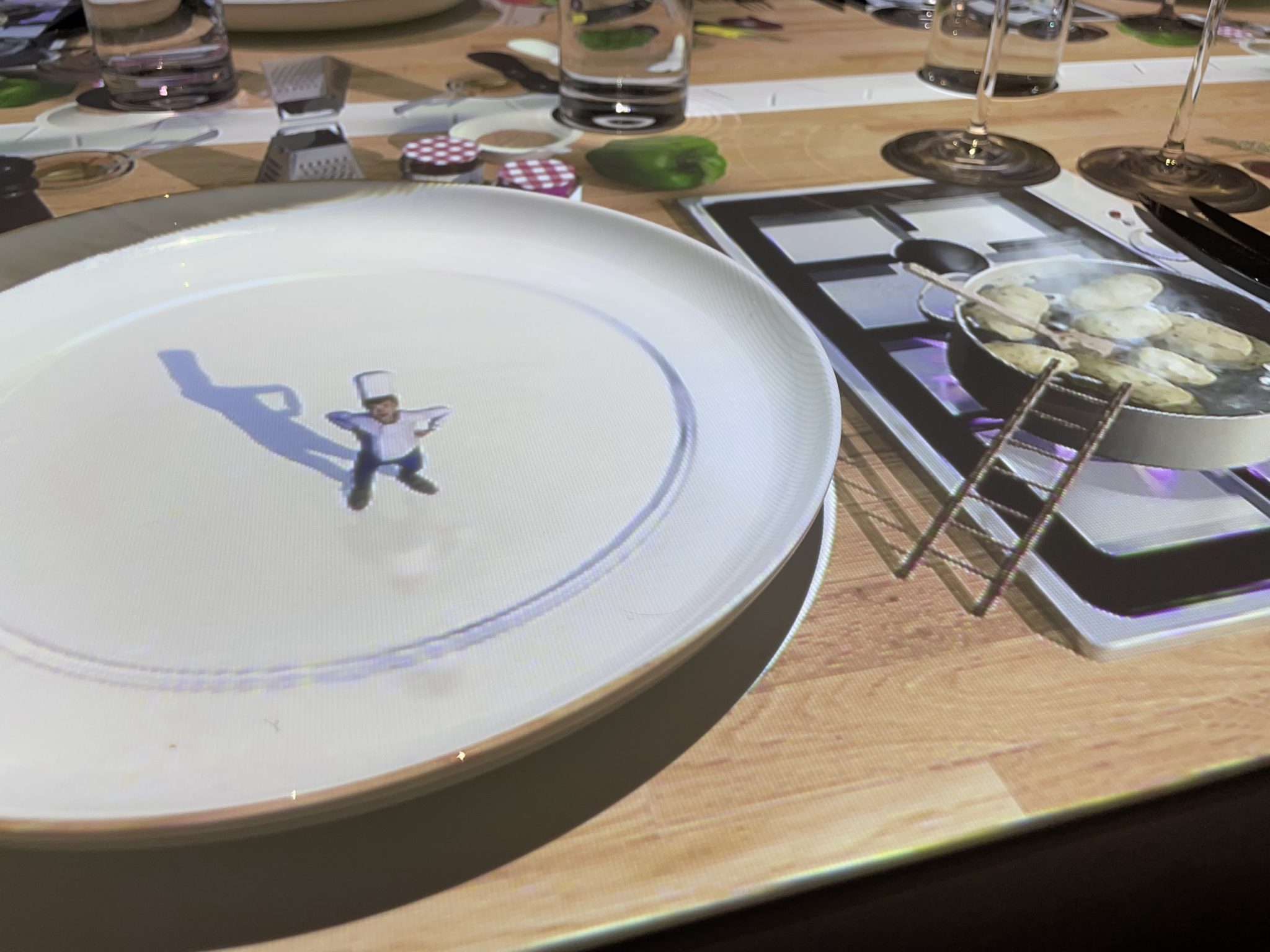 The plate and water glasses are the only tangible items on the table; the rest are projections/ Photo: David Hammond

The dining experience about to begin is an experiential product from TableMation Studios, which boasts that “our shows are the ultimate memorable night, using cutting-edge visual technology and effective storytelling through flavors, ingredients, sights, sounds, tastes.” They’ve done installations for some impressive clients, including the Culinary Institute of America (where Little Chef led a six-course Spice Trail-inspired meal prepared by CIA chefs), Facebook and Meta, and Ritz-Carlton Los Angeles.

Animated imagery is displayed on the tabletop using laser 4K projectors that are camouflaged within the existing ceiling décor. Diners do not need glasses or VR headgear to appreciate the show, and the characters on the tabletop seem to be somewhat three-dimensional… Oddly, even more so when viewed through an iPhone. I do not understand how this works, but it does.

It all starts with the projected image of Le Petit Chef, standing on each plate, introducing each diner to the experience to follow. The first animated sequence, I must admit, was cool. It was an abbreviated story of the tomato, how it was cultivated in South America before moving north to Tenochtitlan, the Aztec city that would become present-day Mexico City; animated conquistadors invade and trash the Aztec capital, grab some tomatoes, and we see their boat cross the ocean back to Europe, where the tomato is transplanted in a European garden.

I looked around the room as this was happening, and I must say, everyone seemed riveted to the action on the tabletop. Finally, as the story of the tomato faded away, servers quickly moved into the room to present each diner with a tomato-forward salad.

And that’s the way our dinner proceeded. A course, briskly followed by another animated sequence that set up the next.

A journalist sitting next to me said, “This would be excellent for introverts. You could just look at the table in front of you and not make eye contact.”

Indeed, I could also see how the Le Petit Chef experience would make for a potentially good first or blind date: both parties would be focused on Le Petit Chef and his stories, chatting while eating, and then taking a break to enjoy the show, without awkward silences. And the show is enjoyable: the tabletop animated actions are frequently clever and joyfully creative, kind of like something that Walt Disney Imagineers might dream up.

Overall, we dug the experience, but one area that might be improved is audio. Le Petit Chef’s voice has a shrill timbre. I know he’s little, and so he, according to the laws of cartooning, must speak in a high-pitched tone. However, if there’s any way to reduce the highs and enhance the lows, it’d be easier to listen to the wee man for ninety minutes. This is, however, an adult perspective, and younger people might be just fine with the squeaky narrator. 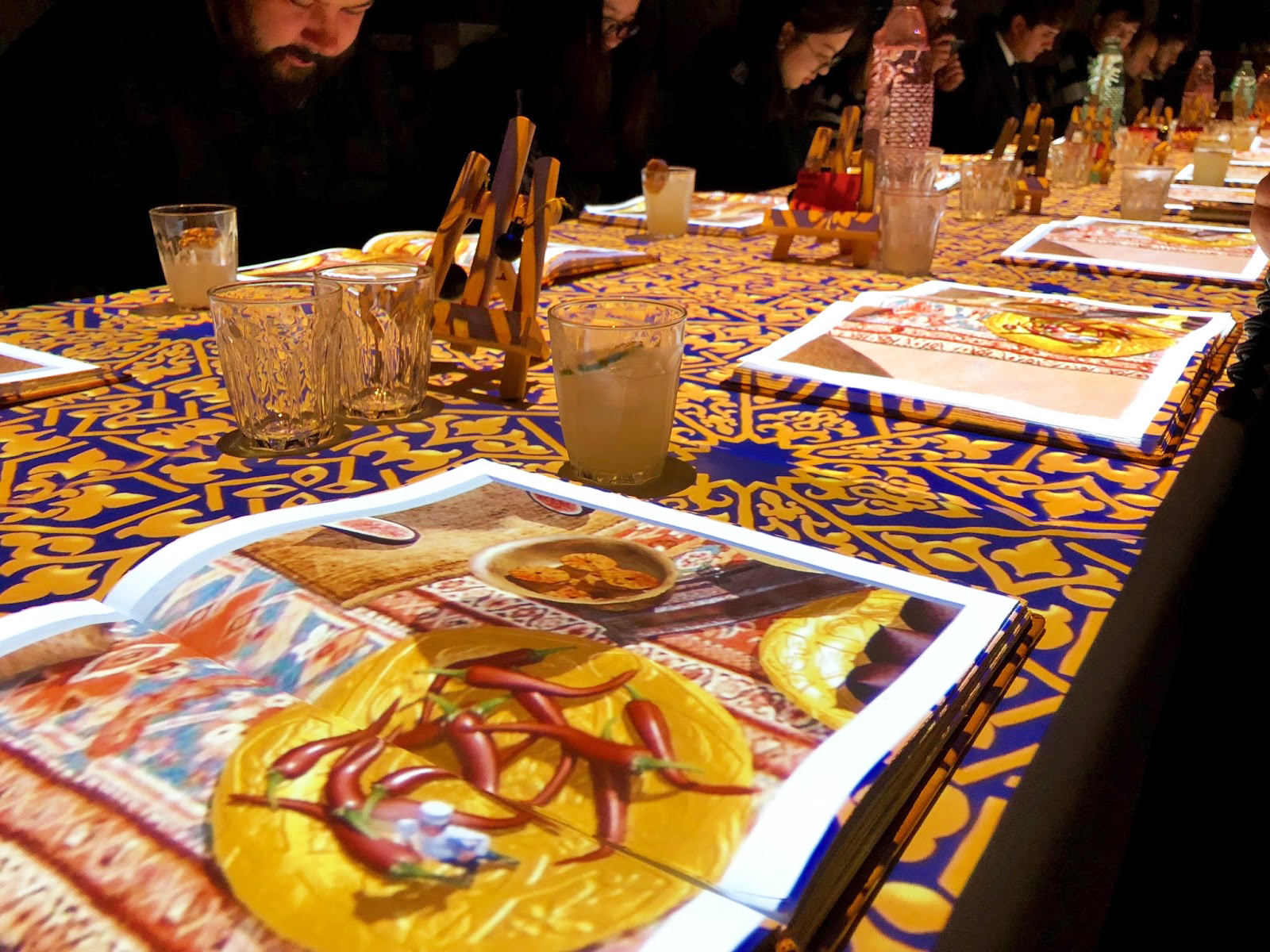 Dinner moved briskly, with servers nudging this slow eater along, which I get: everyone must be served the next course and then finish it at approximately the same time. The food was fine, but because everyone in the dining room had to be served almost simultaneously, the food had to be plated in advance, so it was pretty much room temperature when it hit the table. With more practice, I’m assuming kitchen and serving staff will be able to refine their service and deliver warmer dishes to diners.

“The food was fine,” good, higher-level banquet-type offerings, with the aforementioned salad, as well as a crisp plate of vegetables, chicken, beef and dessert. There were vegetarian options ready to be served upon request (although you should call ahead to clarify your dietary restrictions). And it really was fine, but, clearly, you come to Le Petit Chef for more than food. It’s an experience, a kind of circus, and if the bread seems to take a back seat to the circus, that’s probably as it should be: it’s the circus-like experience—full of sights and visual thrills—that will draw people to the Fairmont for a dinner with Le Petit Chef.

The Little Chef experience is not a pop-up; it will be a regular dining feature at the Fairmont at least through the end of 2023 At other locations where TableMation Studios have set up an installation, different menus and different shows are offered throughout the year.

It’s easy to imagine that children would enjoy dinners like this, though parents may find the $155 per person price tag (and another $42 for wine pairing) a bit daunting when planning a family night out. Nonetheless, Le Petit Chef might be a way to help kids understand the history of food and appreciate their dinner more—and that would be a good thing. And it’s certainly fun. Less certain is the TableMation claim that there will be “No more boring white tablecloths! No more having to make small talk! TableMation will spoil you all night long… You’ll never want to go to a ‘regular’ restaurant again!” 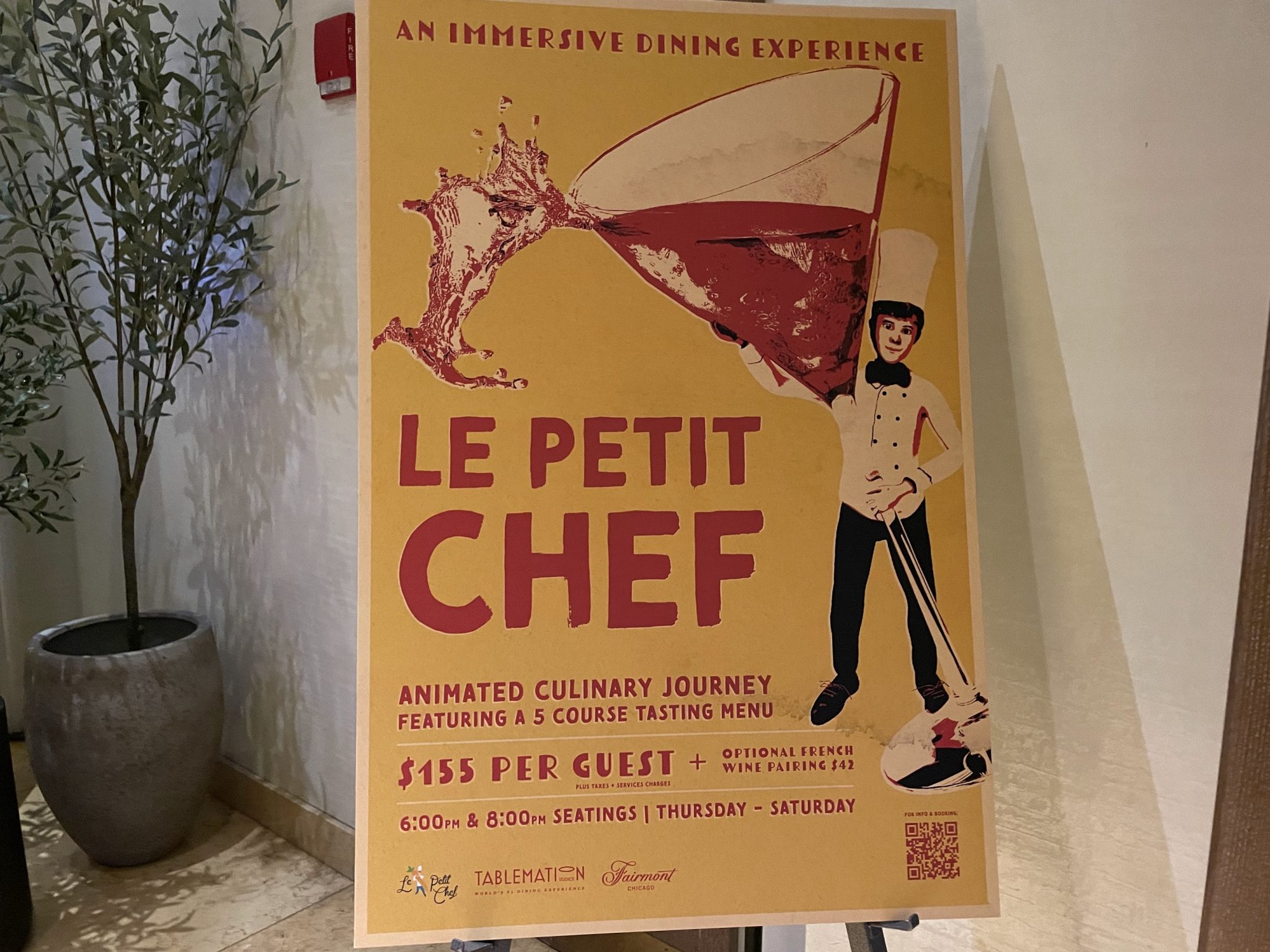