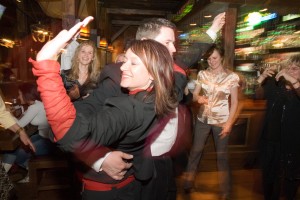 The Lithuanian priests had finished their meal of wild boar and zeppelins, and were putting on their coats when one said to Andrius Bucas, “I feel when I open this door I will be stepping out into the streets of Vilnius.”

Bucas is proud of that moment, because he has tried to make his restaurant a home away from home for Lithuanians. The ancient maps and portraits on the walls include one of Vytautas the Great, who ruled in the late fourteenth century when Lithuania was the largest country in Europe, stretching from the Baltic Sea to the Black Sea. The cooks and waitresses are Lithuanian, and much of the food is imported. Bucas says you shouldn’t have the breaded pork tenderloin without the mushroom sauce, with two kinds of imported wild mushrooms.

But the zeppelins are the key item. “People just wouldn’t come if we didn’t have them,” Bucas says. They are football-shaped, meat-filled potato dumplings. Inside is ground pork and beef, flavored with spices. One of the cooks, Lina Cepplinskiene, is a zeppelin specialist. In a procedure that takes two-and-a-half hours, she boils some potatoes, grates and squeezes others, then combines the two into a mash, which is used to cover the pork and beef mixture. The zeppelin is boiled for half an hour, briefly grilled and served with a sour cream-bacon sauce. The national dish. Lina says she learned how to make them from her mother, and she from her mother, for many generations. “Everybody knew how,” she says.

What is Bucas’ own favorite meal? Wild-mushroom soup, country-style duck with a slice of kugelis, sauerkraut and a Svyturys lager. For dessert, a Napoleon with cranberry filling.

Lithuanian music plays every evening, with acoustic music and candlelight on Friday nights; on Saturdays  a Lithuanian band and folk dancing bring enthusiastic Lithuanians out on the dance floor, dancing in line.

Bucas, 29, moved to Chicago twelve years ago, and noticed “There was nothing for Lithuanians.” He got a job at a downtown restaurant and opened a small book and music store near a church in Marquette Park, the historic Lithuanian community on Chicago’s Southwest Side. Business was good, and Bucas opened a larger store at 57th and Harlem, and added items like candy, bread and sausage.

Two years ago he opened Grand Dukes Restaurant and Deli, just south of 63rd on Harlem. He owns it with his sister, Asta Bucaite and her husband, Nerijus Gerdvila. His father recently joined the family, and helps with the research for the wall decorations as the resident historian. The Second World War was particularly hard on Lithuania, successively occupied by the Soviet Union, then Nazi Germany, then the Soviet Union again, which continued to control the country until independence was restored in 1990. But as you can see at Grand Dukes, Lithuanians cherish their traditional culture that has survived the worst of the twentieth century. 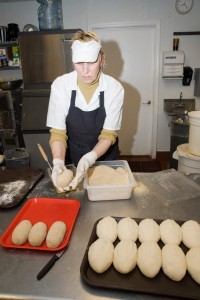 When Bucas first opened the restaurant, the customers were almost all Lithuanian, but this has broadened to include more Polish, Slovakian and American guests, he says. Now there are nine cooks and three helpers busy on weekends. He proudly notes the restaurant uses a ton of potatoes a week.

Bucas returns to Lithuania once a year to buy supplies, and keeps in touch with Lithuanian news on the Internet and on cable TV. There are occasional Lithuanian concerts at the Willowbrook Ballroom in Willow Springs. He says there was an influx of Lithuanians to Chicago some eight years ago, but some have returned, and the total now is about 80,000, concentrated in Lemont, Oak Lawn and Justice, with some in the north suburbs.

Last Friday was Lithuanian Day at Daley Plaza, chaired by officials of the Lithuanian Consulate. There was singing and dancing, and traditional fare including Kugelis, stuffed cabbage and bacon buns supplied by Grand Dukes. This Sunday, June 21, Grand Dukes will once again present the food at all-day festivities at 6526 Clarendon Hills Road in Willowbrook, culminating with the ancient rite of dancing around a giant bonfire. An even bigger two-day festival is being planned for September at the Summit Park District. These celebrations are all part of the commemoration of 1,000 years of Lithuanian history.

I’m really enjoying this series- thanks for the info!

Labas, I loved reading your article about the Lithuanian people and their triditions. I heard about your place from a friend of mine today and I looked into the site and I was so happy to find your place. I went to Lithuania back in 1988 and I will never forget the trip. I met many of my relatives on my Fathers side and I loved the country. I would like to go back some day but I think that will never happen. I intend to come to your restruant one day soon and I will bring some of my… Read more »